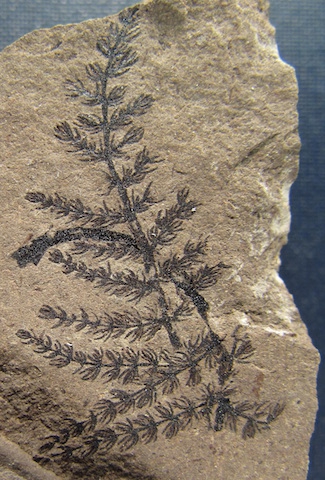 The article first proves that Montsechia vidalii is one of the most primitive angiosperms discovered so far. PHOTO BY CARLES MARTIN CLOSAS, UB

Sept. 4, 2015, Barcelona — An article published in the journal Proceedings of the National Academy of Sciences (PNAS) proves that the very early evolution and diversification of flowering plants or angiosperms on the Earth took place by colonizing freshwater aquatic habitats.

The study has been developed by an international team that includes Carles Martín Closas, professor in the Department of Stratigraphy, Palaeontology and Marine Geosciences of the University of Barcelona (UB).

The scientific study opens new questions about the antiquity and role of aquatic flowering plants in early angiosperm diversity and domination of world vegetation. Some of the experts who participated in the study are Bernard Gomez and Véronique Daviero-Gomez (Claude Bernard University Lyon 1, France), Clément Coiffard (Leibniz Institute for Evolution and Biodiversity Science, Germany) and David Dilcher (Indiana University, United States).

Some modern flowering plant phylogenies place the water lilies (Nymphaeales) as the most basal aquatic angiosperms. However, the Nymphaeales did not occur in the fossil record before 115 million years ago.

The article published in PNAS is centred on a Lower Cretaceous aquatic angiosperm  – Montsechia vidalii (Zeiller) Texeira –  which presents an atypical morphology and has been the focus of many scientific studies.

It is the first article proving that Montsechia vidalii, a species that lived between 130 and 125 years ago in the Iberian Peninsula, is one of the most primitive angiosperms discovered so far.

Closas, an expert on Cretaceous and Cenozoic micropaleontology and continental biostratigraphy at the University of Barcelona (UB), affirms that “the earliest age of Montsechia (ca. 130 million years) has been constrained by biostratigraphical analysis (charophytes correlated with foraminifera and ammonites), and demonstrates that Montsechia is one of the earliest known flowering plants.”

“Montsechia”  – he adds –  “is an unequivocal angiosperm having a closed and indehiscent carpel. The fruit contains a single seed which is borne upside down with the micropyle pointing toward the attachment and with the funiculum running ventrally from the placenta, at the bottom, to the hilum, at near the top.”

This same anatomy is found in Ceratophyllum, an aquatic flowering plant living today. Their underwater “flowers” have no typical flower parts such as petals or nectaries for attracting insect pollinators.

Montsechia was an aquatic angiosperm living and reproducing below the surface of the water similar to Ceratophyllum. It shows flexible axes, thin cuticle and rare stomata. The fruit has a pore near the apex through which the pollen tube may enter.

Montsechia is more ancient or contemporaneous with the aquatic plant Archaefructus, an extinct genus of Lower Cretacious angiosperm from China.

Closas notes that “this indicates that aquatic plants were locally common at a very early stage of angiosperm evolution and that aquatic habitats may have played a major role in the diversification of some early angiosperm lineages.”

The morphology and anatomy of Montsechia, including several reproductive features, suggest that Montsechia is sister to Ceratophyllum.

In addition, its very ancient age raise questions about the very early divergence of the Ceratophyllum clade compared to its position as sister to eudicots (most common group of showy flowering plants) in many recent cladistic analyses about the origin and diversification of angiosperms.


Related
Making the most of your R&D
OUT WITH THE OLD, IN WITH THE NEW
‘Centre’ of research: North America’s largest complex showcases its latest projects
Spotlight on Harrow