Business Management
The buck stops … where?

Exporters are feeling the pinch as the loonie continues to rise in value compared to the U.S. dollar. Economists expect the trend to continue for some time. 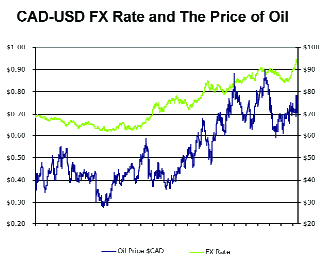 late 2006 and early 2007, exporters, including many in the greenhouse sector, saw some relief from the apparent weakening in the Canadian dollar compared with the U.S. dollar. However, this seems to have been short-lived.

During the first half of 2007, the value of Canadian dollar has floated between $0.84 and $0.95 per U.S. dollar and the increase has been particularly sharp in the second quarter. Economists and other constituents have begun to speculate that parity between the Canadian and U.S. dollar may occur for the first time in decades. The relative value of the Canadian dollar is established through the economics of supply and demand, just like other commodities.

Significant component of Canada’s exports are natural resources and other commodities.

In particular, oil has become more important to the Canadian economy. There has been a significant correlation between the price of oil (as priced in Canadian dollars) and the exchange rate over the past five years. This correlation has been approximately 84 per cent, which simply stated means that the Canadian dollar and oil prices tend to move in tandem. Correlation does not imply a cause and effect relationship, rather that they tend to relate to each other, thus as the price of oil increases typically the value of the Canadian dollar increases. The chart above demonstrates recent trends and the relationship.

Certain key factors impacting the Canadian dollar include employment, manufacturing exports and inflation. Increasing employment and manufacturing exports are signals of strength in the Canadian economy as a whole and will increase the value of the Canadian dollar. It is also likely that in a strong economy that base inflation may begin to rise. The Bank of Canada continually monitors the inflation rate within the country and will adjust interest rates to slow growth to ensure inflation remains at a reasonable level.

International investors continue to monitor interest rates in different countries to select investment markets. Increased investment in Canada increases the demand for its dollar on the world markets and will cause the value of the dollar to rise. The Bank of Canada is hinting at rate increases in the last half of 2007, which should support a higher Canadian dollar.

When examining the Canadian/U.S. dollar exchange rate, we need to consider the key factors impacting the U.S. dollar and the U.S. economy as a whole. At present there are a number of factors that have challenged the general U.S. economic health, including weakness in the housing market, current account deficit, and the Federal Reserve Policy. The soft housing market has challenged consumer spending and has slowed the US economy. As the United States is a net importing country, there has been pressure on its dollar. Many believe that the U.S. Federal Reserve may reduce interest rates to support the U.S. economy, which may have an adverse impact on the value of the U.S. dollar as more investors find other countries in which to invest.

Recently, there have been unprecedented mergers and acquisition activity in Canada by foreign players.

These acquisitions of Canadian businesses create a significant demand for the Canadian dollar, which in turn causes a change in the supply and demand balance pushing the Canadian dollar higher. As the investment markets and private equity houses are flooded with cash and other investment factors are favourable, M&A activity is expected to continue.

In the context of the foregoing analysis, there are a number of factors that indicate future strength of the Canadian dollar. It’s important that managers and principals of Canadian businesses that are “U.S. dollar sellers” should establish an effective financial and strategic plan and take proactive steps, including reducing costs, investment in technology to improve productivity, diversification of their customer base, and hedging U.S. dollar exposures to sustain profitability.


Related
IN CAIS YOU WERE WONDERING (PART TWO)
FROM THE EDITOR: August 2006
From the Editor: Fiscal and physical stress
Celebrating 30 years of industry service