Business Management
The ABCs of MPS

Growers throughout the world enrolled in the Dutch-based MPS program
are finding it as good for their balance sheets as it is for the
environment. 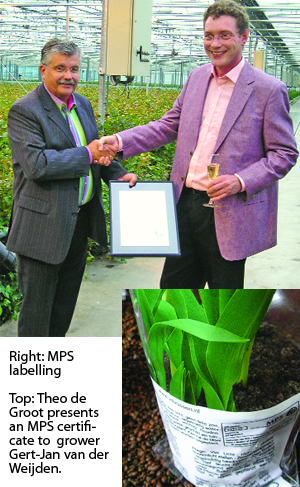 Growers throughout the world enrolled in the Dutch-based MPS program are finding it as good for their balance sheets as it is for the environment.

MPS is an international certification program that assesses and certifies the performance of growers on such factors as environmental impact, product quality and corporate social responsibility. MPS was developed in the Netherlands in the early 1990s by flower auctions and grower associations to reassure retailers and consumers of the environmental awareness and sensitivity demonstrated by the country’s flower production industry.

The MPS registration system requires growers to record their major inputs – crop protection agents, fertilizers, energy – along with waste materials. In some countries, the registration of water is obligatory.

Points are awarded in each category and growers are awarded an “A,” “B,” or “C” rating depending on how they compare to the industry average. This data is then used to set standards, which growers can study to see how they measure up to comparable growing operations, and how they can improve their operations.
“Growers can compare themselves with industry standards and adjust accordingly,” said MPS director Theo de Groot.

MPS has proven to be a great way to control input costs and boost production. On the occasion of its 10th anniversary in 2005, records of 790 companies who participated over those years were studied. Among the results:
•     The use of crop protection agents dropped by 23 per cent.
•     Energy costs dropped by 25 per cent.
•     Production levels increased by 33 per cent.

MPS in the Netherlands has grown from 1,000 growers its first year, to a peak of 4,000 just a few years ago. It currently remains steady at 3,300 growers. (Industry consolidation – larger growers acquiring and incorporating smaller farms – is cited as the major reason for the enrolment decline.)

For Dutch growers, MPS makes good business sense. It’s estimated between 60 and 70 per cent of all products sold in Dutch auctions is MPS certified. Most major European retailers require MPS certification.
MPS is active in all major flower-producing areas, including Africa, Latin America, Israel, Europe and Asia. Growth in international areas has been slow but steady and is currently around 430 growers.

International registrations are growing. A pilot project is being launched in China with about 200 growers. Japan is also launching its own program, with indications of between 50 and 200 growers taking part initially. There is also interest from growers in Mexico, Brazil and Taiwan.

To this point, there hasn’t been much interest expressed by North American growers.

MPS is currently focused only at the floriculture industry. However, a number of participants also grow vegetables. MPS officials are currently in discussion with another Dutch certification body, already active in the vegetable sector, to discuss ways to expand their levels of co-operation or to merge the two companies. A declaration of intent was signed last July and talks are continuing.

MPS is a non-profit foundation. Rates are set to cover program expenses. Each country must be self-supporting. The fees depend on the number of growers, the size of nurseries, and the distances between the farms, among other factors. For example, it’s more efficient to operate the program in the Netherlands with its 3,300 participants, than in Africa, where the 50 to 60 participating growers are spread throughout four countries.

MPS is a business-to-business label; it is not directly marketed to consumers. However, there is a consumer label for sustainable grown flowers and plants, which is called FFP (Fair Flowers Fair Plants).

Growers certified for MPS-A (the highest level of environmental certification) and MPS-SQ (Socially Qualified) or similar labels are able to supply their flowers and plants via this consumer label, along with some additional FFP requirements.

MPS is constantly monitoring market developments. Therefore MPS is able to offer market-orientated certificates for both growers and traders. A perfect example is MPS-GAP. This certificate is based on the criteria the Eurep (Euro-Retailer Produce Working Group) laid down for themselves in Good Agricultural Practice (GAP). The requirements relate to food safety, environmental impacts, and labour standards. As a result, MPS formulated the comparable MPS-GAP certification scheme for flowers and plants, which fulfils the Eurep demands very well. MPS-GAP was the first scheme that was benchmarked against the EurepGAP scheme.

“MPS opens doors that otherwise might not be open,” said de Groot. “Certification is the instrument for the individual companies and the respective organizations to improve the level of management and quality, to stimulate the right innovations, to continue in and improve the markets, and to improve the image of the products.”
• www.my-mps.com