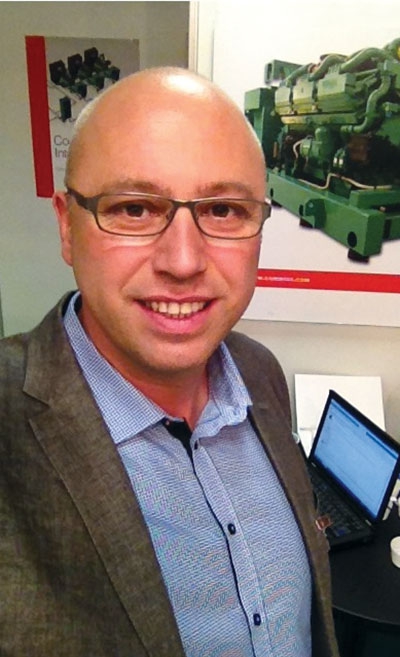 Commercial greenhouses are sophisticated operations that, today, are growing plants more efficiently than in previous generations through the use of new technologies that make better use of light and air.

Key ingredients in this natural resource mix are heat and carbon dioxide – both of which are produced alongside electricity by generator sets. It is no surprise that cogeneration solutions are increasingly popular in greenhouses, and gas-fuelled generator sets in particular are proving their all round viability.

However, this “separated production,” as it is known, loses approximately half the energy input of the power station in the form of heat to the atmosphere. This waste of energy is far from ideal, and opportunities should always be taken to avoid it wherever possible.

At locations where electricity and heat are required at the same time, it is always preferable to explore the options for cogeneration, also called combined heat and power (CHP). When heat can be used directly at the location where electricity is produced, it does not go to waste.

The principle of CHP is simple: a diesel or gas-fuelled engine drives an electrical generator, producing the required electrical power. Meanwhile, heat is recovered from four sources: the engine’s jacket cooling, the lube oil, the intercooler, and the exhaust gas.

In total, cogeneration can typically recover 95 per cent of the produced heat, and this heat is transferred to the network of heating pipes through heat exchangers.

As well as making use of recovered heat, well-designed and implemented cogeneration is also good for the environment, since it consumes less fuel and releases lower levels of emissions into the atmosphere, especially if highly efficient lean-burn gas engines are used.

The fuel savings are dramatic. For the same production of electricity and heat, 30 per cent of fuel can be saved with cogeneration compared to conventional “separated production” of heat and power, as shown in the chart at top of the page.

GAS-DRIVEN CHP AND CO2 PRODUCTION
Green plants fuel their growth by absorbing carbon dioxide from the air and water from the ground, which they synthesize into complex hydrocarbon molecules such as glucose. Energy from sunlight energizes the synthesis.

The synthesis of hydrocarbons is known as photosynthesis, and the basic equation of this photochemical reaction is as follows:

Extra CO2 to augment the level inside the greenhouse can be sourced in a number of ways, including exhaust gases from heating and, less frequently, the administration of pure CO2 purchased commercially.

However, CHP makes it possible for the required CO2 to be obtained from the exhaust gases of a gas-fueled engine. This becomes viable once certain components of the gases have been reduced to below the level that would be harmful to the plants. The gas components to be reduced are specifically non-methane hydrocarbons (NMHC) and nitrogen oxides (NOx).

Treatment of the exhaust gases is achieved by Selective Catalytic Reduction (SCR) using the widely available chemical urea as a reductant to produce CO2 in a three-step process.

First, an exact amount of urea proportional to the NOx level is injected into the hot exhaust gases. The urea is transformed into ammonia (NH3) by a process called pyrolysis. In this catalytic part of the process, the nitrogen oxides react with the urea, forming nitrogen and water.

Secondly, a part of the NMHC is transformed into carbon monoxide (CO).

Finally, the CO and the NMHC are transformed into CO2.

Plants require the most CO2 when conditions are optimal for photosynthesis – in other words, when there is sunlight – and at these times the plants have minimal need for heat. Since a generator set produces heat and CO2 at the same time, heat produced by the generator set throughout the day is normally stored in a buffer tank for use during the night.

There are two ways of exploiting this difference.

Either the greenhouse can run on a higher concentration of CO2, stimulating plant growth and yielding a higher efficiency per square metre of surface area. Or, the CHP can produce the same quantity of CO2 as a gas burner would, but only half the quantity of heat.

Which method of the two is used depends upon many factors such as the type of plants, the time of the year, the surface area of the greenhouse, or the capacity of the heat storage tank.

CONCLUSION
CHP for heat and CO2 production for greenhouse applications can pay back in a remarkably short period of time, ranging anywhere from one and a half to three years in favourable conditions.

Gas-fuelled generator sets are highly suitable for this application because of their excellent environmental characteristics and their efficient production of heat and electricity.

When implementing a solution, the designer has a number of points that need to be carefully considered. For the dimensioning of the CO2 equipment such as tubes and fans, for example, it is important to keep in mind the excess air factor, defined as the amount of air admitted divided by the minimum amount of air required for the complete combustion of a fuel.

The amount of air for complete combustion of a fuel depends upon the composition of the fuel.

Combustion of one cubic metre of natural gas at normal temperature and pressure (1Nm³) needs approximately 8.5 Nm³ of air. Lean-burn engines operate at a high excess air factor (above 1.5) in order to keep NOx production to a minimum. Consequently, a CHP unit produces a larger volume of exhaust gases than a burner.

From the point of view of pressure loss, it is very important that components installed in the exhaust gas system, such as the SCR, heat exchanger, condenser and silencers, are selected precisely. Too much pressure loss in the exhaust system causes a poorly working engine!

Design and installation of the CHP unit needs to take these and other factors into account. With the right design of CHP unit, this application of cogeneration has been shown to be commercially viable.

Greenhouses around the world are increasingly recognizing these benefits and are adding CHP to the other technologies that help them promote plant growth and operate more profitably.

Stefan De Wit started out as an industrial designer working on technical installations in the brewery, pharmaceutical and petrochemical industries. In 1997, he became a project manager responsible for cogeneration and tri-generation units for industrial, landfill, biogas and greenhouse applications. Since 2011, he has been a project manager and energy auditor at Cummins for all types of combined heat and power plants, from greenhouses and social housing to industrial applications. He has degrees in Economics, Construction Technology, and Management.