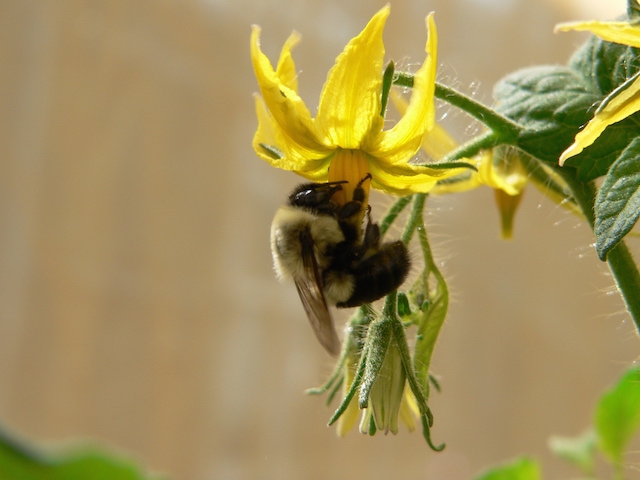 Dec. 21, 2015, Mississauga, Ont. — For over a century, chemical pesticides have been in use to control pests and increase crop yield. However, chemical pesticides present a number of problems that negatively affect the environment, as well as creating health risks for consumers and agricultural labour.

Chemical pesticides can linger in the atmosphere, in the ground, and in waterways. Furthermore, while the chemicals are meant to fend off pests that are known to destroy crops, they are not meant to be ingested. Along with being linked to various diseases, chemical pesticides deplete the nutritional value and contaminate crops.

Due to an increasingly green-minded and health conscious society, there is a growing demand for organic and effective pesticide solutions within the agricultural sector. Bee Vectoring Technologies International Inc, a development-stage company that owns a patent-pending bee vectoring technology, is on the brink of an economic and environmental breakthrough for the agricultural market with their innovative inoculum dispenser system.

HARNESSING THE POWER OF NATURE

The development of Bee Vectoring’s revolutionary dispenser system began nearly 15 years ago. While working on the company’s bio-control product that controls pathogens and protects high-value crops, Dr. John Sutton encountered issues regarding product delivery to crops that are in bloom. Through the recommendation of a colleague, Sutton contacted Dr. Peter Kevan, a bee expert. The collaboration of Sutton and Kevan would later result in Bee Vectoring’s sustainable solution that both increases productivity within the agricultural market, while removing a negative impact on the environment.

“BVT was established with a view to providing effective protection of flowers against disease organisms and insect pests, which is critical for achieving high yield and quality in many crops.”

BVT’s inoculum dispenser system is incorporated into the lid of commercial bumblebee hives. The dispenser is a removable tray that contains a powdered form of the inoculant crop control and a mixture of products that allows the bees to pick up the product on their way out of the hive.

When the bees come into contact with the flowers, they deposit a tiny amount of the Vectorite powder on every plant that they visit – and they visit about 10 flowers every minute.

“We have intellectual property rights and patents pending on three principal issues: the delivery system which is the hardware, the powder, which is the vectorite, and our own bio control which we call CR7,” said Collinson.

“The complete system increases yield, produces higher quality product and increases and improves shelf life without the use of chemicals and water. The result is going to be better for the environment.”

HAVE NO FEAR OF BUMBLEBEES

Commonly, bees are feared and are seen as pests. However, a world without bees is a world that is unable to feed itself.

Commercially used specifically for pollination for greenhouse crops, bumblebees have been in use for over 20 years.

These worker friendly and docile insects are ideal pollinators. Most of their lifespan is spent collecting pollen used to feed their developing offspring. Therefore, bees come into contact with 70 per cent of everything that we eat and are used for pollination in 99 per cent of greenhouses.

Some 87 of the world’s 115 most vital crops require pollination to produce fruits, nuts and seeds. Without bees, the $3 trillion agricultural produce market would crumble.

Protecting this market has created the need for biocontrol products. At a growth rate that’s increasing 16 per cent every year, biocontrol is the fastest growing segment in agriculture.

Typically a found chemical product that is a natural enemy to a pathogen of a crop, it could be an insect that eats another insect or a fungus that attacks insects. The true secret to Bee Vectoring’s crop control technology is its versatility within that market.

“What makes us unique as a company is that we don’t just use our own biocontrol,” said Collinson. “We can actually use other people’s biocontrols inside our system and deliver multiple pathogen controls using one tray or one system, so think of us as inventing a syringe, and in that syringe we can either put insulin or antibiotics or all kind of different things.”

A YEAR OF MILESTONES

For Bee Vectoring, 2015 has been a year of major milestones. In October, BVT opened the doors of its Ontario-based, 7000-square-foot state-of-the-art production and research facility. The facility will produce up to $100 million annually in products used within the company’s organic pesticide systems.

BVT has raised approximately $4.2 million over the last six months to fund the build-out of the facility and to accelerate sales and marketing.

Agriculture is currently experiencing a modern revolution, and the potential within the natural pesticide market are enormous.

“We’re opening up a whole bunch of food opportunities, and we are opening up organic processes,” said Collinson. “This should under all good conditions be a very successful company. It’s a very large business to be in. Agriculture as you know is going to be one of the fastest areas of growth. We’ve got to grow 70 per cent more food in order to feed this population over, roughly, the next 20 years.”

The future of agriculture rests on the wings of the honeybee. With their revolutionary dispenser system, Bee Vectoring is sure to be the buzz of the industry.