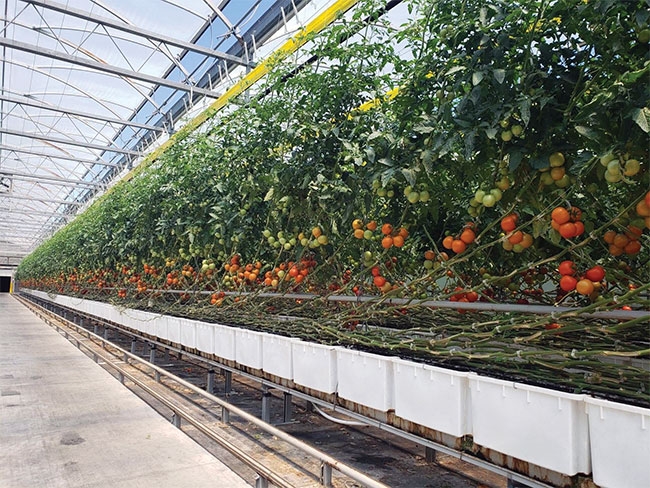 This horticultural supplier has designed a new container that satisfies the substrate volume requirements of the Canadian organic standards. A.M.A. Horticulture

Greenhouse growers looking to enter the organic market may be interested to find that, among a list of requirements, substrate volume is mandated as well.

To meet Canada’s organic standards, containerized, staked greenhouse crops such as tomatoes, sweet peppers, cucumbers and eggplants must be grown in containers at least 30 cm in height, with minimum soil volumes of 60 L/m2.

“Organic agriculture is based on soil and the organic principles are requesting that you ‘mimic’ nature,” explains Nicole Boudreau of the Organic Federation of Canada, “so, imposing a minimal soil requirement ensures that the plants are provided nutrients made available through the maintenance of soil fertility.”

One of the main challenges that growers faced was finding a container that would satisfy these requirements. Growers were using containers that were too large or too small, and they would have to drill drainage holes or make other amendments, says Shawn Mallen, manager of hydroponics and manufacturing at A.M.A. Horticulture.

“Some organic growers are on the trough system that run the length of the greenhouse,” adds Rick Bradt, managing director of A.M.A. Horticulture. “But the trough is more difficult to fill…[and] because it’s a fixed structure in the greenhouse, it’s very labour-intensive to empty.” There’s also a good chance that the structure holding the trough will be damaged and will need to be replaced or repaired.

With their growers’ needs in mind, the horticultural supplier built a solution that not only met the requirements, but kept inputs costs low.

“It had to have the proper drainage, the right height, [and] had to fit on existing troughs that the growers had, so it’s less capital expenditure for them,” Mallen explains. “For somebody wanting to grow on the ground, we put some legs on it so it would still drain and they would have the ability to collect it.”

The A.M.A. 60 Growing Container has already been put to commercial use by two Leamington-based vegetable greenhouses over the past two seasons. Both operations are now looking to expand their organic acreage using the container.

“If you’re in a trough system that’s 300 feet long and you get a root problem or soil problem, then potentially you risk that whole row being affected,” Rick points out. It’s easier to clean these [containers] individually than to clean an entire 300-foot row and make sure you disinfected it properly so there’s no carryover of pathogens.”

For gutter-style growers considering organic production, the container offers a more flexible option without needing to rebuild gutters or build a new greenhouse, says A.M.A. managing director, Connie Bradt. “If they find out in two to three years that the market has changed, they still have their greenhouse to go back to a traditional style of growing.”

Designed with growers in mind, the heavy-duty container has notches for ease of stacking and nesting, and it comes in a standard white colour to keep young roots cool. Unlike most other systems, the container is estimated to last between five to 10 years, depending on use.

With the ever rising demand for organic produce and heightened awareness around food security, it’s no surprise that field crops traditionally grown outdoors are starting to move into indoors systems. “We built [the container] for an organic crop, but knowing that more and more field crops are going to be moving into the greenhouse in the future, it is something that can be modified for that,” Connie says.