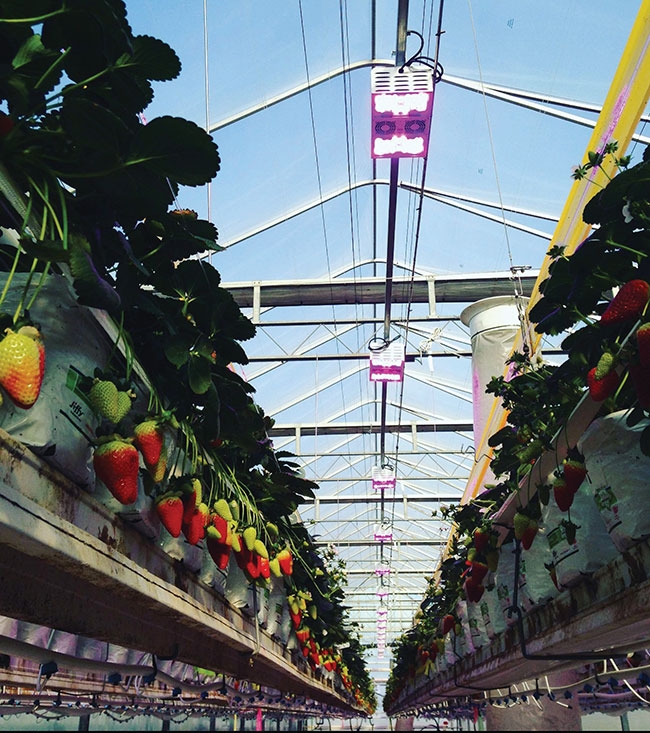 With greenhouse strawberries becoming increasingly popular among consumers, how can supplemental lighting be used to help improve their production and potentially open avenues to other berry crops?

LumiGrow’s vice president of research Dr. Melanie Yelton says it is now well accepted that day-neutral strawberries can be more effectively grown under LED lighting, because heat management and other factors make growing under HPS more challenging. Their trials with day-neutral strawberries have shown that a medium level of supplemental LED lighting can help maximize profitability. Strawberries need about 15 to 20 mols of light per square metre per day.

Constant strawberry production is desirable, with staggered flushes of fruit. To maximize each stage of crop production, LumiGrow has studied dynamic light spectrums in lettuce. “Lettuce is our main experimental crop and we’ve studied extensively the use of one spectrum for young plants, another for flowering and another for maturation,” Yelton reports. “In tomatoes and strawberries, we’re also looking at spectrums that increase aromatics, flavour and antioxidant content in the fruit. We want to push growers to experiment with LED light using different crop varieties, along with using different temperatures. We don’t tend to see a single light recipe as optimal for all varieties and growth stages of strawberries or tomatoes or for most crops. Plants utilize light dynamically as they grow.”

When planning strawberry production, growers should analyze their existing light transmission. “This is different for every greenhouse,” she notes. “After we have looked at light transmission, we use software to create a comprehensive light plan. It’s critical in that plan to make sure light will be uniform. We need to make sure fixtures are hung properly and double-check that the light produced is what we expect.”

The next steps are to look at varieties and production goals, and to go over costs, as Yelton notes that strawberry production could involve increased labour costs compared to other crops. The last step is to set up a trial area. “With strawberries, you don’t want to test with a trial so small that it’s not indicative of major production,” she says. “I like a half acre or acre with supplemental light. It’s not an accurate test otherwise and an area that size also gives the opportunity to look at multiple varieties. It’s typical to have several [day-neutral] varieties grown to market simultaneously, allowing for staging of flushes as well as balancing complementary flavour profiles.”

Raspberries and blackberries
Netherlands-based greenhouse research firm Delphy looked into earlier and increased production of year-round raspberries and blackberries under LEDs. Delphy soft fruit expert Willem van Eldik says it’s already established that greenhouse productivity of these berries is higher than field production. The blackberry variety they grow is Loch Ness and the raspberry varieties are Kwanza, Aurora and Enrosadira.

Growing both types of berries has previously been tried with Son-T lamps, but Van Eldik says neither blackberries or raspberries responded well, even after adding extra far-red light. He says the current LED ‘recipe’ they use is tailored to blackberry. From November 2017 to February 2018, Delphy applied the amount of light needed for early cultivation in April/May – 18 hours of day, from midnight to 6 in the evening at 200 µmol/m2/s. Of that, 120 µmol is top illumination and 80 µmol is interlighting. Van Eldik says this combined arrangement gives the optimal light distribution for maximum photosynthesis. “What we are going to investigate now,” says Van Eldik, “is whether we can achieve full production with LED lighting from the beginning of March.”