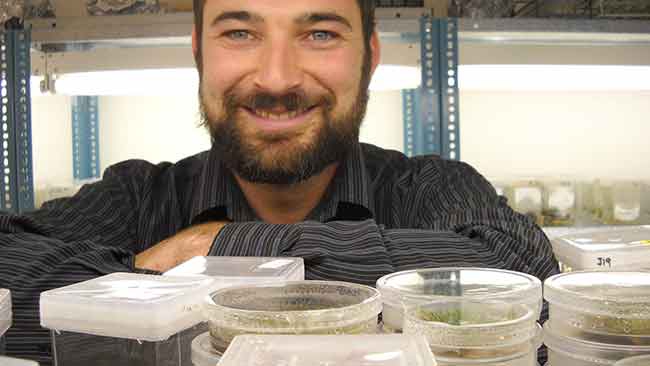 December 2015 — Research is underway at the University of Guelph to speed up how quickly and efficiently a plant can be reproduced.

Dr. Praveen Saxena and Dr. Max Jones of the Gosling Research Institute for Plant Preservation (GRIPP) are leading the work in micro-propagation, which involves developing technology and techniques to provide disease-free plant materials for Canadian horticultural crops like apples and hazelnuts.

“When we micro-propagate a tree, we make a small piece of tissue develop into a shoot, grow roots, then grow it in the greenhouse until it can ultimately be sold as a tree or rootstock,” explains Jones, adding that Ontario apple farmers currently use about one million rootstocks – the base onto which apple trees are grafted – per year, most of which are imported from the United States and Europe.

“The benefit of micro-propagation is rapid multiplication of disease-free plant material. With tissue culture technology, we can get five or six cycles of trees in per year, which is much faster than using traditional methods,” he adds.

They’re experimenting with liquid instead of gel-based tissue culture, which increases the volume of plants that can be produced.

Conventional containers and a type of shelving unit that rocks the containers holding the tissue cultures are expensive – $20 per container and up to $20,000 for a rocker system – and not very user-friendly.

“The containers have a very small opening that contaminate easily and they can’t be put into the dishwasher, so you have to pay someone to scrub everything because it all has to be sterilized,” explains Jones.

VRE Greenhouse Systems of Grassie, Ont., is redesigning the rocker system to be more durable, hold more plants, and be about two thirds less expensive.

Jones and his colleagues are working on revised container prototypes that are fully open, dishwasher compatible, and can accept inserts that let plants be immersed in different levels of growing liquid.

Jones says they’re currently printing sample containers on a 3-D printer in the lab, which is letting them perfect their design at a relatively low cost before moving to producing samples using injection molding technology, which is very expensive when used in prototyping.

Harster Greenhouses in Dundas has begun testing the new equipment and will provide feedback to the GRIPP team on how their prototypes perform in a commercial setting.

“The partnership with industry is important because we want to make sure what we’re developing will meet their needs,” says Jones. “The longterm goal is for this technology to meet our Canadian propagation needs and to give Canadian growers an advantage by producing disease-free plant stock more quickly and efficiently.”

In Canada, micro-propagation work is underway in apples and in hazelnuts, where the focus is on developing trees resistant to Eastern Filbert Blight.

Internationally, the technology has the largest application for banana and sugar cane, but could also be used in plant conservation to help re-establish endangered plant species.

The Gryphon’s LAAIR program is supported through Growing Forward 2, a federal-provincial-territorial initiative.

Start-up funds for the GRIPP micro-propagation work were provided through the Gosling Foundation, an environmental venture fund that identifies and supports strategic start-ups, leadership, collaboration and partnerships.

Lilian Schaer is a communications specialist with AgInnovation Ontario.