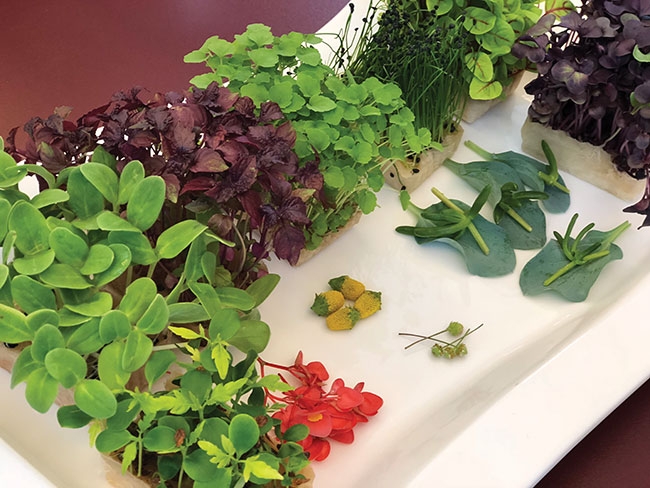 Imagine popping a tiny green seedling into your mouth. You’re pretty sure you know what it’s going to taste like. But then your taste buds are hit with a completely unexpected flavour that reminds you of spicy horseradish.

What you’ve just tried is called Zorri Cress, the young seedling of the Nasturtium, a popular flower mostly grown as an annual with recent interest in Canada as an edible ornamental.

Zorri Cress is part of the greenhouse living micro-vegetable collection called “Architecture Aromatique” that is grown and marketed by Dutch company Koppert Cress. Their innovative approach to both product and marketing has garnered Koppert Cress, and particularly its dynamic CEO Rob Baan, a multitude of awards from the vegetable industry, the culinary world and even the Dutch royal family.

“Agriculture can have an important role in the future and we strongly believe in metropolitan farming where you feed the city from the outskirts,” Rob’s son Stijn explains during a tour of the company’s facilities this past summer.

Their greenhouses are located in the town of Monster, part of the Westland municipality that lies about 10 km southwest of The Hague, the third largest city in the Netherlands with a metropolitan population of more than one million people.

Koppert Cress’ history goes back 30 years, but it wasn’t until Rob Baan bought the company in 2002 that it started down its current path to success in the specialty produce industry, growing from 15 employees to more than 260 today.

Their product, as the name suggests, is cress – but they’re far from the ordinary cress or sprouts most Canadian consumers are used to.

Cresses are small seedlings of plants with unique flavours, fragrance or appearance. Koppert Cress specializes in rare, all-natural varieties of heirloom herbs and vegetables grown from seeds they’ve sourced from around the world. Once grown in their greenhouses, they’re sold wholesale as cut or living microgreens.

“There is a significant difference between sprout and cress,” said Jan van Berkel, communications officer at Koppert Cress. A cress is a seedling and a living young plant that can become a full-sized plant. A sprout is a germinate seed that will not grow to the same maturity, and its warm, damp germination environment can be a breeding ground for harmful organisms. “This is virtually impossible in cress,” he said. Sprouts and cress are differentiated in the EU.

Depending on the plant, a cress crop can take anywhere from five to 28 days to reach market readiness. Once harvested, the plants spend one night in a cooler before the computer controlled system releases them for market. Shelf life is guaranteed for five days after purchase, but some plants can be used for up to 30 days, according to Stijn.

New plants are added to the lineup every year. Last November, for example, saw the launch of Sweet Peeper, as an accent for soups and salads with its yellow leaves, pink shoots and dry, bittersweet flavour. Sweet Lov, a newly germinated corn kernel, was introduced last June and can be used as a garnish, in salads or desserts, or even as a sugar substitute in some dishes.

“We sell to high-end gastronomy. Our product can’t be sold over the phone; we looked at the Michelin guide for chefs and went to visit them with samples,” said Stijn of how the company started to build its markets.

“Cress is still mostly a garnish and not an ingredient, but consumers do pay a bit more attention at Christmas and at Easter,” he said.

To raise awareness, Koppert Cress launched an educational program in 2017 for culinary students in the United Kingdom to teach them how to use microgreens for nutrition and flavour, not just for decoration.

Approximately 20 per cent of the company’s production is sold wholesale in the Netherlands, with two-thirds of the remaining crop marketed in Europe to Scandinavia and western European countries. Russia, Dubai and China are also lucrative markets where Koppert Cress has established a customer base and hopes to grow its footprint in the future.

“Our ambition is to have production in China,” says Stijn.

In North America, the company has a licensed partner in the United States. The high-end microgreens are grown in greenhouses on Long Island and distributed throughout the country through a network of fruit and vegetable wholesalers.

Koppert Cress’ innovative approaches are driven by Rob Baan and his vision to change the way people look at fresh food and health. His career in the horticultural industry prior to owning Koppert Cress took him to over 70 countries around the world, where he became exposed to a wide range of cultures, foods and experiences that have influenced the products his company is bringing to market.

“’Let food be thy medicine and medicine thy food’, this is our philosophy,” said Stijn, adding the company considers food to be the “green pharmacy” that can address many modern health issues.

Their belief in food and health is evident even in Koppert Cress’ own operations; the company provides a daily free lunch for its staff based on fruits and vegetables in the company’s canteen, Rob & Bob Fair Food. It’s part of helping employees meet the Dutch government’s minimum consumption guideline of 250 grams of vegetables per person per day in the Netherlands.

According to Stijn, healthy food has to look good and taste good for people to want to eat it. That, coupled with the unique nature of many of their products, was the reason for the 2006 opening of Koppert Cress’ Cressperience, the company’s in-house meeting facility. Featuring a high-quality test kitchen coupled with a state-of-the-art meeting room, it’s designed to bring horticulture and gastronomy together to exchange ideas and encourage innovation.

Although the company has been recognized with many awards over the years, the one they’re most proud of, according to Stijn, is the King Willem Award for Sustainable Entrepreneurship they received in 2016. It recognizes sustainable innovation annually in small and large Dutch organizations.

Sustainable innovation was certainly the theme behind their newest greenhouse: no fossil fuel is used to heat the greenhouse. In fact, thanks to its energy harvesting capabilities and storage capacity, it even provides energy for the handful of homes across the street from the facility.

“We harvest heat; cold water becomes warm and we store water in the ground so [we] already have heat for the next winter to heat the greenhouse,” Stijn explained. “We also collect heat from the LED lights and from the coolers.”

Although such a system isn’t cheap, the energy savings are sufficient enough that Koppert Cress estimates a return on its investment in only three years.

They’ve also started down a path to become the first business in the Netherlands with a food CO2-neutral company restaurant. Their data analysis showed that the restaurant emitted 43.4 tons of CO2 in 2017. The goal is to reduce that by increasing emphasis on plant-based food products, ensuring that all food purchases are seasonal and local, and planting trees for emissions that can’t be reduced.

Despite the awards and the ongoing innovation, there’s one thing that has so far eluded even innovators like Koppert Cress.

“The Holy Grail is a plant that tastes like chocolate or coffee bean; we haven’t found that yet,” said Stijn.