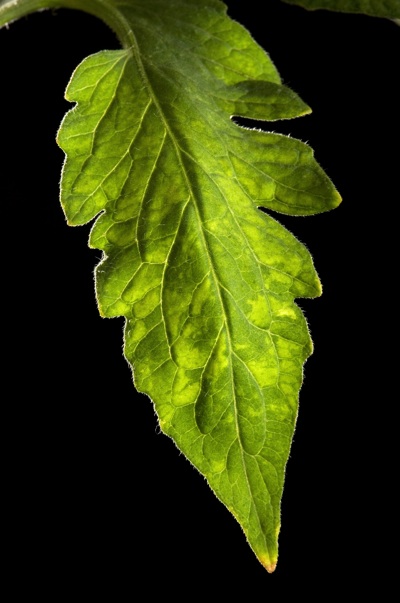 Taming a tomato virus
A tomato that can stand up to attack by a damaging virus in greenhouse
production systems is being developed by an Agricultural Research
Service scientist.

July 20, 2009 – A tomato that can stand up to attack by a damaging virus in greenhouse production systems is being developed by an Agricultural Research Service (ARS) scientist.

ARS plant pathologist Kai-Shu Ling is studying the origins and evolution of Pepino mosaic virus (PepMV), which can damage tomato fruit, stunt growth and leave the plant vulnerable to other infections.

It’s important to find tomatoes that resist the virus in the greenhouse. In 2006, some 652,000 metric tons of greenhouse tomatoes were produced in North America.

Two PepMV strains that infect tomato plants in the United States show a distinct genetic divergence from strains that infect tomato plants in Europe. Ling, who works at the ARS U.S. Vegetable Laboratory in Charleston, South Carolina, studied the genetic makeup of some PepMV strains found in South America, where the virus was first found. He wanted to see if he could tease out the relationships between the PepMV strains found in Europe, South America and the United States.

Ling also identified three varieties of wild tomatoes with a range of genetic resistance to PepMV. He used the most robust of these varieties to generate new progeny that remained symptom-free after they were exposed to PepMV strains found in South America.

Ling will now use this symptom-free variety to see if he can create a tomato plant with genetic resistance to two U.S. PepMV strains. If he succeeds, he will try to develop a tomato type that has a more general resistance to the European strain of PepMV.

Related
Ontario cutting neonics usage by 80 per cent
Out With The Old In With the New?
E-GRO Alert: Powdery mildew on calibrachoa
Virus draws bees to infected plants by changing scent