Features Greenhouses Structures & Equipment
Urban or rural: Where to build a greenhouse

‘You need political will, and it takes time’ – urban greenhouses could benefit from more direct support from governments, experts say. 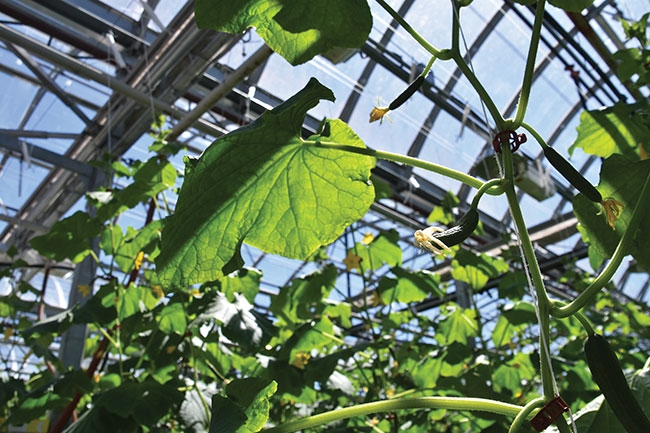 The first two floors of 1400 Rue Antonio Barbeau in Montreal look like they belong on any other low-density commercial building – blocky, covered in mottled brown brick and windows gazing into a beige interior. Just over the lip of its roof, though, peeks long walls made of glass and metal, and inside them, rows of vegetables.

Around a decade ago, the building was a full floor shorter. That was before Lufa Farms – a Montreal-based urban farm and food delivery service – began. It touts itself as the world’s first commercial greenhouse located on a rooftop.

Now, Lufa Farms has three locations spread across Montreal – others are in the Laval and Anjou neighbourhoods – and around 17,000 customers that the company has dubbed ‘Lufavores.’

But back when it first started, urban agriculture, in- or outside of a greenhouse, was something new and untested. Even Lufa Farms – which is now often pointed to as a model of what urban agriculture could be – had a rough time finding a home and traversing the untested waters of starting a farm of its size in a city.

“The biggest thing [was], there was no proof of concept … Everything from finding a suitable building – because it was something that hadn’t been done – to an open building owner to city and zoning. It was very out-of-the-box,” says Lauren Rathmell, Lufa Farms’ co-founder and greenhouse director.

Quebec’s agriculture department, Ministre de l’Agriculture, des Pêcheries et de l’Alimentation (MAPAQ), recently released a report on the state of greenhouse-grown produce in the province. The report noted that only 31 per cent of greenhouse vegetables consumed in Quebec were grown in the province – Rathmell, and other urban agriculture dignitaries, say there’s potential here. The report also notes that the increased demand for organic foods presents Quebec with another area due for growth, and that Ontario has not actively pursued it.

While many of Montreal’s neighbourhoods now vie for a Lufa Farms location, its growing pains are familiar to many sizeable urban agriculture efforts.

Mark Lefsrud has studied different ways of growing food for more than 20 years. He is an associate professor at McGill University’s Macdonald Campus where he is a leader of the Biomass Production Laboratory and worked on the design of the Advanced Plant Habitat on the International Space Station.

Drawing from experience, Lefsrud points out that governments across the world, not just in Quebec, have largely been slow to consider using urban greenhouses as a legitimate food generator.

“It was an unknown – that’s the best way to describe it. They’re used to external, outside-of-the-city food production systems and field conditions. The idea of [using] full, controlled environments wasn’t in their comfort [zone],” he says.

However, the idea of turning unused space in urban centres into something that could aid food security is not an old one. It’s been around for maybe a decade, and agricultural ministries around the world are increasingly eyeing it as a path to feed and employ people – particularly in food deserts.

Lufa Farms’ earlier struggles were largely logistical ones, and the Gouvernement du Québec hasn’t particularly helped or hindered the business’ growth, Rathmell says. While the situation has improved in recent years, there are still challenges that face the industry as a whole.

Cost is a big issue – perhaps more so than other more traditional businesses. Besides the normal run of fees paid by every business, urban agricultural operations above a certain size need to pay to construct a specialized facility. However Rathmell notes that it has become cheaper as acceptance has grown.

Rooftop greenhouses are a bit of a different beast. There’s also the added difficulty of physically moving the building materials onto the roof. And, as much as they encourage people to give a useful purpose to a previously unused space, they come with a dossier of regulations. Functionally, they’re treated like an entirely new floor of a building.

The facility on this new floor needs a sprinkler system, and it needs to be sturdy enough to bear a lot of snow during the winter – [all] in all, it’s a hefty structure, Rathmell says.

Montreal’s Lufa Farms now has three locations and around 17,000 customers.

Many places are not zoned for greenhouses or other agricultural activities like aquaponics, according to Rathmell. Historically, most urban planning in cities rarely took urban agriculture into consideration.

The land itself is also more expensive in urban areas than it is in rural ones. Lefsrud has a rough calculation for this. In rural operations, a plant usually costs between $0.05 and $0.10 to grow, compared to urban greenhouses, where the cost per plant can be as high as $0.45, depending on the season.

Vertical farming somewhat offsets this. Though there is a larger initial price tag to get started, after a while the density of plants – three dimensions as opposed to two – pays for the added costs. Traditionally, the companies that lend credit to agriculture ventures, like Farm Credit Canada and more recently Desjardins, have been wary of providing credit to urban agriculture efforts, but according to Lefsrud they are beginning to catch on.

Some costs can be offset in a city, though. It’s easier to find labour in high population centres, and the ambient warmth lowers the price of heating somewhat – either from the urban heat island effect or, more directly and in the case of rooftop greenhouses, the floors in the building below.

MAPAQ notes that Hydro Québec offers an incentive for growers with supplemental lighting. Designed for greenhouse operators who use all or part of their electricity supplied by Hydro Québec for photosynthetic lighting, this rate option is ideal for customers who can adjust their production to help manage their electricity consumption. According to the report, around 40 per cent of the greenhouse vegetable area in Quebec uses supplemental lighting, a tool that can help extend the growing season and, in turn, help growers take advantage of better market prices.

According to MAPAQ, the department has also established a network to aid urban agriculture across Quebec. As the province only obtains 31 per cent of its greenhouse produce from local sources, the remaining 69 per cent that is imported could potentially be met by local production.

However, according to Olivier Demers-Dubé, founder and CEO of Écosystèmes Alimentaires Urbains (ÉAU), around 80 per cent of greenhouses in Quebec grow for only three out of four seasons every year, limiting the sector’s potential.

“I think we’re producing a very low percentage of what we’re actually eating, even more so in [the] winter. These numbers … that’s year-round,” he says of the information provided by MAPAQ.

Since it began five years ago, ÉAU has helped 10 communities in Quebec design aquaponic systems. This includes an Indigenous community in the north of the province, Whapmagoostui. ÉAU also works with private investors and pre-established food producers looking to attach a fish farm to their greenhouse or vice versa.

According to Demers-Dubé, there are facets of starting an urban greenhouse that are becoming easier, but at a basic level, it’s still more difficult to set up a sizeable facility in the city than it is elsewhere. Further, he says, though many governments offer programs and funding that coincide with urban agriculture, there are still precious few initiatives that specifically seek to aid those operations.

“You need political will, and it takes time,” he says.

Going forward, one of the biggest challenges to urban agriculture comes in a fairly innocuous form. Now that Canada has legalized recreational cannabis, most of the thought and attention paid to greenhouses in general, by both businesses and governments, is dedicated to this relatively new industry.

“Right now, one of our biggest challenges is cannabis taking all the air out of the room,” Lefsrud says.