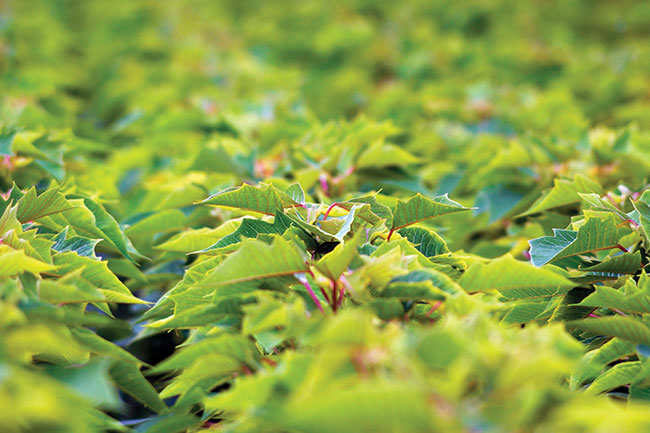 Incoming cuttings of poinsettias and mums face a number of stressors at this time of year. © RobertoVaca / iStock / Getty Images Plus

Transplant is a stressful time for poinsettia and mum cuttings arriving in the summer. Not only are they adjusting to a new environment, but they’re also battling the heat, potential watering issues, and opportunistic pests and diseases.

When unrooted cuttings first arrive, the soil is only an anchor, says Guillermo Maldonado, grower advisor for Berger. Hydration of the cutting isn’t dependent on soil moisture just yet.

He recommends keeping relative humidity above 90 per cent, with enough mist to keep the cuttings hydrated but without oversaturating the soil. A medium level of moisture will allow enough oxygen and airspace for rooting to start.

“If you use excessive amounts of water, there could be suffocation at the early stages. The plant has very little ability to overcome stress since it’s just establishing.”

He also recommends avoiding any extremes. “Drastic changes in climate, excessive amounts of water or extreme swings in dry down, will always impact them in a negative way.”

The average ratio is a half gallon (1.9 L) of fluid to one cubic foot (28 L) of mix for filling containers. After transplant, he recommends one last pass as growers start to see drips from the soil, close to saturation, before they move to the growing side. As the plants start rooting and growing, they can take higher volumes of water, followed by a slight reduction in water and fertilizer towards finishing. Sensors, weighing methods and other automated means can be used to achieve more uniform moisture across the crop.

“The way you manage watering frequency or irrigation will be very tightly related to the type of mix you are using,” he says. “Determine your mix first, then determine your watering schedule.”

When cultivating from unrooted cuttings, Maldonado generally advises on a light mix containing 70 to 80 per cent peat moss to allow for higher porosity. “Higher porosity mixes are more standard for northern climates for both poinsettia and mum production,” he says. “Plants grown in northern climates tend to be subjected to more dark, humid periods. The higher porosity helps ensure a good rooting environment.” In comparison, more southern and drier areas in the U.S. will want options that hold onto water for longer periods of time. 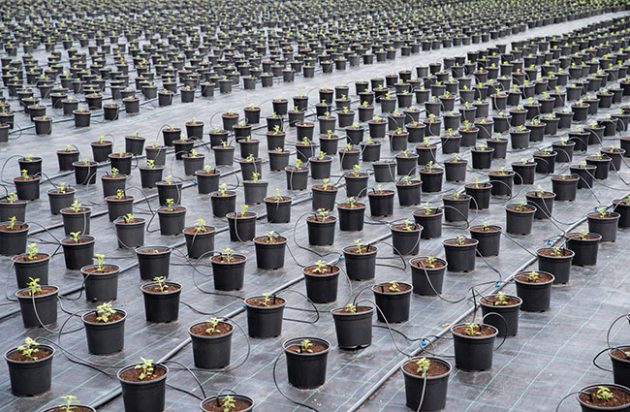 Watering and water quality are critical to a healthy rootzone. Too much could create an enticing environment for fungus gnats. Photo credit: © DEYANAROBOVA / ISTOCK / GETTY IMAGES PLUS

Overwatering doesn’t just impact rooting. It opens the door to pests and diseases.

“Too much water creates ideal conditions in the upper layers of the soil for fungus gnats.” To counter this, he’s seen Ontario floriculture growers allow the top layer to dry down, creating conditions unfavourable for fungus gnat larvae, which in turn helps eliminate many of the issues associated with this pest.

Though they feed primarily on microbes in the growing media, fungus gnats may feast on young, transplanted material and attack the early rooting stages. Poinsettia cuttings can be decimated in extreme cases, but even small damages provide entry points for disease.

As he points out, diseases like pythium and fusarium are usually less severe pathogens. However, stressed plants are more susceptible to infection, and feeding wounds caused by fungus gnats and other forms of mechanical damage provide an easy route for these pathogens to enter and infect the plants. Underwatering can also lead to more fragile roots, which are prone to damage.

As diseases are often transmitted by water, it’s important to use a clean supply and irrigation lines. “If growers are pulling from a pond, water quality is the worst in the summer because water levels have gone down [and] temperatures are raised.” It’s one of the most common sources of pythium and phytophthora.

“There are microbes that like to live inside pipes and form a biofilm. Biofilms may not be directly harmful, but they serve as hiding places for a lot of plant disease organisms,” he says.

Because adult fungus gnats can passively spread disease in a greenhouse crop, it’s important to take steps to control the larval stages. Nematodes are an ideal solution – a happy coincidence as the same nematodes are also used to control Western flower thrips on mums, says Brownbridge. 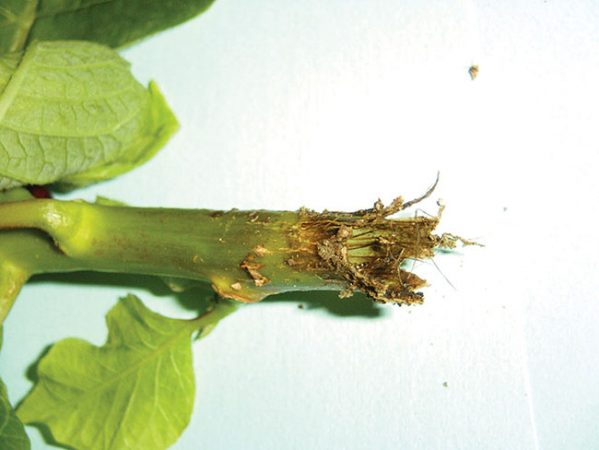 Biological fungicides and inoculants can be used preventatively at propagation, not only for disease prevention but to ensure better root health overall.

By colonizing the plant’s roots, these beneficial microbes help protect against pathogens, says Brownbridge. Some strains of Trichoderma promote the development of roots, particularly root hairs, which enhance access to and uptake of water and nutrients. “Trichoderma also help solubilize plant nutrients from the soils,” improving the bioavailability of these nutrients to the plant.

Most microbial biofungicides currently on the market are based on various strains of Trichoderma, Bacillus or Streptomyces. Each has its own unique characteristics, but generally, the active microorganisms are capable of bringing similar benefits to supporting healthy root development, says Brownbridge.

“Get it on while plants are rooting. Make sure it’s reapplied or present in the growing medium when the now rooted cuttings are transplanted [so] they’re there again to colonize the roots that develop.” The microbes also help plants tolerate transplant stress and better cope with environmental stresses brought on by the summer heat.

Of the Bacillus products, most include not only the Bacillus spores themselves, but the metabolites produced during their fermentation which have anti-microbial activity. “These metabolites work quickly to suppress diseases in the soil and the bacteria will slowly colonize plant roots. Trichoderma strains typically grow much faster and more effectively on the roots than Bacillus strains,” he says, based on his observations.

Gaining a better idea of how these different microbials work together may be grounds for future development. “Because there are subtle differences in what they can do [and] what they can bring to the plant, how can we capitalize on the benefits brought by both?”

Sometimes a chemical fungicide is needed, but it’s best planned beforehand. “It’s a matter of looking at the program holistically, looking at which chemistries can be used with which biological agents…. It can go a long way to alleviating issues,” he says.

It’s important to leave a section of the crop untreated for comparison. Biofungicides and biostimulants help the plant better tolerate biological and environmental stress in part because they improve the plant’s general well-being, says Brownbridge. This way, the plant can bounce back much faster when conditions are more favourable. It’s a benefit that isn’t clearly visible unless there’s a control. 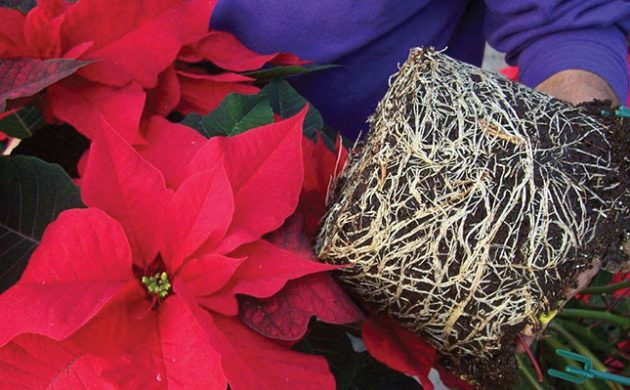 A preventative treatment with beneficial microbes can lead to healthy roots. Here, a poinsettia has been treated with RootShield Plus, from early propagation when cuttings were rooted, then re-applied every six to eight weeks. Photo credit: BioWorks Inc.

Nutrition is a key step to starting quality poinsettias and potted mums.

Once crops have been transplanted, growers should keep a close eye on nitrogen, particularly the percentage of nitrogen coming from nitrate versus ammonium sources.

To ensure bract quality and good leaf expansion, Maldonado says the nitrogen from ammonium sources should not exceed 30 per cent of the total nitrogen fed. It can go lower, but no higher. “After that, close to flowering, you want to switch that ratio to almost no ammonium and concentrate on nitrate, so that you end up with a nice, compact plant.”

Phosphorous is another nutrient that can damage or diminish the quality of these crops, particularly if it’s supplied in excess. “Phosphorous will tend to make the plant stretch more than necessary and have elongation that is not ideal,” says Maldonado. While deficiency is also a concern, the most damage occurs when levels exceed 30 ppm in the mix.

From his experience, one of the main culprits of quality issues is the ratio of calcium to magnesium. Generally, the goal is to maintain a ratio of 2:1, which equates to “about 100 to 180 ppm of calcium and 25 to 50 ppm of magnesium.”

Since calcium is an immobile element within the plant, uptake into developing plant tissue depends on transpiration, which is dictated by the greenhouse climate. “If the climate isn’t active, very little calcium will reach the tip of the plant, and no matter if you add it or have it in your mix, your plant won’t be able to take it up,” says Maldonado.

For both poinsettia and potted mums, general pH targets should land between 5.8 to 6.2. During the rooting phase or shortly after rooting starts, EC should measure between 0.7 to 1.0, or 1.2 at the highest, using a saturated media extract (SME) test. During the flowering phases, EC should clock in between 1.5 to 2.5.

While it’s well-documented that plants have different nutritional needs as they mature, “what’s changing is how microbial biostimulants can change that equation,” says Brownbridge. These organisms can make the nutrients more readily available as a result of conversion through microbial activity, lowering the volume of fertilizer inputs needed.

More work is being done to understand how these new inputs promote plant health. For example, there’s evidence to suggest that an amino acid-based feed, applied by drench or foliar spray, enhances carbohydrate production in the plants and promotes uptake of key nutrients like calcium. “That means they’ve got more energy to put into things like root development and the resources they need to build healthy cell walls. That helps young plants to grow, resist infection and tolerate environmental stresses,” he says.

There’s much to take note of, but as Brownbridge emphasizes, it’s important to take a holistic view of plant production. “What does the whole plant need? It’s not just one piece at a time ….because they’re all connected.” 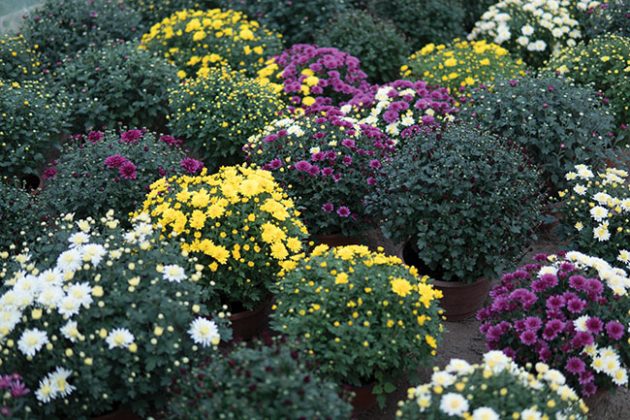 Ensuring good rootzone management at this point helps set up the plants for success at finish. © michal812 / iStock / Getty Images Plus

The case for wood fibre

Mixes with up to 25 per cent wood fibre have been used successfully at several sites in North America for poinsettias and potted mums. Compared to a peat-perlite mix, Berger’s studies have shown that mixes with wood fibre have less drainage but a greater ability to hold water while still allowing for adequate airspace.

There have been concerns that wood fibre can tie up nitrogen, but the supplier’s research suggests that any effect is made negligible in mixes containing less than 30 per cent wood fibre.

Related
Garden mums: To produce and protect
Healthy roots from start to finish
How much calcium and magnesium do chrysanthemums need?
What’s next for IPM? New biological solutions and more