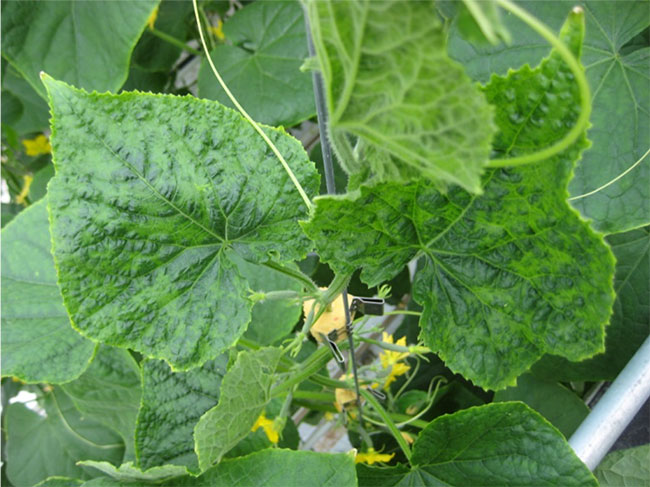 As its name suggests, the cucumber green mottle mosaic virus leads to a mottling, blistering and distortion of the plant, including its leaves. All images provided by: O. Ellouz

Mechanical transmission is responsible for the quick spread of the virus throughout the commercial greenhouse environment. This may occur in the handling of plants, leaf-to-leaf contact, plant wounds made with cutting tools, farm equipment, chewing insects such as the cucumber leaf beetle, and pollinators such as honeybees.

A few infected plants in a cucumber greenhouse can lead to infection of the entire crop, causing losses in cucumber production ranging from five per cent to 20 per cent at the end of the cropping cycle. High infection in the crop may force growers to terminate production in the early stages and hence reduce the overall profitability of their operations. In addition, infection may not be limited to the current crop but may also affect subsequent crops due to the long-term persistence of the virus on contaminated crop residues, greenhouse hard surfaces and soil or soil-less greenhouse substrates.

Greenhouse sanitization is the cornerstone of an effective integrated pest management (IPM) and biosecurity program. It encompasses processes that clean and decontaminate surfaces that may become infested with pathogens, insects, and mites. An effective sanitization program results in the reduction or elimination of active and dormant stages of pathogens and pests, as well as disruption of their life cycles. Sanitation protocols also represent low cost solutions to pest problems and reduction of the costlier pesticides.

To this end, one goal of the project was to evaluate the effectiveness of the sanitization and disinfection protocols against CGMMV in a commercial greenhouse and to identify commonly infested surfaces. 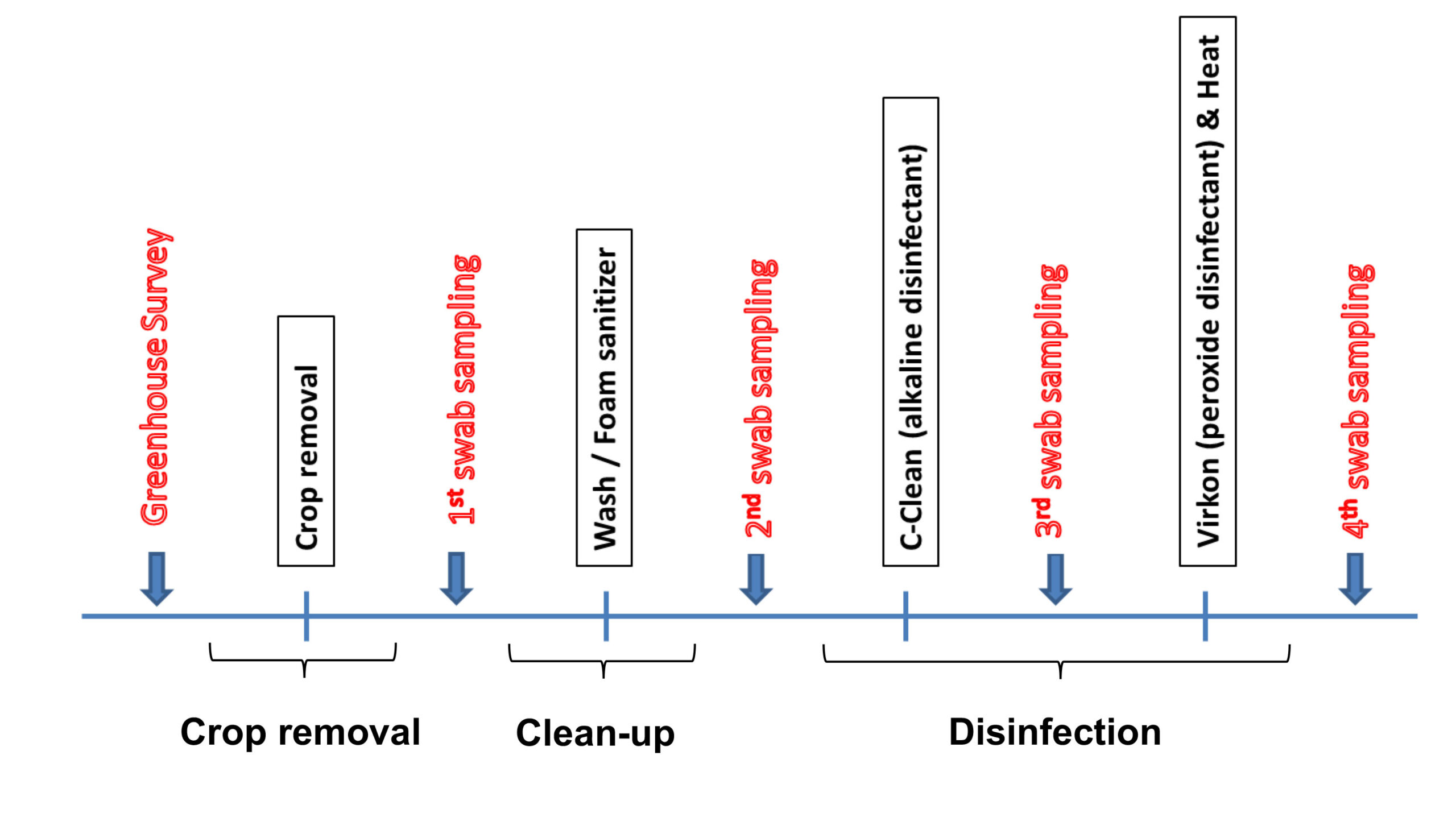 Figure 1.
These were the sampling steps used to evaluate the effectiveness of different sanitization procedures in eliminating cucumber green mottle mosaic virus in a commercial greenhouse setting.

An extensive environmental sampling program for CGMMV was implemented on hard surfaces before and after each sanitization step utilized by the grower. The Solar-Cult Pre-moistened Sampling Cellulose Sponge Kit was used for sample (swabs) collection from the potentially infested greenhouse surfaces and structures. Samples were collected after each step of the sanitization program: crop removal, cleaning with pressure washing and alkaline sanitizer MS TopFoam, application of alkaline disinfectant C-Clean, as well as the use of peroxide disinfectant Virkon and heating the greenhouse to temperatures over 65 °C (Fig. 1). Samples were analyzed for CGMMV using the Enzyme-Linked Immunosorbent Assay (ELISA).

Following crop removal, the majority of surfaces sampled tested positive for CGMMV, with the exception of interior walls, perimeter heating pipes, wall-shade curtains and crop support wires. Surfaces directly in contact with plants were the most heavily infested areas, with tray tops and tray gutters having the highest levels of CGMMV.

Cleaning using MS TopFoam and pressure washing was sufficient to eliminate CGMMV on almost all infested surfaces, except for porous and uneven materials such as tray gutters, cement alleyways and floor mats. On average, this step reduced the levels of CGMMV infection by 85 per cent. Infection levels were further reduced by 99 per cent when surfaces were subjected to pressure washing and MS TopFoam twice.

Two sanitization steps by MS TopFoam and C-Clean were necessary to eliminate CGMMV from tray gutters and floor mats. On average, this step further reduced the levels of CGMMV infection by another 10 per cent. Cement alleyways were the most difficult surfaces to disinfect and all cleaning/disinfecting steps, including the use of Virkon and heat, were needed to eliminate CGMMV infectivity.

Note that the most critical step in effective sanitization was the removal of organic matter, the primary source of disease-causing plant pathogens. This step should be carried out in advance of disinfection since some disinfectants can be inactivated by direct contact with organic matter.

A second goal of the project was to screen cucumber varieties for their potential resistance to CGMMV and evaluate the effects of infection on their productivity. 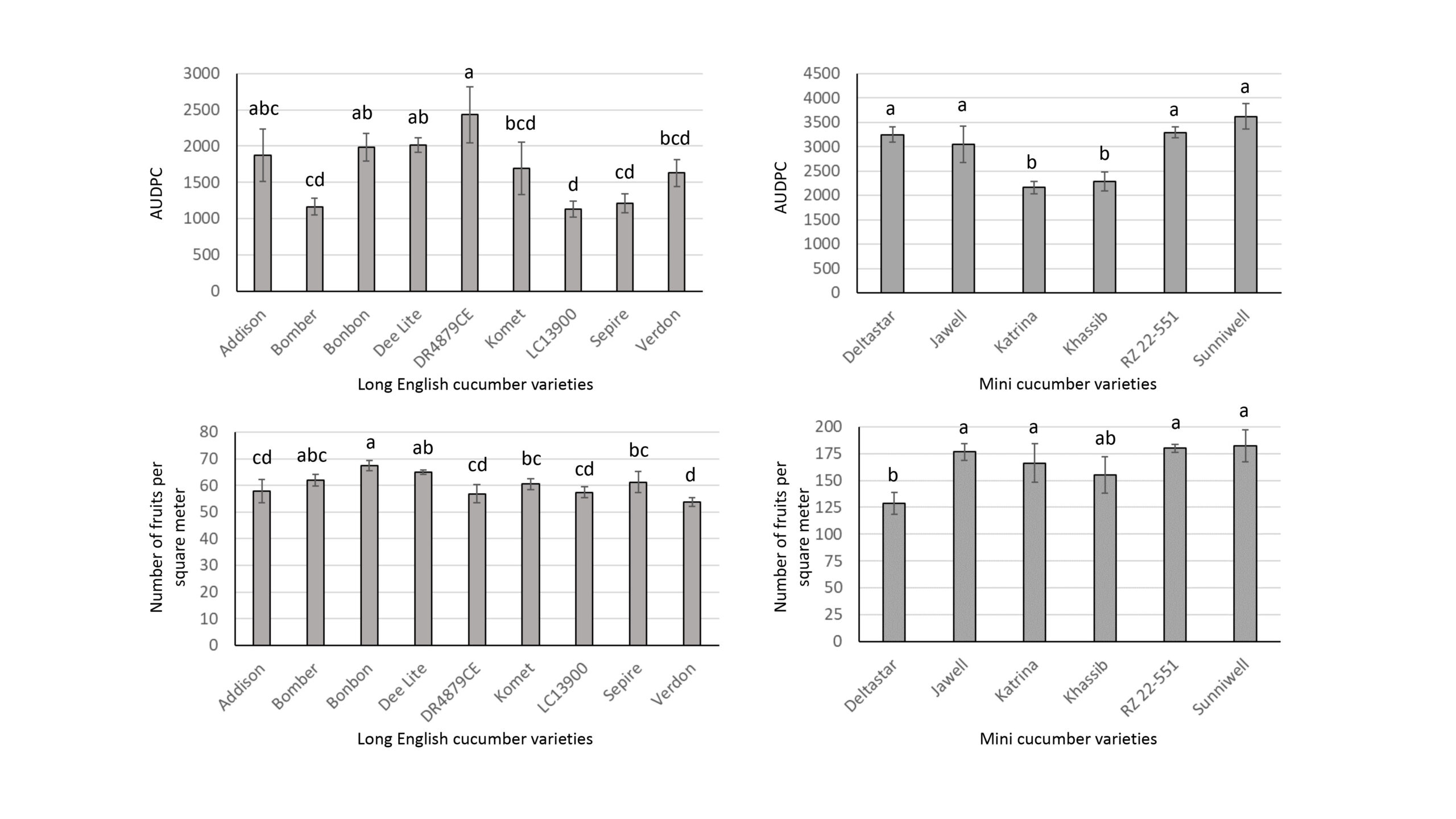 Figure 2.
The top two graphs quantify disease resistance using the curve of disease intensity over time (AUDPC) – the lower the value, the more resistant the variety. The bottom two graphs quantify cucumber yield in plants infected by CGMMV. Note: DR4879CE was retired by the supplier from its portfolio.

It is especially important to point out that some of the screened cultivars could still maintain meaningful productivity despite virus infection. Among the six Mini varieties, ‘Jawell’, ‘RZ 22-551’ and ‘Sunniwell’ were the most tolerant to CGMMV. These varieties showed high CGMMV infection levels, however, they also had the highest fruit yield. Among the nine varieties of Long English screened for resistance to CGMMV, ‘Bonbon’ was tolerant. This variety had high CGMMV infection levels without compromising yield, which was the highest among all the varieties tested.

The use of high-yielding Mini and Long English cucumber varieties with delayed CGMMV spread, as demonstrated in this trial, is recommended for cultivation in the greenhouses assuming that this would reduce the incidence and spread of CGMMV infection and could reduce economic losses to cucumber growers. However, growers should use efficient sanitization programs between crops, since repeated cultivation of partially resistant cultivars may increase the level of CGMMV particles on various hard surfaces within the greenhouse and render even partial resistance ineffective. Hence there is an urgent need for highly resistant cultivars that not only perform well amid CGMMV infection but also restrict the movement of and replication of the virus.

For more information, watch the accompanying webinar at greenhousecanada.com/webinars and/or refer to the paper below:

Oualid (Walid) Ellouz, PhD, is a research scientist in plant pathology at Agriculture and Agri-Food Canada and is based in Vineland, Ont. He can be reached at oualid.ellouz@agr.gc.ca

Related
Crop clean out: Tips and tricks
A&L Biological moves first commercial products into registration phase
How to monitor for greenhouse pests
It’s all about the delivery