For a while this past winter it looked as though we would be putting in
our gardens by February! Weather logs confirm that the 15 warmest years
on record since 1867 have all happened since 1980 and statistically,
that is no coincidence. 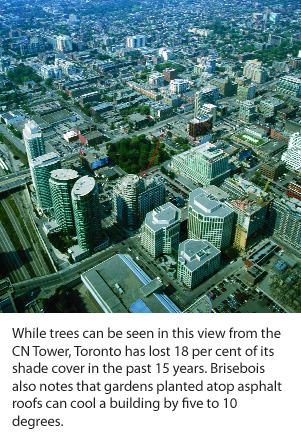 For a while this past winter it looked as though we would be putting in our gardens by February! Weather logs confirm that the 15 warmest years on record since 1867 have all happened since 1980 and statistically, that is no coincidence. Climate change is considered by many scientists to be the most serious threat facing the world today, more serious than any terrorist activity or economic downturn. The sheer urgency of environmental issues makes it one of the biggest business trends to ever touch every industry.

Given that the gardening industry is in the business of making the planet greener, it will likely be one of those on the leading edge of the “green revolution.” It is not easy being green but there are strong indications that our government is making sustainability a priority and this will most likely translate into new legislation that will change the way we do business.

Former vice-president Al Gore has earned the nickname “The Goracle” for his documentary An Inconvenient Truth. The movie, a critical and box office hit, warns that sustainability must be a priority for every country immediately, and the film has been credited with swaying public opinion in favour of changing our ways.

We know that plastic containers, product tags and other non-biodegradable items sit and sit. What we may not realize is that when garbage does decompose, moisture filters through it producing a toxic liquid known as leachate. Decomposing garbage also produces greenhouse gases that trap heat and cause global warming.  Landfill sites account for about 38 per cent of Canada’s total methane emissions and methane is 20 times more potent as a greenhouse gas than carbon dioxide.
Hurricane Katrina is believed to be a byproduct of global warming. Massachusetts Institute of Technology scientist Kerry Emanuel reported that there has been a 50 per cent increase in duration and intensity of storms since the 1970s. So, with all of this compelling evidence, where should the garden centre focus its efforts to make environmental sustainability a key business strategy? Here are a few areas worth considering.

Water
Should riverbeds and lakes dry up, water will become a precious commodity, one worth fighting over. If countries are willing to go to war over oil to fill their SUVs, it is not hard to imagine the conflict that could be mustered over life-giving water.

This prospect should give us pause for reflection since Canada is a ‘water-rich’ nation. We are the stewards of 9 per cent of the world’s renewable fresh water supply.

Garden centres would be wise to carry hoses, sprinklers and other items designed to conserve water. Rain barrels will become very popular with homeowners as a means of collecting and recycling water. Many newspaper articles are encouraging people to use native plants that are better suited to our climate and therefore require less water and fertilizers.

Biodegradable Packaging
Garden centres will need to rethink all of those plastic pots and product information sticks that tell consumers how to care for the plant. Consider implementing a “pot return” program, or try using biodegradable pots. Another option is to post product information on your web site instead of on plastic sticks.

Composting
According to Environment Canada, about one-third of Canada’s waste is paper and paperboard. Another one-third is yard and kitchen waste. Make sure you carry compost bins to allow consumers to take their kitchen scraps and grass clippings and turn them into rich compost. As municipalities continue to crack down on the amount of garbage we’re allowed to put out at the curb, dealing with it at the source will become a front-burner issue.

Trees
Given that its tree canopy has shrunk by 18 per cent since 1992, the city of Toronto has a mandate to increase its tree canopy 30 per cent by 2010. Make sure your operation offers a robust selection of trees designed to help soak rainwater (preventing run-off) and keep buildings cool in summer (decreasing demand for air conditioning).

Provide lots of information to help consumers choose the best foliage. Seminars on creating green spaces and how trees help the environment will probably be well attended.

Fertilizers and Pesticides
Many municipalities have already banned cosmetic pesticide use. As consumers move from being “forced” to make changes to “wanting” to make changes, you will probably field more queries about environmentally friendly lawn care solutions.

Unique Gardens
Look for an increased interest in vegetable gardening both in single-family dwellings and as a shared allotment garden. Growing our own food supply means that less of it will have to be transported which could save on gas emissions.

Roof top gardens will become more popular. They are reported to be five to 10 degrees cooler than adjoining asphalt roofs, and the city of Chicago is actively promoting this solution.
There’s no bigger trend right now than the environment. Author and futurist James Canton, PhD, in his new book The Extreme Future, identifies climate change as one of the Top 10 trends upon us. Canton suggests that the “Clean Tech” market will grow to $150 billion US by 2015 from its current level of $10 billion. Clean Tech is about keeping the planet clean, profitably. As the author states, “I always forecasted that once business could figure out how to make money from saving the environment, the future would be safe.”

While federal governments wrestle over whether to sign the Kyoto Accord or not, the real action seems to be in the municipalities. Many mayors in North America have realized that if each city makes its corner of the world into a greener place, the cumulative effect could be very powerful. Mayor David Miller of Toronto wants his city to be the green leader in North America. They are smart to understand that a sustainable strategy is good for their local economies as well as the world.

Identify one product or process that could be made more environmentally friendly. Consider signage next to your displays to identify those products that have recyclable or biodegradable packaging. Start with one change and then keep going. It is likely that very soon governments and industry will make Clean Tech a priority and this is good news for our businesses. As the keepers of all things green, the gardening industry stands to be a key player in this new market.