It’s often said that location, location, location is the key to a successful business, and this is true for Greenland Garden Centre, located in Sherwood Park, Alberta. Although the business was begun over forty years ago by John and Lennie Chichak, it wasn’t until the next generation decided to build the new Greenland in a new location in the spring of 1991, that the business grew in leaps and bound as a destination garden centre. 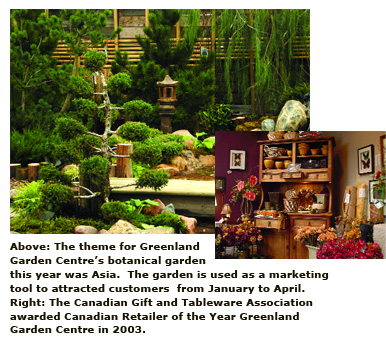 Greenland Garden Centre Striving to be Unique in a Competitive Market

It’s often said that location, location, location is the key to a successful business, and this is true for Greenland Garden Centre, located in Sherwood Park, Alberta. Although the business was begun over forty years ago by John and Lennie Chichak, it wasn’t until the next generation decided to build the new Greenland in a new location in the spring of 1991, that the business grew in leaps and bound as a destination garden centre.

“We went from being off the road to a main highway location,” say Deborah Sirman, co-owner of Greenland Garden Centre. “Sherwood park is one of the fastest growing communities in Canada right now. It’s amazing with the amount of houses going up. It makes us smile every time a basement is dug. My brothers Wayne and Tim, and my husband Rod and I, are now the owners of the business, but my mom and dad still have their nose in here every single day,” says Sirman.


Greenland has one main garden centre competitor, but Sirman believes there is enough business for all of the small independents to do well if they strive to be unique.

“In our area we have a very high density of greenhouses; it’s unusually high per capita, but we all work very well together.”

The other competitors that Greenland is contending with are RONA, Home Depot, and Costco, which have recently been built directly across the street.

“I’ve never been threatened by them,” Sirman says. “I don’t think they know a damn thing about plants. In reality, you know people buy plants there and if they  didn’t, the odds of them coming here would be a lot higher.” Sirman believes that the box store customers will eventually come to Greenland because they will need quality and information.

Greenland strives to be unique and puts a twist on the business to stay ahead of the competitors.

“We’re not just a garden centre for plants,” Sirman says. “We are considered to be a year round destination. For example, in January when everyone says they’re aren’t any customers, we develop a botanical garden in our large greenhouse. During the third week of January, we offer the Eager Gardeners Open House, where we present our new garden, have registration for all our garden classes, and we have sales reps come to show off new products. So in the middle of January our parking lot is full of people.” 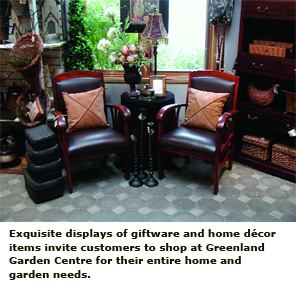 The botanical garden was created to attract people year-round. Greenland used to spend a great deal of time and money at trade shows, where they won numerous awards, but after revising their strategy, they realized it would be far more beneficial if they spent that money on their own trade show within their store. Hence, the permanent garden was created, which attracts people to the garden centre for four months during the off-season. Tours are offered through the garden, and for customers’ convenience, everything is labelled. Once the spring finally arrives after a long Alberta winter, the garden becomes a tool to present merchandise such as giftware and home décor items.

Greenland has evolved in leaps and bounds over the years, and Sirman believes that advertising has played a crucial role in their continued success.

“I find advertising to be my biggest challenge,” says Sirman. “I did hire a creative design consultant, who does all my identity and makes sure my ads are the same. But she also helps by purchasing my advertising. I find that she can look at my customer base more accurately then I can and she can get better value for my advertising dollar. She has definitely opened doors that I wouldn’t have gotten into myself. It took a while to find the perfect person, but we’ve grown together,” Sirman says.

The most recent advertising find was a gardening spot on television, every Thursday.

“It’s just a short spot, but it’s a major channel in Alberta. We had to pay for the advertising, but they’re doing a lot of promo for it – Growing with Greenland Every Thursday. I could never have done that on my own.” Sirman also does a radio show every Sunday morning, which she’s done for the past five years. “It’s one of the best marketing tools we’ve ever done. My advice to anyone else is that if you think it’s too expensive to higher someone to help you choose and negotiate your advertising, that’s not the case. If they’re good, they will get you so much added value, you’ll be saving money in the end,” Sirman says.

Another aspect of a successful business is how you treat your staff, and in turn, how they treat your customers.

“The way I look at it is that my staff is my mirror to the public, if they don’t emulate our goals, then we’re not going to be successful. I have to inject them with the enthusiasm that I have in my heart,” Sirman says. “We do a lot of staff training, which I gather a lot of places don’t do. We do four three-hour training sessions with our new and existing staff, and we have a five-hour training session, which is all about spring. We have weekly newsletters to the staff, to make sure they know what’s going on. We do have trouble having meetings with everyone, but our departments are encouraged to have their own meetings. It’s a challenge but that way they get to know us, and the company. I would be afraid going into the spring without doing them. There are so many new things to learn and after 25 years, I still learn something new every day. I think our staff deserve it and I think our customers deserve it even more.”

In the end, Greenland Garden Centre knows that their success is dependant on numerous factors, but they certainly seem to be on the right track by offering their customers a year round destination filled with everything a garden enthusiast desires.

“We’re just lucky that as owners, we all have our individual strengths and we manage our individual areas, so we don’t have to step on each others toes. We are also very lucky that we have strong management in place who emulate our goals and in the end it’s the staff that are key. I don’t ever take them for granted. We certainly wouldn’t be where we are today without them – they’re our lifeline,” Sirman says. “Our philosophy at Greenland is that there is never a minute of complacency. I’m always striving to do it better and that’s what’s making us do it better. I think that’s what has made Greenland grow, and luckily we all think the same way.”


Related
Inside View: September 2007
IT’S SHOW TIME
MANAGING DURING PERIODS OF UNCERTAINTY
From the Editor: Role of research in industry’s growth