Over the past hundred years, Canada has seen an incredible growth in population, urban development, and technology. Our landscape has changed from rolling fields to concrete sidewalks and streets weaving their way through large cities. 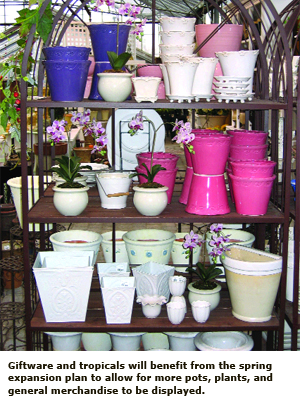 Plant World Limited
A Constant Fixture in a Changing World

Over the past hundred years, Canada has seen an incredible growth in population, urban development, and technology. Our landscape has changed from rolling fields to concrete sidewalks and streets weaving their way through large cities. It’s a rare occurrence for a business to still inhabit the same plot of land, but Plant World Limited in Etobicoke, Ontario, has watched the city grow around them and have succeeded in remaining a constant fixture in a changing world.

“I’m the sixth generation to work this land,” says Paul Reeves, owner of Plant World.  “My family bought it in 1889. Obviously we weren’t a retail garden centre back then – we started as produce growers, and then evolved into floriculture crops. My grandfather opened the first cash register for the retail business in 1963, and that was the birth of our garden centre.”

Plant World has come a long way since its humble beginnings. Reeves and his brother Kurt run the day-to-day operations of the business. Their parents Frank and Deloris are semi-retired now, but they still pitch in during the spring rush.

“Two seasons ago, the original farmhouse was still on our parking lot, and my parents were still living there. We tore it down to expand the parking lot,” Reeves says. Surveys are enforced by the city any time Plant World wants to make changes because they are still on a septic bed and leeway waterlines.

“It’s been a big project with moving buildings and putting up new ones, as well as some interior projects. It’s been a busy two years.” Expanding the parking lot from 80 spaces to 180 has made a huge difference to Plant World, which Reeves saw as the number one factor limiting their growth. The Reeves family also recently finalized the purchase of an acre of land from the city, which is directly beside their 4-acre property.  Plans to expand the nursery in the spring are well under way. 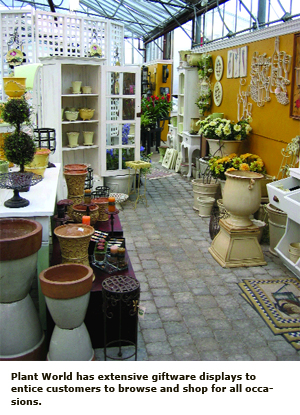 Plant World has recently found itself in a fortunate situation when it comes to major competition. Sheridan recently bought out Weal & Cullen Nurseries, and the location closest to Plant World was closed. The nearby White Rose has also disappeared, and Sheridan sold their nearest location.

“At the moment I’m in a very good position,” Reeves says.  “I consider Sheridan and Humber to be our true garden centre competitors, but the ones that constantly chip away at us are the box stores and grocery stores. I’m more concerned with Loblaws than I am with Home Depot.” Loblaws has their flowering plants displayed behind the checkout. It becomes a convenience factor for people getting their groceries, and often the plants are purchased on impulse.

“At this time of year we lose some traffic. In January and February when the weather is lousy, people don’t like to drive everywhere.”

Christmas on the other hand, has always been a prosperous holiday at Plant World. Reeves says you have to make the commitment to push Christmas, but it’s well worth it.

“It’s definitely growing,” Reeves says. “The live end of Christmas has been very hot, the decorating greens, the urn inserts, that kind of thing. A lot of Christmas trees too – we’re selling up to 2400 trees.” During the weeks leading up to the Christmas season, Plant World’s existing giftware area expands to over 10,000 sq. ft. Linda Brown is responsible for doing all the giftware displays.

“Linda has been with us for 20 years now. She does all our gift, Christmas, pottery, and container buying. She’s responsible for most of the merchandising of those products as well. The Christmas displays took her, plus five other employees, from September 1 to November 1 to have it up and running,” Reeves says. Linda’s work has not gone unnoticed. Plant World recently won the CGTA Best Specialty/Niche Retailer 2004.

“We do all the designing in house. We do a consultation and our designer will meet with customers and get the measurements. We then do a computerized drawing. If the customers are interested in the installation, we sub-contract out that out to a company we work very closely with.”

Plant World has been doing its own signage in-house for 15 to 20 years now. They have a database of about 4500 plants, which includes pictures and information. Reeves says it’s an excellent opportunity to keep staff busy during the winter months.

“We look at the new varieties that are on order for this year, and try to develop all the appropriate signs for our area. We do a lot of research and we download pictures,” Reeves says. By doing the signage in-house, Plant World is able to print a new sign, laminate it, and put in on display quickly.


Related
IN CAIS YOU WERE WONDERING (PART TWO)
HOW BEST TO HANDLE AGRICULTURAL WASTE PLASTICS?
It’s February 2008 – do you know what your financial results are?
Pricing pressures: are you keeping up?