Features Business Research
STUDENT RESEARCH PROJECTS AT THE U OF GUELPH

The exercise provides students with some “hands-on” growing as well as some basic research experience.

Each year, some students in the undergraduate agriculture/horticulture degree program take a course in greenhouse management. In this third/fourth year course, they learn about the effects of environmental factors on plant growth and development. The students conduct a research project where they can study a particular problem related to greenhouse production.

I provide the students with a number of potential projects, which I have picked up during the year (often grower suggestions), but the students are free to choose the topic. The projects are not considered to be conclusive as time does not allow them to do an extensive project, and some treatments are compromised due to time and space limitations. And sometimes mistakes are made as well.

The exercise provides the students with some “hands-on” growing as well as some basic research experience, and hopefully the exposure to greenhouse production provides some incentives. Projects are usually done by two students working together. Below are short summaries of what the students accomplished during the winter semester of 2006. 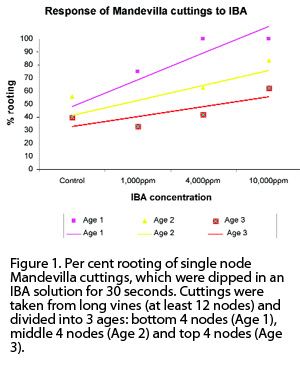 By Greg Boyd and Thomas Tregunno

Research was conducted to evaluate the use of liquid solutions of indole-3-butyric acid (IBA) at 0, 1,000, 4,000, and 10,000 ppm IBA, and two methods of application (basal dip and complete submersion) of Mandevilla cuttings of different ages along the vine. The results showed that cuttings of different age responded linearly to IBA concentration and only mature cuttings treated with 10,000 ppm IBA achieved a rooting percentage greater then 95 per cent (Figure 1). There was no evidence that submerging cuttings improved rooting over dipping cuttings, although roots were initiated higher up the stem.

High nitrate levels in the tissue of leafy vegetables are of concern for human health. The objective of our study was to compare organic with conventional hydroponic production of lettuce and spinach in order to determine whether organic production would reduce the nitrate levels.

Results were inconclusive as it became apparent that NFT was incompatible with the organic fertilizer at any concentration. The fertilizer appeared to be concentrating in the rockwool substrate, causing plant death within one week from placing young seedlings into the NFT system. As a consequence, nitrate concentration could not be determined in the tissue. 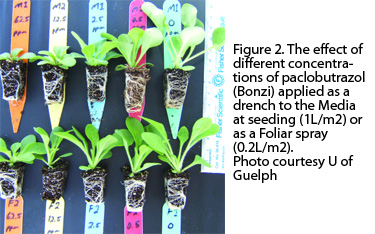 By Allan Sutherland and Paul Vos

Pre-emergence drenches were applied at seeding to the plug medium substrate. Post-emergence sprays were applied 31 days after seeding. Size of plants were evaluated 47 days after seeding. Germination in trays that received media drenches were significantly reduced (77 to 55 per cent) compared to the average of control and foliar applications (90 per cent). Plant height and length of leaves decreased linearly with an increasing concentration of paclobutrazol, regardless of method of application (Figure 2). Number of leaves per plant was not affected by growth regulator application. Plant size was reduced by 28 per cent and 32 per cent with a media drench of 0.5 ppm and a foliar spray of 12.5 ppm, respectively.

Effect of light intensity on growth characteristics of Ostreatus pleurotus and O. pulmonarius

Temperature and consequently relative humidity may have confounded the effect of light intensity due to experimental design. As O. pulmonarius is a darker species than O. pleurotus, it is possible that this darker predisposition could have lessened the relative energy demands for O. pulmonarius. Further studies should examine the relationship between mushroom pigmentation and the increased tolerance to higher light intensities. 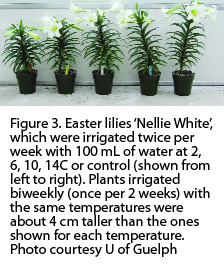 By Jessica King and Christi Vandenbos

The volume of overhead irrigation was 100 mL per irrigation, and all plants received the same amount of solution. The treatments started on Jan. 31 (plants were about 20 cm tall). Plant height at flowering increased linearly with water temperature at a similar rate for both frequencies (Figure 3), but the plants irrigated twice per week overhead were about four centimetres shorter than those watered biweekly. Plants irrigated with 2˚C water were slightly delayed.

By Charles Inthathira and Dave Pieterse

Soil pH may affect plant growth and development in reducing available nutrients to the plants at high pH and providing toxic levels at low pH. Gloxinias and cucumbers were grown in soil-less substrates adjusted to varying pH levels to determine its effects on growth and development. Initially, the lowest pH level tested was 3.5 and increased by one pH level up to a pH of 8.5. During the experiment (6-8 weeks), the higher substrate pH levels tended to decline to pH levels between 6.5 and 6, which likely was due to the fertilizer (20-8-20) used in the irrigation watering.

The cucumbers were grown from seed while the gloxinias were started as rooted cuttings before the start of the treatments. The optimal pH for cucumber growth was between 5 and 6, with a mean fresh weight of 17.7 g, compared to 10.2 g for seedlings grown below 5 or above 7.

Differences in growth were minimal for the gloxinias, but the chlorophyll content showed a slight decrease with increased pH, which resulted in gloxinias that were slightly darker at lower pH. The pH treatments of 3.5 and 4.5 had the lowest amount of growth, while plants grown in pH levels of 6.5 to 7 had adequate growth.

Related
Making the most of your R&D
HELPING GROWERS REMAIN ON THE LEADING EDGE
When plants “think” alike
‘Small country, great partner’