BELOW – FIGURE 1. Left – The adult stage of the most common native stink bug species found in pepper houses, the consperse stink bug (note the absence of light bands on the antennae). Right – The adult stage of a new invasive stink bug species, the brown marmorated stink bug (note the presence of light bands on the antennae indicated by arrows). Some other species of native stink bugs that have been found in pepper houses (not pictured) are similarly shaped but are green in colour. Photo CREDIT: P. Abram

In the last three to five years, there have been reports of stink bugs causing damage to greenhouse peppers in the Lower Mainland of British Columbia. Stink bugs in pepper houses are not a new issue – there were sporadic problems in the 1990s as well – but there is very little current information available about what species are causing these problems, how they might be monitored and managed, or how persistent or widespread this problem might continue to be in the future. It was also unclear whether a new, high-profile invasive stink bug species in Canada, the brown marmorated stink bug, might be responsible for some of these recent problems. As entomologists, we wanted to start gathering information about this pest problem and how producers are dealing with it so far. Here’s a summary of what we know up to this point and areas where there is still a lot to learn. 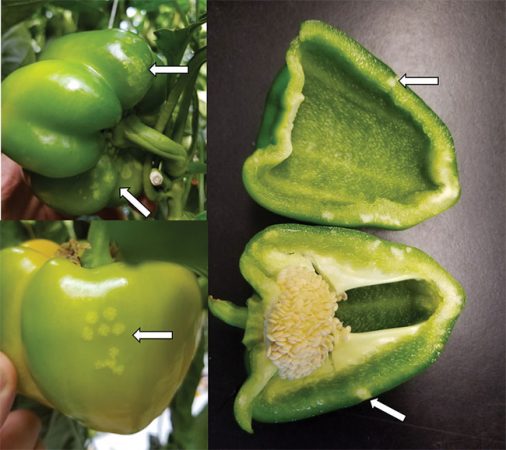 What are stink bugs, and which ones are a problem?
Stink bugs are large, hard-bodied insects that feed on a wide variety of plant hosts. Their life cycle includes an egg stage, five nymph stages, and an adult stage. Only the adult stage has wings and is able to disperse by flying. Adults are between 1 and 3 cm in body length and lay eggs in distinct clusters of about 10 to 70 pale yellow or green eggs, depending on the species. The last four nymph stages and the adult stage cause damage to plants, often directly to the fruit, by feeding with their piercing mouthparts. In greenhouse peppers, stink bug feeding results in light discolourations on the fruit that are easily visible and extend below the outer surface.

From 2016-2019, feeding from stink bugs was sometimes responsible for significant losses in pepper crops in a few Lower Mainland operations, with certain facilities having repeated problems over multiple years. For greenhouse operations with the worst issues in 2018 and 2019, stink bug damage to peppers generally began in the spring (May-June) and sometimes persisted well into the fall (October). Nymphs, adults, and eggs were recorded at different points in the growing season. This suggests that adult stink bugs, after coming out of their overwintering sites in the spring, disperse into greenhouses looking for plants on which to feed and lay their eggs. Their offspring then complete their life cycle in the greenhouse, causing damage to pepper fruits as they feed. Outdoors in Canada, stink bugs only complete one generation per year. In pepper houses, it is possible that they may be able to keep reproducing after nymphs complete their development into adults. Supporting this theory, one grower observed nymphs well into September of 2018, long after adults are known to stop reproducing outdoors. However, nymphs brought into the laboratory from two pepper houses in 2019 did not lay viable eggs after developing into adults.

To date, most of these problems appear to be caused by species of stink bugs that are native to Canada. By far the most common culprit has been the consperse stink bug (Euschistus conspersus). The adults of this species are mottled brown with green undersides, while nymphs are green and brown-coloured. The consperse stink bug is mostly known as an occasional pest of berry, tree fruit, and vegetable crops throughout western North America, but it also feeds on many wild plant hosts including a wide variety of trees and shrubs. There have also been occasional records of two other stink bug species in British Columbia pepper houses: a large green species called the conchuela stink bug (Chlorochroa ligata) and a smaller green-coloured species with subtle red markings, the red-shouldered stink bug (Thyanta pallidovirens). The latter two species are also occasional pests of other horticultural crops, but have not been significant issues so far compared to the consperse stink bug in greenhouse peppers. Particular pepper houses seem to have the same stink bug species from year to year, suggesting that the vegetation surrounding each greenhouse may be important in determining whether stink bugs are a problem and what species are present.

In addition to native stink bug species, there is a new invasive stink bug that we are keeping a close eye on, the brown marmorated stink bug (Halyomorpha halys). Originally from Asia, this invasive stink bug was first detected in 2003 in eastern North America and has caused extensive damage there to a variety of crops, including many fruits and vegetables such as peppers grown outdoors. This species was first found in Ontario in 2011 and in British Columbia in 2015, and although it has not caused any significant crop damage in Canada to date, its populations appear to be building and it is now widespread and common in natural habitats and backyard gardens in the Lower Mainland of British Columbia. Until recently, it was not clear whether this species was a threat to greenhouse vegetables. However, in 2018 and 2019, we have had reports that the brown marmorated stink bug has caused major losses of greenhouse peppers in Switzerland. Most recently, this invasive stink bug was detected in a single British Columbia pepper house in 2019, causing very limited damage to a small number of pepper plants. Damage was very similar to that caused by native stink bugs, and in general, the life cycle of this species is similar to native species as well. It remains to be seen whether this invasive stink bug will become a larger problem in the future, but in the meantime, we suggest reporting any finds to pest management professionals so that its spread and impact can be tracked. The brown marmorated stink bug can be distinguished from native stink bug species by the presence of alternating white bands on the antennae of both nymphs and adults.

FIGURE 4. A parasitic wasp on top of a stink bug’s egg cluster. Some species of parasitic wasps lay their eggs inside stink bug eggs, with the wasp offspring’s development causing the death of the developing stink bug embryo. While these parasitic wasps may be currently helping to reduce stink bug populations outdoors, their potential as biocontrols inside greenhouses has not been properly tested. Photo CREDIT: W. Wong

Stink bug monitoring and management in vegetable greenhouses
The best way to monitor for stink bugs is to train staff to look for them and the damage they cause during harvesting, scouting, and plant maintenance. Monitoring can start during the most at-risk period for stink bug entry into greenhouses, from May to July. Stink bug nymphs seem to stick around in the areas where they feed, so if there is pepper damage on a given plant, there is likely to be several stink bugs on that same plant or its neighbours. Often, stink bugs can be found on the fruit. It is important to check closely around the calyx end, as smaller nymphs can sometimes hide between the stem and the pepper fruit. Because stink bugs are relatively large compared to other pests, they can be removed by hand into a container of soapy water over the course of a day and then routinely disposed of. Putting them in the freezer to euthanize them works well. The producers we have spoken to find that training and rewarding greenhouse staff for finding and collecting stink bugs can make a very important contribution to effective management (e.g. put out a cash bounty for every 20 stink bugs found).

Right now, other options for stink bug monitoring and management are limited. In terms of monitoring, there are pheromone traps that are commercially available for monitoring some stink bug species, but in our opinion, they do not have much promise for making management decisions in pepper greenhouses above and beyond the information provided by direct observations during harvesting, scouting, and maintenance. For management, there are unfortunately no insecticides currently registered for stink bug control in greenhouse vegetables, and to our knowledge, there is no trial data from greenhouse settings to indicate which insecticides may be effective, if any. No commercially available biological control agents have any potential to aid in stink bug management, either. Currently being studied by entomologists including ourselves, there are a few species of parasitic wasps known to kill stink bug eggs. However, while these wasps may currently help to keep outdoor stink bug populations at low levels, their potential to be effective biocontrols in vegetable greenhouses is still not known.

Unanswered questions and future work
Clearly, there is still a lot to learn about stink bugs as pests of greenhouse peppers. For example, we still do not know whether this is a sporadic problem, limited to a few specific greenhouses that will diminish again as it did in the 1990s, or whether it will persist or get worse in the coming years. As populations increase outdoors, it still remains to be seen whether the invasive brown marmorated stink bug will eclipse the native stink bug species in importance and become a pest of major concern for greenhouse peppers. There is also much to learn about how vegetation management around the periphery of greenhouses could help reduce the numbers of stink bugs that are entering greenhouses in the spring. If stink bugs do start to become a more widespread problem in greenhouse vegetables, it would certainly be worth putting more effort into researching and registering both chemical and biological control options, as well as continuing to refine monitoring and cultural management techniques.

Paul Abram, PhD, is a research scientist in biological control of insect pests at Agriculture and Agri-Food Canada based in Agassiz, BC. Tracy Hueppelsheuser is an entomologist at the BC Ministry of Agriculture in Abbotsford.