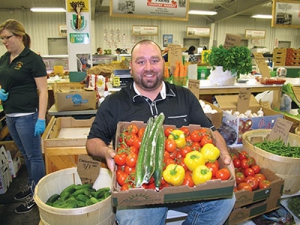 It’s an exciting time to be a greenhouse owner in Canada, but it’s also certainly a challenging time. Things like electricity prices and labour availability will need a continued close watch. At the same time, the use of exciting new technologies and energy collaborations are spreading, while demand for local products is growing.

For details on these trends and other factors that will affect the industry in years and decades to come, we’ve asked industry experts to share their thoughts.

THE BUY LOCAL MOVEMENT
Greenhouse produce is increasingly being recognized for its local, fresh, high-quality attributes, and this trend is likely to continue for the foreseeable future.

The B.C. Greenhouse Growers’ Association (BCGGA, representing about 70 vegetable operations) was recently able to educate consumers about their offerings courtesy of a marketing program supported by the provincial government’s “Buy Local” program.

The government hopes to boost the B.C. agri-food sector by about 25 per cent (to $14 billion by 2017), and greenhouses will play a major role in that growth.  BCGGA executive director Linda Delli Santi hopes more “Buy Local” funding will be forthcoming.

And the “buy local” push is not just about produce.

“We have had support from the province of B.C. to develop awareness of locally grown products,” says Bob Pringle, CEO of the United Flower Growers (the B.C. flower auction).

“A logo and other material with the slogan ‘Flowerful BC – Pick Local’ is now being used by growers and retailers. Our evidence is that these programs can be very useful and connect B.C. growers with consumers.”

“We are also seeing some preference among retailers to go with greenhouse produce because of its availability, better quality and enhanced food safety.”

Restaurants and government food service contractors (in schools, hospitals and so on) are also showing a rising preference for greenhouse-grown crops.

“I think because of all these reasons, we’ll continue to see more growth in greenhouse vegetable production,” Gilvesy says. “We’ve had a five per cent growth in acreage every year in Ontario since 2010. We had just over 1,800 acres that year, and we have about 2,500 acres now.”

A&W, which is 100 per cent Canadian-owned and the nation’s second largest hamburger chain with 819 locations, likes greenhouse tomatoes. A recent A&W press release states that the company’s greenhouse partners “can grow 25 times more tomatoes than on traditional farm fields – all while conserving land, heat and water and allowing the tomatoes to ripen on the vine longer.”

NEW, DIFFERENT AND BENEFICIAL
While demand for traditional offerings continues in the produce, floral and ornamental sectors of Canada’s greenhouse industry, there is also increasing interest in what’s new and different.

“The mini’s in every category are getting more popular, and there is more interest in ethnic offerings as well,” Gilvesy notes.

Growers in Ontario will continue to seek out new products, he adds.

In B.C., Delli Santi notes the same trend, with a few greenhouses there growing new products, such as “MidEastern” cucumbers, to meet demand.

Consumers also want new flowers. “We continue to see demand for new varieties and colours of orchids, longer-lasting plants and specialty or seasonal items,” says Pringle. “‘New,’ ‘unique,’ ‘special’ and ‘different’ are all words our customers use to describe what they want to us to offer.”

The desire for plants that stand out is partly due to the fact that more and more people are getting into gardening and landscaping as a hobby.

Members of the millennial generation (a group – ages 18 to 35 – that’s bigger than the “Baby Boomer” generation) are increasingly interested in beautifying their homes, and as they grow older, they’ll have more disposable income with which to do that. In addition, several market research firms note that young men are enjoying gardening like never before, which represents a great new market.

“Gardening is recognized as a healthy activity,” notes Dean Shoemaker, executive director of Flowers Canada Growers. “And by planting gardens on their property, people increase the value of their homes, so it’s a good investment.”

Shoemaker also points out that plants are becoming more popular inside apartments, condos and offices in addition to the traditional backyard, balcony or front porch.

“There is increasing demand for indoor ornamental plants in these environments. They clean the air, and their presence makes you feel good. Studies have also shown that plants increase worker productivity, so every workplace should have them.”

ON THE ENERGY FRONT
Greenhouse owners are concerned about electricity price increases and that will likely continue for a long time to come.

“In B.C., we do not have a regulatory framework encouraging cogen investment,” Pringle notes.

“Growers have mostly stuck to gas and biomass heating sources and have not been able to crack the regulatory obstacles of producing energy along with heat and CO2. Growers are more focused on energy efficiency and making hard decisions on what crops to grow and when.”

Delli Santi agrees. “Our members have tried to get the government to move forward on approval of cogen natural gas projects, but these are not considered clean by B.C. Hydro (the province’s electricity provider) and don’t fit with its mandate,” she says. “We are hoping for the best, and also grappling with issues like stricter boiler emissions standards.”

“In Ontario, our growers are evaluating CHPSOP 2 (combined heat and power standard offer program, offered by the Ontario Power Authority) to see if the program offer will work for their farms,” he says.

“We also need more natural gas infrastructure, so that we don’t run into a situation like we had last winter. It was very cold and the demand was high and prices were in turn very high.

“But, overall, natural gas prices are fairly low, and as long as they remain low, there is in turn less initiative for the use of biomass solutions.”

Taylor believes government programs related to energy will be critical to ensuring long-term development and growth of the greenhouse sector, and that the efficiencies that can be gained through more CHP partnerships will become increasingly important as well.

EXCITING NEW TECHNOLOGIES
While Taylor notes that uptake of LEDs remains relatively low at this time in Ontario, it is expected that will change as the cost comes down.

“The programmable nature of LED lighting schemes also lends itself to precision lighting strategies,” she says, adding that “LEPs (light-emitting plasmas) are the newest lighting source that could benefit the greenhouse sector.”

Shoemaker observes that LEDs are currently of greater interest among vegetable growers than flower growers. “It’s a different scenario,” he notes. “Research into LEDs is ongoing.”

Computerization of environmental controls and automated technologies now play a vital role in maintaining the competitiveness of the floral sector, states “The Ontario Greenhouse Floriculture Industry,” an Ontario Ministry of Agriculture, Food and Rural Affairs (OMAFRA) factsheet. “Automation, including robots, has become the standard in most operations and is used for seeding and transplanting bedding plants, pot filling, irrigation, harvesting and grading of cut flowers, and for some pesticide applications…In potted plant production, technology, primarily robotics, is being incorporated where it makes sense, eliminating repetitive activities.”  Growers are keenly watching for results from robotic research at the Vineland Research and Innovation Centre in southern Ontario.

In terms of current and future concerns relating to labour, Pringle stresses that seasonal and other foreign worker programs are very important to the flower industry.  “We do not have a workforce available to draw on without these programs.”

Delli Santi agrees. “We had lots of immigrants in the past who wanted to do greenhouse work, but the next generation isn’t as keen,” she explains. “The government programs must stay in place as the temporary nature of work in our industry doesn’t appeal to many Canadians.”

Shoemaker is pleased to hear that minimum wage in Ontario may be tied in future to inflation, which provides more stability than arbitrary wage increases.

MOVING FORWARD
We asked our contacts to identify some of the biggest challenges facing the industry over the next 10 to 20 years.

Pringle pointed to demographics as a large challenge. Will new entrants invest in the future, in terms of hours, capital, knowledge, creativity and innovation?

He also sees a challenge in creating new successful retail formats, perhaps involving more education or more/more diverse offerings. For example, plants and flowers could be offered at farmers markets or along with clothes and home décor.

In “The Ontario Greenhouse Floriculture Industry” factsheet, it’s stated that Canadian greenhouse floriculture has had a negative trade balance since 2008 that has continued to grow, reaching $111 million in 2012. This is due to a variety of factors, such as declining domestic cut flower production, smaller exports to the U.S. due to the economic downturn, currency exchange rates, and escalating transportation and packaging costs.

Shoemaker points to global competition as the biggest challenge Canadian greenhouse owners will face over the next decade or so.  “It’s good that we have good wages here and a safe work environment and safe production practices, but we need to make sure importing countries are held to the same standards we are held to,” he notes.

Gilvesy believes a big challenge will be to ensure there is an environment maintained in Ontario that supports further investment in the greenhouse industry. “We need policies and so on to support us in terms of things like labour, tax, electricity, availability of natural gas, biomass and infrastructure,” he says. “We are moving towards year-round production to maintain the markets we have, and we will need support.”

Delli Santi agrees that keeping government policy balanced is critical, especially in relation to taxes and the cost and variability of energy supplies.

She also sees the use of European technology will continue among greenhouse veggie growers in B.C.  “Many of our members have relationships with greenhouses in the Netherlands, where some of the most advanced technology in the world is developed, and these new technologies are very transferrable as the climate here in the Lower Mainland is quite similar,” she notes.

It’s clear that many encouraging trends and challenges exist for Canada’s greenhouse sector. We encourage you to contact us with your thoughts.

By the numbers heading into ’14
Sales of greenhouse, nursery and sod products in Canada were nearly $3.5 billion in 2013, up 5.6 per cent from 2012, according to Statistics Canada.

This gain was partly the result of a 16.1 per cent increase in greenhouse vegetable and fruit sales, which accounted for 36.1 per cent of all greenhouse, nursery and sod sales.

Tomatoes represented 41.1 per cent of greenhouse vegetable and fruit sales, while peppers accounted for 31.1 per cent.

Sales of greenhouse flowers and plants grew 2.6 per cent to $1.4 billion.

Floriculture represented 52.7 per cent of total greenhouse sales in 2013.

Indoor and outdoor potted plants accounted for more than half of flower and plant sales.

Increases in greenhouse sales were accompanied by a 2.8 per cent rise in total operating expenses.

Plant material purchases were up 10.8 per cent to $441 million, while labour costs grew 1.8 per cent to $638 million. However, the total number of seasonal and permanent greenhouse workers decreased 7.5 per cent to 33,761.

Labour costs accounted for 29.7 per cent of total operating expenses.

On the nursery side, sales of nursery products declined 2.8 per cent to $673 million. The total nursery area declined 12.9 per cent to 18 279 hectares.

Treena Hein is a freelance writer in Ontario.
Print this page