May 10, 2016
By Cheryl Lennox and Nathalie Dreifelds


May 10, 2016By Cheryl Lennox and Nathalie Dreifelds 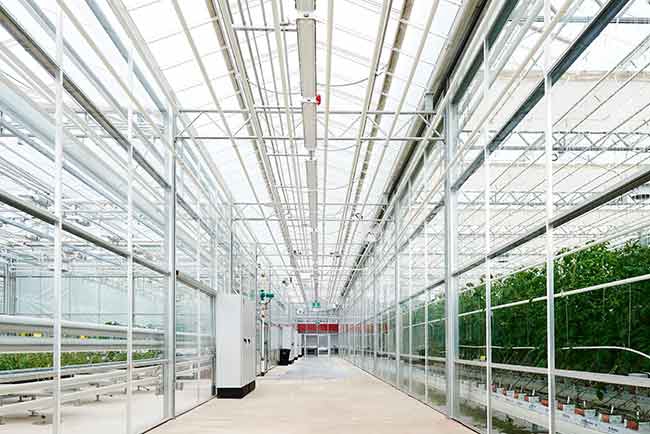 The official opening of the new greenhouse is June 3. Visit vinelandresearch.com for more information.

There has to be more to it than that.

“If you build it – and they need it – they will come,” the CEO of the Vineland Research and Innovation Centre says.

The proof is in the new pre-commercial greenhouse at the centre’s campus in Ontario’s Niagara region. Its 40,000 square feet of research space was built to commercial standards, and it’s where Vineland’s scientists are determining the best ways to advance greenhouse horticulture through breeding, improved plant performance and pest and disease management. It will also function as a testing ground for the development of robotics, automation and sensing technologies vital to the future of the industry.

Large industry organizations are making the Vineland campus a destination to hold meetings. They’re keen to learn more about the good things happening under glass there when previously they might have gone elsewhere for inspiration.

“It is a flagship,” Brandle says. “It’s also emblematic of the rebirth of Vineland.”

WORLD-CLASS RESEARCH HUB
The Vineland Research and Innovation Centre was established in 2007 to transform the former research station into a world-class horticulture research hub that would foster a vibrant and prosperous Canadian industry.

The greenhouse is the first major capital investment to happen at Vineland since the 1980s. It came to be after extensive consultations with greenhouse vegetable and flower growers, ensuring the creation of a facility that would meet their needs now and in the future.

It includes 13 compartments – two large-scale for vegetables and 11 for flowers or multi-purpose use – that will bridge the gap between innovation and commercialization. In fact, they already are.

“If you’ve been inside, you’ll see it’s impressive and it’s been full since the start, which means there’s a lot of pent-up demand for this space and the work happening there,” Brandle says.

The space replicates commercial greenhouses with its scale and infrastructure, including low-pressure sodium lighting in the flower sections, below-ground trenching to reduce shading, and total control of environmental variables, such as temperature, humidity and light. It has also been built to change with the industry; lighting was designed for future flexibility and options.

Most importantly, the greenhouse enables Vineland to emulate commercial scale production the same way it’s done in the industry. It’s also done under local growing conditions to better understand their impact on new varieties of plants and vegetables.

“A CATALYST TO GROWING THE INDUSTRY”
“This will be a key catalyst to growing the industry,” Brandle explains. “The industry has reached a point where it needed to create that technology base – that new knowledge for our markets. You can’t import that so there’s great value in what’s produced there but also in the technology. This greenhouse lets us discover and evaluate things that are good for our region, specifically.”

As the largest pre-commercial horticulture research greenhouse in North America, this space will cultivate collaboration between industry and science, and drive economic growth. “This signals the future,” Brandle says. “It positions us to support a very successful industry to become more successful.”

This feature was prepared by Cheryl Lennox, director, marketing and communications, and Nathalie Dreifelds, advisor, communications and public relations, with the Vineland Research and Innovation Centre.