Sept. 4, 2013 – The Starcluster™ pentas series of Syngenta Flowers, Inc.
has received the Medal of Excellence Industry’s Choice Award for 2013.

Sept. 4, 2013 – The Starcluster™ pentas series of Syngenta Flowers, Inc. has received the Medal of Excellence Industry’s Choice Award for 2013.

Starcluster debuted at the 2013 California Spring Trials as one of six new series from Syngenta Flowers. It was nominated for the award by a panel of industry experts who viewed the series first-hand at the trials and were impressed by its large flowers and strong stems. 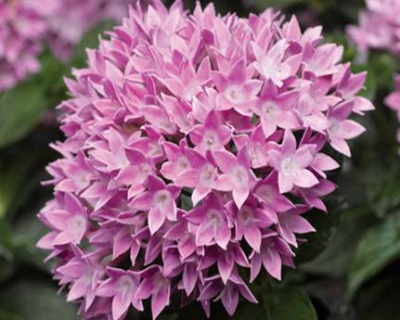 “Pentas has become more mainstream in the last five years because of the demand for plants that are relatively quick off the bench, look stunning at retail and are tough in heat and humidity,” says Allan Armitage, professor emeritus of horticulture at the University of Georgia.

“I was most impressed by the Starcluster series. It caught my eye because it has strong stems and is larger and more vigorous than most other retail introductions. With four colours in the series, growers and retailers have a sufficient choice to show off these plants.”

A part of the GoldFisch Heat Lovers® program, Starcluster is bred to perform through hot summer conditions. Its well-branched habit and strong stems ease the stress of shipping, and uniform blooming ensures bench-run shipping.

This stunning new series is ideal for large, premium containers and landscape settings, making it the focal point of any garden.

The Medal of Excellence Industry’s Choice Award is presented annually by Greenhouse Grower.

Click here for more information about the Starcluster pentas series, or information on the many varieties of Syngenta Flowers.