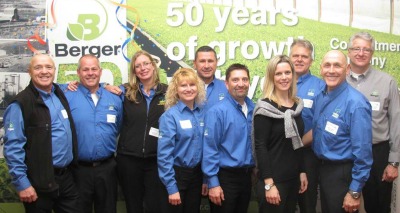 The day began with an educational forum that included a pair of timely presentations.

Albert Grimm, head grower at nearby Jeffery’s Greenhouses, and industry consultant (and Greenhouse Canada columnist) Melhem Sawaya from Focus Greenhouse Management led a discussion on the topic of “Minimizing Your Mistakes is the Secret for Profitable Greenhouse Operations.”

Mistakes are important learning tools, said Grimm. They clearly illustrate the differences between good and bad crops. Mistakes only hurt when they’re not recognized or acknowledged.

He added that a lack of qualified horticulturists is a serious problem and is limiting the expansion of the industry.

“Listen to the more seasoned people in your operation so you an avoid the mistakes they have done,” he said. Each can also be an excellent sounding board.

“And listen to the new people in your operation. They will have a new way of looking at things that you have been looking at for years.”

Following the seminars, guests enjoyed a social hour and later a banquet with the SRL and Berger team. Among special attendees were Julie Daigle and Benoit Corbeil of Berger Peat Moss.

“The entire Specialties Robert Legault and Berger Peat Moss team is grateful for the opportunity to serve the horticultural industry and to have so many loyal across Canada,” said a spokesperson.