Most cut flower books barely mention grasses. But heck, anything you want is on the Internet, right? Nope. It’s truly surprising how little is out there. 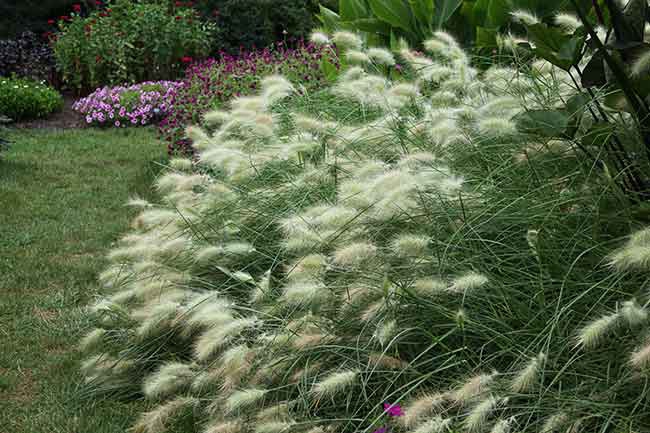 When you say “cut flowers,” most folks don’t picture grass plumes. But man does not live by red roses alone, and florists love happy surprises.

For growers, grasses are a great crop. Compared to traditional cuts, they’re tough and adaptable. Many grow in marginally fertile soils and thrive with minimal maintenance. There’s a wide range of heights, colours and textures, and a reasonable harvest season. Deer leave them alone.

Grass flowers can be fine and delicate, like Muhlenbergia, or huge and fluffy, like Cortaderia. And flowers aren’t the whole story: long, graceful foliage makes a great filler or accent in arrangements.

Here are some grasses that work well as fresh cuts.

Big, annual Pennisetum varieties ‘Prince,’ ‘Noble’ and ‘First Knight™’ have wide, near-black blades. With these non-flowering hybrids, it’s all about the foliage.

Blades are typically sold to florists in bunches of 10 or more. Harvesting technique is simple: one grower says, “whack with grass clippers and pick out the good stuff.”

P. villosum, Feathertop grass (Zones 8-10). Puffy, ivory-white plumes sprawl charmingly in the border, but for cuts, support it with netting.

Calamagrostis: Feather reed grass (Zones 4-10) is a cosmopolitan genus, found in Asia, Europe and the Americas. C. xacutiflora ‘Karl Foerster’ was the first grass named Perennial Plant of the Year. Hybrids ‘Avalanche,’ ‘Eldorado’ and ‘Karl Foerster’ are usually sterile and won’t self-sow. C. arundinacea var. brachytricha, whose pink-tinged plumes are the biggest in the genus, is severely underappreciated.

Chasmanthium latifolium: Northern sea oats (Zones 5-9). Chasmanthium tolerates wet winters and can be harvested at different stages. Some growers cut when the inflorescence is fully mature, just before it turns tan. Others prefer it still soft, silky and green.

Cortaderia selloana: Pampas grass (Zones 8-10). A beautiful, tender giant. Feather-duster plumes soar to 10 feet (three metres) and beyond. Cortaderia can be grown in very large containers and moved indoors, but that’s a lot of work. The foliage is dangerously sharp. Why mention something so unsuited to Canada? The flowers. They’re phenomenal.

Panicum virgatum (Zones 4-10). A North American native with many cultivars. ‘Heavy Metal’ gets high marks for upright posture, steel-blue foliage and ease of production. ‘Hot Rod’ has rich maroon-red blades. Both tolerate clay soils, won’t blow down, and can be cut at several stages.

Most cut flower books barely mention grasses. But heck, anything you want is on the Internet, right? Nope. It’s surprising how little is out there.

For unusual cuts, the online info mother lode is a bulletin board maintained by and for members of the Association of Specialty Cut Flower Growers. Ohio-based ASCFG is a tremendous resource, well worth the price of membership, especially if you’re new to cuts. Members are famously willing to share information on everything from sourcing seeds to building your own cooler. They’ve made the mistakes and can save you from repeating them. Learn more at ascfg.org.