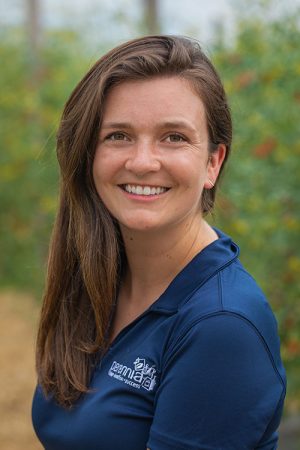 Nova Scotia’s horticulture sector may be known for its berries, tree fruit and field-grown vegetables, but protected crop production is rising in importance. So much so, that provincial development agency, Perennia, hired a dedicated extension specialist to support the growing sector.

“It is exciting to see the recognition for greenhouse growing in Nova Scotia, and I’m really looking forward to developing the program,” says Talia Plaskett, who stepped into the newly created role of protected crop specialist at Perennia last June.

She currently oversees all crops grown under cover, including flowers, vegetables, berries and cannabis, produced in structures ranging from low tunnels to complete indoor grow facilities.

No stranger to greenhouses, the University of Guelph graduate previously worked for Vineland Research and Innovation Centre in Ont., assisting in plant pathology projects before becoming a senior research technician on their vegetable breeding team.

Energy and labour as key hurdles

While the protected agriculture sector in Nova Scotia serves a smaller population compared to some other greenhouse-dense provinces, there are many similarities in evolving technological trends.

“We are seeing increased interest in vertical farming and container farms and the adoption of lighting,” says Plaskett. She also notes a growing interest in moving from soil into soilless substrate, and maximizing inputs. “The producers here have noticed climatic changes in their lifetimes, and the adoption of a more reliable production system is really on the forefront of everyone’s minds.”

“Although land costs are cheaper compared to other areas across Canada, the cost to keep a space heated and lit is just not feasible for a lot of people,” says Plaskett. This has limited growers’ abilities to expand operations.

“Another challenge, like most places, is labour. I think the promise of year-round employment that can accompany greenhouse growing, is more appealing than short seasonal positions that leave you looking for work multiple times a year,” she adds. “Hopefully this is something we can work towards over time.”

Plaskett hopes to increase the adoption of protected production in the province. To achieve this, she’s developing resources that will help new growers transition to protected agriculture and help existing growers adopt new technology.

“The shift from field production into a structure is a big one, as is the switch from soil to substrate, as is the addition of lights into a grow space!” she says. “The more support producers have going through those growing pains, the more likely they are to undertake a big investment.”

Plaskett is currently involved in a pilot project to produce soilless long cane raspberry under cover.

“We do have producers that are working throughout the year, but maximizing this production and reducing the amount of food we need to bring in from elsewhere would be great for the economy and for increasing food security.”

What she’d like to see, is a province-wide initiative for adopting climate-friendly practices and energy sources. “It is no secret that we are living unsustainably, and seeing a serious investment into green energy and a focus on efficient growing practices would be huge.”