Prime Minister among early guests to view some of the world’s leading urban agriculture technologies. 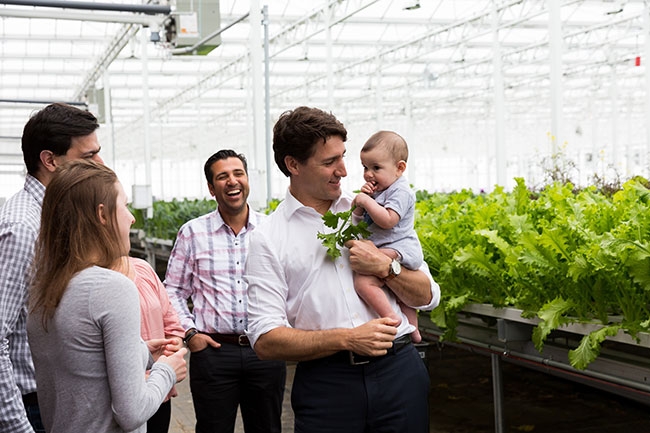 The Prime Minister with one of his younger tour hosts.

The company has completed its third highly automated greenhouse in the Montreal borough of Anjou. Among the first guests to tour the 63,000-square-foot rooftop facility was Prime Minister Justin Trudeau.

The new facility will have year-round production of over 40 varieties of greens and vegetables.

Its six years of rapid growth and significant success in rooftop greenhouse design, co-operation with local sustainability-focused farmers, and appeal to thousands of Montreal consumers make Lufa Farms one of the most successful large-scale urban agriculture models in the world.

In short, it is demonstrating how cities can sustainably feed themselves from within their own boundaries.

Trudeau was given a full tour of the leading edge facilities by company co-founders Mohamed Hage and Lauren Rathmell and their daughter Dani (above), and founders Kurt Lynn and Yahya Badran. The Prime Minister showed great interest in the innovative complexity of the rooftop greenhouse, and even took time to harvest a basket of fresh greens for his family.

“Backing innovative companies like Lufa Farms is really what the Fonds’ strategic planning is all about,” says Gaétan Morin, president and CEO of the Fonds de solidarityé FTQ. “And the reason we can make these types of investments is because of the Trudeau government’s reinstatement of the labour fund federal tax credit in 2016.”

FIRST GREENHOUSE OPENED IN 2011
Lufa Farms began operating the world’s first commercial-scale rooftop greenhouse with only eight employees in 2011. It was built with the goal of using sustainable irrigation, energy and growing systems for cultivation of pesticide-free produce. The first greenhouse produced more than 25 varieties of vegetables with weekly delivery to a few hundred Montreal consumers.

Consumers loved the locally grown products and the year-round availability, and the need to expand was soon evident.

Lufa’s second rooftop greenhouse began operation in 2013 with 43,000 square feet. With it, the company introduced an online marketplace so that consumers could buy fresh Lufa Farms produce along with with locally sourced produce, meat, dairy, bread and other products provided by hundreds of local farmers and food operations.

“A novel model from the start, Lufa continues to innovate by adopting new practices and technologies for their third greenhouse in Anjou to grow even more fresh products.”

The most recent greenhouse caps six years of steady growth and innovation. The Lufa Farms team now includes more than 140 employees, grows over 70 different vegetable varieties, and delivers more than 10,000 food baskets every week of the year.

The Prime Minister with one of his younger tour hosts.

“Being able to finance this project in Quebec has been an important milestone for us. It’s testimony that commercial-scale urban farming is truly economically viable, and that a sustainable economy is possible,” says Mohamed Hage, president and a founder of Lufa Farms.

“It also represents an important sustainability milestone for a city. Urban growing centres like Lufa, employing local workers, in concert with local farmers that provide fresh, responsible and locally produced goods to thousands of local residents everyday, represent a model for every city in the world.”

Applying greenhouse technologies to structures with a bird’s-eye view of their neighbourhoods is challenging.

“We began this venture because of our passion for rooftop farming. We didn’t start out as farmers and I’d never even grown a tomato before,” says Lauren Rathmell, a founder and greenhouse director of Lufa Farms.

“But we did what made sense to us as technologists and problem solvers.

“Today, we understand that successful urban agriculture requires not only advanced greenhouse technology, but also direct-to-client distribution, and working together with local, sustainable farmers and food artisans.

Founded in 2009 by Mohamed Hage, Lauren Rathmell, Kurt Lynn and Yahya Badran, Lufa Farms now has a combined urban growing space of 138,000 square feet. And they’re not resting on their laurels. There are plans for more projects in Quebec urban centres, and also in select New England locations in the U.S.

Related
Urban or rural: Where to build a greenhouse
Québec’s ‘agri-food jewel’ expands
Cannabis sector off to a running start
Fighting off the phloem feeders