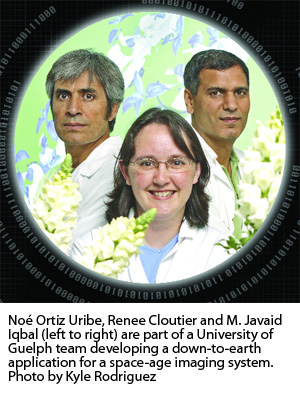 Canada’s $2-billion greenhouse industry depends on lighting, heating and cooling – three costly commodities in a northern climate. With rising energy prices, University of Guelph growers and researchers are looking to space technology for ways to screen and select healthy, energy efficient plants. It’s led them to a Canadian-made 3-D laser camera system (LCS) that could help them identify cultivars that flourish in less-than-optimal conditions.

The laser camera was developed by Neptec Design Group Ltd. for the U.S. National Aeronautics and Space Administration (NASA) to take high-resolution images of the International Space Station and inspect the shuttle’s tiles prior to re-entry. But Prof. Bernard Grodzinski and his team in the Department of Plant Agriculture have a down-to-earth application.

“Growers could realize substantial cost-savings by choosing cultivars that perform well under less heat and light,” says Renée Cloutier, a graduate student in Grodzinki’s lab. “This technology could help enhance the research to identify these cultivars.”

Using a laser and a pivoting mirror, the LCS can scan a wide area. Its precise beam of laser light reflects off objects such as plants. A detector captures these reflections and creates a 3-D image of the plants. Using this data, researchers can determine stem height, canopy area, leaf size, and other measurements. It’s more accurate than traditional methods to measure these traits and it’s non-invasive, says Cloutier.

By scanning multiple plants at the same time, the LCS is a big timesaver for the University of Guelph researchers using the new technology to monitor plant growth. The camera can also pinpoint disease-stricken plants in the early stages before growers notice visible signs of infection such as wilting leaves.

They conducted their research with snapdragons, one of Canada’s important cut flowers. The team inoculated half the plants with root rot fungus and compared the growth of healthy and infected plants.
Root rot, caused by a Pythium infection, doesn’t always kill plants immediately. But in the early stages – before it’s visible to the naked eye – it can begin stunting growth and leaf development.

Within a few days of inoculation, the growth rate of the diseased plants began to slow. The laser camera detected early changes in the plants too subtle for humans to see otherwise, says Cloutier. In fact, the LCS detected changes within 15 to 20 hours after the plants were infected – much faster than the typical three to five days it would take with human observation.

The camera’s benefits aren’t just limited to ornamental plants such as snapdragons, says Cloutier. It’s an excellent research tool that could have a wide range of applications including automation of many greenhouse processes.

“This technology could have a big impact on monitoring crop health and production,” says Cloutier.

Heather Filby is a writer with the SPARK (Students Promoting Awareness of Research Knowledge) program at the University of Guelph.


Related
PROBING POLLINATION PROBLEMS
Growing In The Green: September 2006
GROWING IN THE GREEN: February 2008
Growing in the Green: Heading into the home stretch