An organic grower and a mixed flower and veg operation among the latest converts. “If this works out, we should be able to grow plants year-round.” 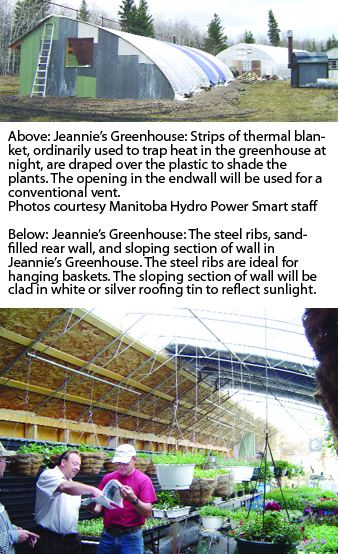 David Neufeld of Boissevain, in southwestern Manitoba, has been in the industry since 1993. “It was something I could do while managing the household,” he said. “My wife (Maggie) was working full time out of the house.

They had settled in Boissevain after spending eight years in southern Africa, under the auspices of the Mennonite Central Committee, helping local farmers.

“We are Manitoba’s only certified organic greenhouse operator,” he said. Room to Grow also grows annual flowers, and native and general perennials.

Neufeld has built nine greenhouses to date. He built his first solar greenhouse with locally available material wherever possible to keep costs down and avoid long delivery times. The greenhouse features 2×6 spruce rafters that support the plastic covering. The rear wall is insulated to R-50 with stacked straw bales sandwiched between layers of stucco. Sheets of roofing tin form an inner wall, 4" from the stucco, to hold gravel that stores heat during the day and releases it at night. A wood-fired boiler supplies supplemental heat, while a small fan circulates air between double sheets of poly covering the front part of the greenhouse.

Neufeld plans to build a small livestock barn along the rear wall with a connecting duct providing the plants with carbon dioxide. He is also considering collecting warm air from the greenhouse during the day and circulating it through pipes in the floor slab of a neighbouring workshop. At night, the airflow would be reversed to return heat to the greenhouse.
“We started growing operations in the solar greenhouse this past winter,” he said. “If this works out, we should be able to grow plants year-round.”

He is currently looking into different forms of high-efficiency supplementary lighting.

INDUSTRY NEWCOMERS
Tim and Jeannie Cameron own Jeannie’s Greenhouse in Ashern, a town located in the central Interlake region. They are relatively new to the greenhouse business, having started in the summer of 2005. “We’re both still working full time,” Tim explains. “We love plants and see the greenhouse as something we can continue to do when we retire.”

The Camerons grow tomatoes, cucumbers and hanging baskets. They began building their 23' by 100' solar greenhouse last fall and have been operating out of it since February.

Jeannie's Greenhouse is constructed much like Liu’s model in Elie (just west of Winnipeg), though with some modifications. For example, the Camerons have a wood stove just inside the greenhouse entrance to supplement heat from the solar wall and keep temperatures up early in the season. A furnace fan distributes heated air from around the stove by blowing the air through a poly duct strung along the base of the rear wall.

Tim is considering replacing the wood stove with a small electric furnace. If he were doing it again, he would build the rear wall slightly higher to increase the steepness at the front to make it easier to push snow off the roof.

They’ve found the single layer of 6-mil poly tends to snap in the wind, which causes tears in the plastic. They’re planning to add another layer of plastic, with air blown between the sheets, to eliminate the problem and increase the insulation value.

“We still have to work on the ventilation,” he said. “We need bigger fans.”  He is installing a 4' by 4' vent to improve ventilation.

Cameron has been using sections of the thermal blanket that came with the greenhouse to shade the plants and protect them from sunburn. Parts of the blanket, however, are tearing. He suggests that traditional black poly or knitted shade fabric would be a less expensive alternative.

Myron Love is a freelance writer and  photographer in Winnipeg.