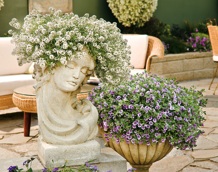 Aug. 5, 2009 – Proven Winners Snow Princess won big at the 2009 Medal of Excellence awards at the
Ohio Short Course, taking home both the Editor’s Choice and the
Industry’s Choice awards.

Snow Princess™ won big at the 2009 Medal of Excellence awards at the
Ohio Short Course, taking home both the Editor’s Choice and the
Industry’s Choice awards—the first time this has ever been done in the
21-year history of the competition. The annual Medal of Excellence
awards are the flowering plant world’s equivalent of the Oscars.

The all-star performance of Snow Princess is due to a breeding
breakthrough—it is sterile. Unlike other Lobularia varieties, it spends
no time producing seed. Instead it throws all of its energy into new
flowers, making the variety very vigorous and creating a lush cascade
of bright white blooms all-season long.

The academy, better known as the judging team, was comprised of
industry professionals, including Delilah Onofrey, editor of Greenhouse
Grower magazine. One reason they tapped Snow Princess for the top
awards was due to its beauty in all kinds of growing conditions. “We
heard great things about Snow Princess in trials in Florida and its
strong weather performance, which also proved to be true at the
University of Georgia this summer,” Onofrey says.

Snow Princess also earned accolades for its stunning, season-long
performance. Faster growing and more heat tolerant than all other
varieties in the genera, it blooms with abandon from mid- to late
spring until the first frost. Refusing to back down in the dog days of
summer, it unfurls new blooms and quickly rambles over the edge of
pots, hanging baskets and window boxes. Grow Snow Princess alone, or in combination with other vigorous and
long blooming varieties such as Superbena® verbenas and Supertunia®
petunias. Along with the show-stopping vigor, it also fills the
landscape with sweet perfume—it’s a feast for the senses.