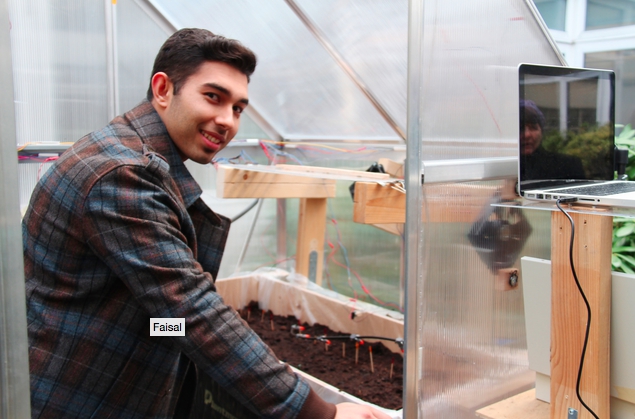 Team member Faisal Emami tries out the sensors for the automated greenhouse project.

The six-person team created the high-tech greenhouse, named Plantosphere, in less than four months for a fourth-year capstone project.

The greenhouse is equipped with 15 sensors that monitor an array of factors including temperature, humidity and light levels. Seventeen thousand lines of code control its myriad mechanisms, all programmed to provide an optimal growing environment year-round.

“It’s so simple that you don’t need any technical education or experience to operate it,” says team member Jane Horton – welcome news for would-be gardeners born without a green thumb.

Biomedical engineering student Terry Hannon sowed the seeds of the project when his friend went to Japan for a year, leaving Hannon in charge of his garden plot at the Burnaby campus.

“It was a real pain,” says Hannon. “It kept getting too wet and animals kept taking the produce.” But necessity is the mother of invention, and the problem sparked a creative solution.

“I started thinking it would be great if we could put a greenhouse there,” says Hannon. “Then I started thinking, ‘what if we had it automatically water for us?’”
Hannon pitched the idea to his engineering capstone project team, and the project took off.

Highlights of the complex automated system include strategically placed sensors to trigger shades, vents and powerful fans that cool the greenhouse on warm days, while a mister activates when humidity levels dip below the optimal range.

With further iterations to lower production costs, the team says the greenhouse could help people in hostile climates grow plentiful produce, despite drought or excessive rain. True to its space-inspired name, Plantosphere could even be used to grow crops on other planets.

For now, Hannon has plans closer to home. He hopes to launch a Kickstarter campaign to produce a second demo of the greenhouse aimed at hobbyists, schools and universities.

“The greenhouse can be an educational tool, allowing researchers to vary parameters to see how plants are affected by different environments,” he says.

The greenhouse could also keep school vegetable plots flourishing while unattended during the summer months.

Reprinted with permission of SFU News of Simon Fraser University.