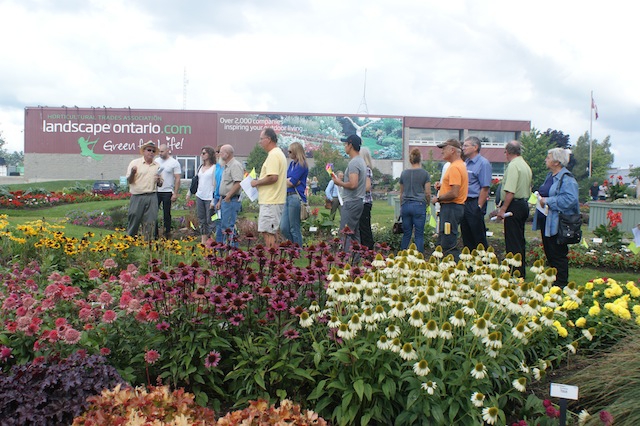 Visitors had the opportunity to tour the trial gardens outside Landscape Ontario's office in Milton, Ont.

Sept. 9, 2014 – Narrowing down which plants to stock in the garden centre could be a real challenge if the number of strong performers thriving in Landscape Ontario’s trial gardens are any indication of what the horticulture industry has to look forward to in the coming years.

Sept. 9, 2014 – Narrowing down which plants to stock in the garden centre could be a real challenge if the number of strong performers thriving in Landscape Ontario’s trial gardens are any indication of what the horticulture industry has to look forward to in the coming years.

The annual industry open house, held at Landscape Ontario’s home office in Milton, Ont., on Aug. 21, offered horticulture professionals an opportunity to tour more than 400 different bedding plants, 34 different cultivars of rose bushes, and a number of vegetable varieties for small urban spaces. The tour capped off a morning of informative presentations by industry experts, allowing visitors to scope out some of the new varieties highlighted during the presentations.

Several rose varieties enjoyed quite a bit of buzz following a presentation about pending releases, delivered by John Bakker of Bakker & Sons and Rumen Conev of Vineland Research Centre. “Oscar Peterson,” which has been in trials for several years now, is a hardy, self-cleaning variety that is clean of black spot and doesn’t require deadheading. “Campfire” is also clean of black spot, blooms throughout the summer, and is hardy to -40C. “Never Alone,” which will be available next spring, is a hardy variety that blooms into the fall. This variety will be enjoying a lot of promotion prior to its release. It was developed to promote the Never Alone Foundation cancer support charity. The foundation is supported by the Canadian Football League, which will promote the “Never Alone” rose at the 2014 Grey Cup. Both the “Oscar Peterson” and “Never Alone” varieties are low maintenance and bred to survive in tough conditions year after year.

Later in the morning, during a presentation on new plant material for the landscape, Syngenta’s Terry Talsman noted several varieties that have been performing well in the trial gardens. Some of his favourites include: the heat-loving “Grandahlia” series, which is bred for flowers that sit just above the plant’s foliage; the “Bandana” trailing series, another heat-lover with spreading vigour; the “Sanguna Radiant Blue Petunia,” which offers early and continuous flowering, plus a unique pattern that’s sure to catch the consumer’s eye; the “Pinto Premium Lavender Rose” seed geranium with a versatile habit and unique colour; the “Florific Sweet Orange” impatiens which isn’t susceptible to impatiens downy mildew; and the “Ramblin’ Amethyst Petunia,” a trailing variety.

Following the tour of Landscape Ontario’s trial gardens, visitors were invited to make the short trip to the University of Guelph’s trial gardens, where varieties are being grown in slightly different soil conditions.

The open house was organized by Landscape Ontario, Ontario Parks Association and the University of Guelph.