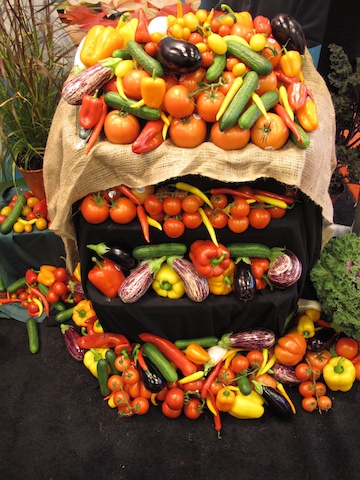 Aug. 31, 2016 – As the local food movement gains momentum and becomes even more mainstream, consumers across Canada are demanding an increasing supply of fresh, home-grown fruits and vegetables.

Take a look at the produce aisle at your grocery store – chances are you’ll find a greater selection of foods grown in your province in season than you’ve been able to see for decades. There are delicious peaches from Niagara, potatoes from Alliston, strawberries from Simcoe and many other local staples that give Canadian consumers healthy food options produced in Canada.

The appeal of eating local is easy to understand – foods produced closer to where you live taste fresher and healthier because they spend less time in transit and on store shelves, they help reduce our impact on the environment and they support local commerce, which fuels our economy on a broader level.

But it’s also very important for people to understand how these fruits and vegetables are grown. It’s not as simple as planting seeds in a field or greenhouse and adding water.

Agriculture is an incredibly labour-intensive pursuit. The families that grow our food – many who have been farming for generations – often struggle to find a suitable supply of workers to help with the difficult task of growing crops.

It’s a challenge that’s been getting worse for many years. The labour shortage is projected to grow dramatically over the next decade – nearly doubling to 114,000 workers needed by 2025, compared to demand for 59,000 workers today, according to a recent study by the Conference Board of Canada.

The shortage is fuelled in part by aging demographics, competition with other sectors and few numbers of young people pursuing careers in farming.

That’s where the highly successful Seasonal Agricultural Workers Program (SAWP) comes in. For the past 50 years, the program has been supplying farmers experiencing domestic labour shortages with seasonal workers from Mexico and the Caribbean. This growing season, farms across Canada have hired approximately 30,000 seasonal workers through the program to fill vacancies.

To be clear: this program isn’t about trying to replace Canadian workers with cheaper labour from overseas. SAWP is a “Canadians first” program, which means supplementary seasonal farm labour is hired from partner countries only if agricultural operators cannot find domestic workers willing to take the same jobs.

Famers who rely on the program to meet their labour needs do hire Canadians. The challenge is that not enough domestic workers – Canadians who may live in the rural areas where these farms are located – are interested in taking these positions, often because they are seasonal in nature.

Recent labour market research by the Canadian Agricultural human Resource Council cited SAWP as a key reason our horticultural industry is thriving. Looking at Ontario as an example, it said the program plays a crucial role in helping the industry generate $5.4 billion in economic activity and approximately 34,280 jobs in Ontario.

It’s estimated that two jobs for Canadians are created in the agrifood industry for every agricultural worker hired through the program.

So what would happen if SAWP were to disappear or be dismantled after a half century of success? The ramifications are huge.

Let’s start with what Canadian consumers would see in the produce aisles at their grocery stores – far less fresh, local foods and a lot more fruits and vegetables from the U.S. and Mexico.

Canadian farmers pay the highest farm worker wages on average in North America and face intense pressure from international competitors trying to eat into their market share. Many operations in our agrifood industry simply couldn’t remain economically viable if it weren’t for this program. Without a steady source of reliable seasonal workers, they’d be forced to stop growing fruits and vegetables altogether or move into less labour-intensive crops, like grains and oilseeds.

In turn, the economic spinoffs created by these farms – thousands of jobs and billions of dollars in spending through the supply chain – would take a significant hit, hurting Canada’s overall competitiveness and rural regions that can’t afford to lose what economic activity they’ve got.

Looking even further, let’s consider what would happen to the men and women who come to Canada for several months a year through SAWP to improve their lives and help our agriculture industry flourish.

Many of these workers have benefitted from working through the program for decades and have counted on it to lift their families out of chronic poverty. Assuming each worker directly affects five in his or her family, that adds up to 150,000 people whose lives are enriched by SAWP.

The same can be said for thousands of Canadian farmers and consumers who appreciate access to an abundance of healthy, local foods.

(Ken Forth is president of Foreign Agricultural Resource Management Services, the non-profit organization that administers the Seasonal Agricultural Worker Program. He is also an owner/operator of a broccoli farm in Lynden, Ont.)