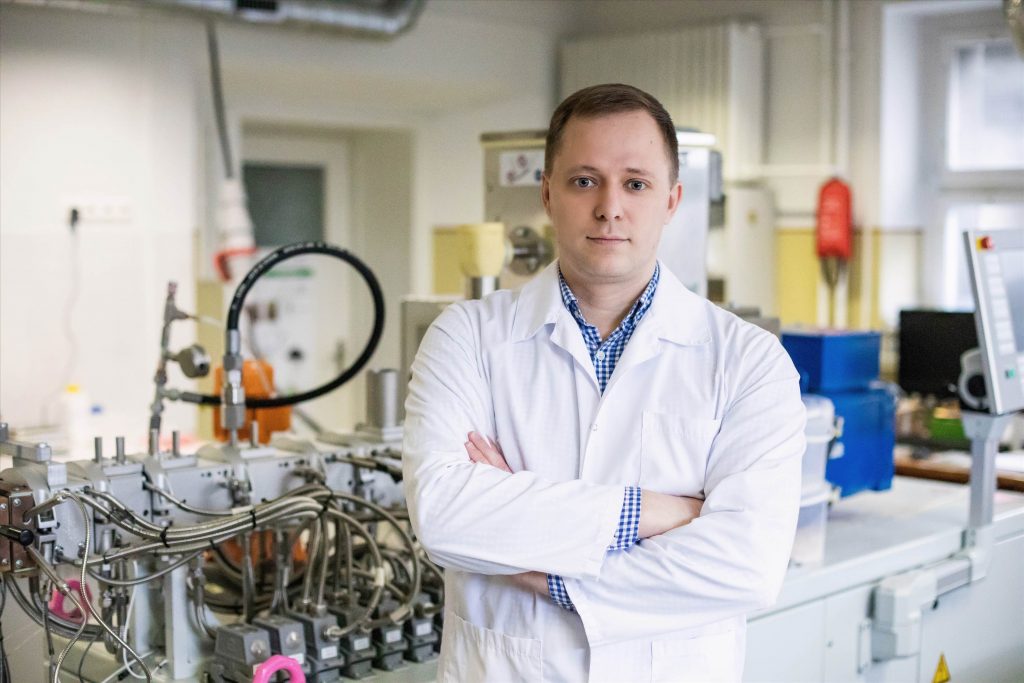 A team of researchers from KTU Faculty of Chemical Technology have created a fully-compostable packaging for food products from bioplastic, which disintegrates with the help of microorganisms. Photo credit: Juste Suminaite, KTU photo

Globally, the amount of plastic produced in a year is roughly the same as the entire weight of humanity. Only 9 percent of it is recycled, and the rest is slowly degrading in the landfills. The plastic disintegration process takes from several hundred to a thousand years. During this time, plastic is disintegrating into microplastic particles, which get into the ground waters and from them, into our food and environment.

It is estimated that by 2050, there will be more plastic than fish in our oceans.

War with plastic waste is among the priorities of the current generation. The European Parliament has approved a law banning a wide-range of single-use plastic items, such as straws, cotton buds and cutlery by 2021, and numerous legislations around the world are being passed in order to control plastic waste. Scientists are also taking part in the movement while creating more environmentally-friendly solutions.

A team of researchers from the KTU Faculty of Chemical Technology have created a fully-compostable packaging for food products from bioplastic, which disintegrates with the help of microorganisms.

“We are used to get[ting] sandwiches, snacks, pastries, sweets and many other products in a paper bag with a plastic window. With a clear window on the front face, the products in the bag can be viewed easily. Although paper is biologically degradable, it is complicated to separate paper from plastic, and the package is considered non-recyclable and non-compostable. However, if we made the window from biodegradable plastic, it could be composted. Moreover, we could even use the bag for collecting biodegradable waste and put all into the compost bin together”, says Dr Paulius Pavelas Danilovas, the lead researcher of the team.

Compostability is a characteristic of a product that allows it to biodegrade under specific conditions under the influence of microorganisms.

“There are plenty of microorganisms in compost and they digest our plastic very well”, says Danilovas.

According to EU standards, in industrial compost centres, which sustain the temperature of 58 degrees Celsius, bioplastic degrades in half a year. However, in a compost bin at home, the process would take a couple of years.

Bioplastic created at KTU laboratories is made from cellulose – a natural material, the main building block of plant cell membranes. Usually derived from timber, cellulose is the most common biopolymer found in nature.

According to researchers, the main challenge while creating bioplastic is not only making it degradable but also transparent, as this quality is often required by customers.

“Usually, to become fluid plastic needs to be heated. However, if you heat paper (which is also based on cellulose) it will not only not become liquid, but will also burn! We are excited to have found composites, which not only allow cellulose to turn into fluid condition but also are non-toxic, which is very important in all products related to food handling”, says Danilovas.

He admits that being environmentally-friendly has its cost – the biodegradable package created at KTU is several times more expensive than usual. However, the growing number of eco-conscious users is encouraging industries to take an interest in biodegradable packaging alternatives.