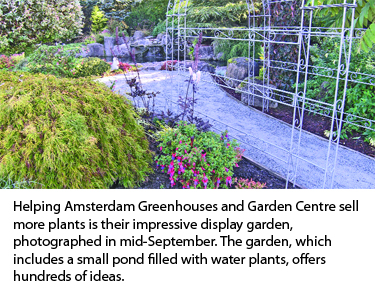 AMSTERDAM GREENHOUSES
The first stop was Amsterdam Greenhouses and Garden Centre in Pitt Meadows. The 28-year-old business is owned by Ron and Lidy Kok.

Ron studied horticulture in the Netherlands. He built his first greenhouse, to grow cactus, as a 14-year-old. “I’ve always been interested in plants,” he recalled in welcoming the CanWest delegates.

Ron and Lidy emigrated to Canada in 1974. Ron first worked for AgCanada and the Vancouver Parks Board before he and Lidy decided to go into business for themselves. They bought this property in 1979. The company has since grown to 40,000 square feet of greenhouses and 20 employees.
They originally hoped to establish a wholesale operation, but found it difficult to find customers given the number of established suppliers in the area. They decided to join the United Flower Growers and market their plants through the UFG.

They also began to retail some of their bedding plants. In 1981, they built their first glass greenhouse of 3,000 square feet. Included was a small store of about 400 square feet.

Among their first crops was cyclamen, which at that time was quite a niche product. “Now,” quips Ron, “cyclamen is quite common.” Cyclamen has remained one of their major crops and is grown throughout the fall and winter.

The company has always been strong on marketing. They began newspaper advertising early, and have also tried some radio ads, though the effectiveness of the latter is more difficult to gauge. They also advertise in gardening magazines. “As well as we are known,” Ron explained, “we still advertise on a regular basis.”

All of their products are grown within the province. “We’ve always wanted to support local growers, first of all.”

They grow some of their own perennials, though most are brought in. In the spring, they have bedding plants and hanging baskets, including the company’s renowned moss baskets.

The company was one of the first retail growers in the province to complete the Canadian P. ramorum Certification Program. This program was developed by the BCLNA and the CNLA in conjunction with the Canadian Food Inspection Agency, Agriculture and Agri-Food Canada, and the B.C. Ministry of Agriculture, Food and Fisheries. It is designed to minimize the risk of Canadian or U.S. nurseries receiving or spreading P. ramorum. “We only buy from certified growers,” said Ron.

They incorporated a host of disease prevention measures, including the use of large foot mats at every entrance, which they modified with their own automated application system for the disinfectant. “We turn it on for about half-an-hour in the morning and it’s done. We don’t have to keep reapplying (the disinfectant).”

Other measures include fencing, biosecurity signage at all entrances and gates, delivery measures that require trucks to unload in the parking lot, placement of the garbage bins at the front of the property, a registry system for visitors to the production areas, and a traceability program to assist the company should a problem be detected. Customers returning plants for managers to examine are asked to place them in a plastic bag.

They over-winter their nursery stock in cold frames. A disastrous cold snap one winter in the 1980s resulted in significant losses for many growers in the province, and most now store their plants in greenhouses or cold frames during the winter.

In the spring, Ron and Lidy open up about 12,000 square feet of greenhouse space for retail sales. “People like to

be able to select from among a few thousand geraniums rather than a few flats,” Ron explained.
Once the bedding plant season has concluded, staff clean up the area and they immediately begin work with the cyclamen. They grow about 100,000 plants a year in two crops.

Little spraying is done. One spray for thrips in the fall is usually sufficient. They’ve found bug problems to be minimal.

They also use composted pig manure in the soil mix that seems to suppress root diseases by enhancing the biological material in the soil. “It has a lot of good bacteria to keep the bad guys out.”

An important part of their marketing program is their educational workshops. A small area within the greenhouses is draped in black cloth for the sessions.

The company also offers a garden design service. The designers can develop a plan to suit any lifestyle and budget.

Amsterdam Greenhouses and Garden Centre was named Business of the Year in 1999 by the local chamber of commerce. The company also helped host the 2002 International Fuchsia Convention tour.