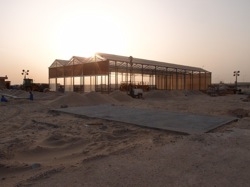 A pioneering plan to turn Qatar’s desert into lush, profitable land, will mark a major milestone later this month, opening while the world watches the upcoming United Nations Climate Conference in the country’s capital.

During the Doha Climate Conference, the Sahara Forest Project will launch operations at its $5.3 million pilot facility. Green technologies, including concentrated solar power (CSP), and a saltwater-cooling system that mimics nature’s hydrological cycle inside a greenhouse, will be put to the test at the one-hectare plant, located near the country’s coast.

According to an information package prepared by the Sahara Forest Project:

“The greenhouse structure will consist of three bays that will compare the performance of ETFE and polythene roof coverings on the horticultural yield. The cooling system will be an evaporative cooler at one end of the greenhouse. The cool air will be supplied under the plants via polythene ducts to ensure that the cool air is distributed evenly along the greenhouse and at low level. As the air heats up, it rises and is expelled via high level openings in the end wall.”

“The middle bay will have a twin skin ETFE membrane roof that forms a void over the greenhouse. This is linked to an evaporator pad and fan that can use the waste heat from the CSP to evaporate seawater or regenerate the desiccant and produce hot moist air. When the air is passed through the void at night it will cool and the moisture in the air will condense out to give fresh water that can be used for irrigation of the plants.”

Water leaving the greenhouse will pass over evaporators to create sheltered and humid environments. These areas will be planted with crops that can benefit from these growing conditions, including food crops.

The concept for the plant has been under development since 2008.

To find out more about the technology involved in the project, check out this CNN article.

A saltwater cooling system inside the greenhouse will mimic the natural hydrologic cycle. (Courtesy of Sahara Forest Project.)