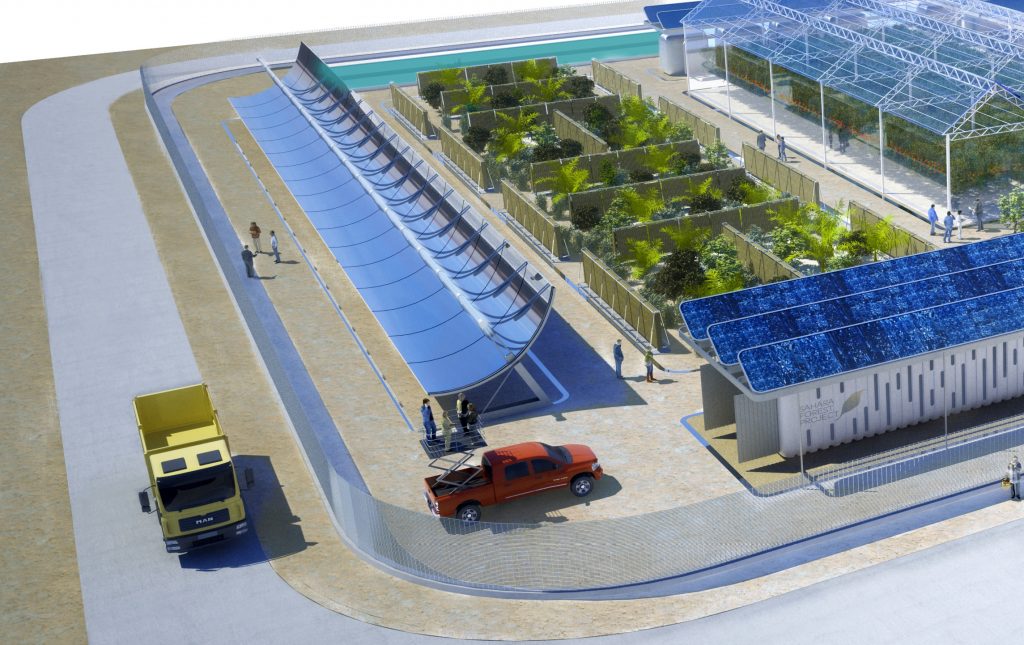 A drawing of The Sahara Forest Project pilot plant.

The Sahara Desert seems the unlikeliest place on Earth for greenhouse food production. But The Sahara Forest Project is planning just such an endeavour to address challenges such as clean water, clean energy and sustainable food production – with brand new technology.

The Sahara Forest Project (SFP) has a vision of creating profitable production of food, water, clean electricity and biomass in desert areas. This is done by combining already existing and proven environmental technologies, such as evaporation of seawater to create cooling and distilled fresh water for use in greenhouses.

A one hectare site outside Doha, Qatar, will soon host the SFP Pilot Plant. In February, SFP signed a cooperation agreement for building the Pilot Plant with Yara International ASA and the Qatar Fertiliser Company, Qafco.

It will contain a unique combination of promising environmental technologies carefully integrated in a system to maximize beneficial synergies. A wide specter of lead­ing experts and technology developers are taking part in the effort to realize the project. A cornerstone of the pilot is greenhouses utilizing seawater to provide cool and humid growing conditions for vegetables.

An important part of the pilot is to demonstrate the potential for cultivating desert land and making it green. Outdoor vertical evaporators will create sheltered and humid environments for cultivation of plants. Additionally, the pilot will contain outdoor hydroponic raceways for cultivation of halophytes – plants tolerant of irri­gation with salty water.

Details of the pilot plant

Greenhouses
Saltwater-cooled greenhouses will provide suit­able growing conditions that enable year-round cultivation of high-value vegetable crops in the harsh Qatari desert. The greenhouse-structure will consist of 3 bays that will compare the performance of ETFE and polythene roof cov­erings on the horticultural yield. The cooling system will be an evaporative cooler at one end of the greenhouse. The cool air will be supplied under the plants via polythene ducts to ensure that the cool air is distributed evenly along the greenhouse and at low level. As the air heats up it rises and is expelled via high level openings in the end wall.

The middle bay will have a twin skin ETFE mem­brane roof that forms a void over the green­house. This is linked to an evaporator pad and fan that can use the waste heat from the CSP to evaporate seawater or regenerate the desic­cant and produce hot moist air. When the air is passed through the void at night it will cool and the moisture in the air will condense out to give fresh water that can be used for irrigation of the plants.

By using saltwater to provide evaporative cool­ing and humidification, the crops’ water require­ments are minimized and yields maximized with a minimal carbon footprint.

Outside vegetation and evaporative hedges
The water coming from the greenhouse will be at a concentration of about 15 % salinity. To reduce the water content further, the brine will be passed over external vertical evaporators set out in an array to create sheltered and humid environments. These areas will be planted to take advantage of the beneficial growing condi­tions for food and fodder crops and for a wide range of desert species. New candidate spe­cies for use as harvested and grazing fodder for livestock, and as bioenergy feedstock, will be identified and characterized from among native desert plants. The carbon sequestration benefits of various planting and cropping approaches will be measured and compared.

Photovoltaic Solar Power
The Pilot Plant will be supported by state of the art PV-technology. Dust arresting from the surrounding vegetation and water for cleaning the PV-panels will ensure an efficient electricity generation.

Salt production
As the water is evaporated from saltwater the salinity increases to the point that the salts pre­cipitate out from the brine. The last stage of this process will take place in conventional evapora­tion ponds.

Halophytes
Beyond traditional horticulture and agriculture, halophytes – salt-loving plant species – will be cultivated in saltwater. These hardy plants, often already well adapted to desert conditions, are highly promising sources of fodder and bioen­ergy feedstocks that can thrive in highly saline environments. However, irrigating with saltwa­ter directly into the soil can cause significant environmental harm. The Qatar Pilot Facility will implement and test a variety of novel cultivation techniques to allow low-cost halophyte cultiva­tion while ensuring no saltwater enters sur­rounding soil or groundwater aquifers.

Algae production
A state-of-the-art 50 m3 algae test facility – the only of its kind in Qatar and the larger region – will enable commercial-scale research on the cultivation of marine algae species native to the Gulf and Red Sea for use as nutriceuticals, biofuels, and as animal and fish fodder. New synergies with the SFP saltwater-greenhouse infrastructure, mariculture operations, and soil remediation methods will be optimized, while cutting-edge research in cultivation and harvest­ing methods is carried by SFP staff and its team of international collaborators.

Yara International ASA is the world’s leading chemical company that converts energy, natural minerals, and nitrogen from the air into essential products for farmers and industrial customers. Today, Yara’s global workforce of more than 7300 employees represents a great diversity and knowledge that enables Yara to remain a leading performer in the industry. The company has a global presence with operations and offices in more than 50 countries and sales to more than 150 countries. In 2010 Yara had total revenue of NOK 65.4 billion.

Qafco is a key producer and exporter of ammonia and urea based fertilizer to the international market. Qafco was founded in 1969 and is now owned by Industries Qatar (75%) and Yara International ASA (25%). Through scientific strategic plans and integration of the latest technologies, QAFCO has emerged as the world’s largest single site producer of urea and ammonia with an annual production capacity of 2 million tons of ammo­nia and 2 million tons of urea.

The Sahara Forest Project Foundation facilitates and promotes research, knowledge and the use of technologies which enable revegetation and the creation of new jobs through the profit­able production of food, water, biomass and electricity. The SFP Foundation has established a set of Ethical Guidelines appli­cable to all commercial Sahara Forest Project Initiatives.