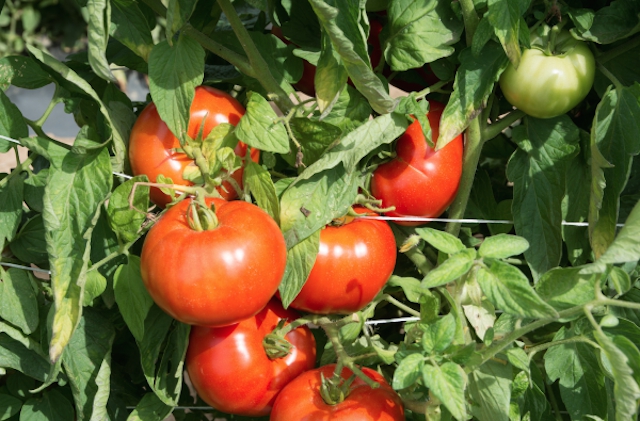 Aug. 27, 2015, New Brunswick, NJ — A new tomato that combines the nostalgia-inducing flavour of an heirloom with the durability of supermarket varieties is Rutgers’ answer to anyone who wonders what happened to the flavourful Jersey tomatoes of the past.

The Rutgers New Jersey Agricultural Experiment Station (NJAES) has tested hundreds of plants to try to create a new version of the luscious tomato – that carried the Rutgers name – and was popular from the Depression through the 1960s.

“What people remember as the Jersey tomato was really the Rutgers tomato,” said Tom Orton, a professor in the Department of Plant Biology and Pathology. “It was ubiquitous. People grew it in their backyards. It had a high flavour that explodes in your mouth and makes you say ‘wow, that is really good.’’

Now as the university’s 250th anniversary approaches, a team of researchers are working to create a new and improved Rutgers tomato, reviving a variety that was thought to be lost to history.

Since the project began in 2010, researchers have narrowed their search down to three possibilities.

AN ANNIVERSARY OF THE SCHOOL

Although the official name of the new tomato has not been chosen, it will be selected to honour Rutgers’ 250th anniversary, said Orton, who oversees the university’s tomato breeding program as a specialist with NJAES.

The new Rutgers tomato, bred for home gardeners and New Jersey farmers, is being grown and tested around the state. The seeds are expected to be released for sale starting in January.

The experiment station works closely with New Jersey growers to develop new plants as part of its mission to boost local agriculture and share Rutgers’ research with the public. Orton is also working to develop a version of the new Rutgers tomato suitable for large-scale commercial farmers that should be ready in 2018.

The project to recreate the Rutgers tomato was made possible by the discovery eight years ago that Campbell’s Soup Company had retained derivatives of the original Rutgers parent seeds. The original tomato was released in 1934 as the result of a collaboration between the Camden-based company and the university.

The firm, red, round, flavourful tomato proved more resistant to rot than its predecessors and became a staple ingredient in the Campbell’s Soup product line. It was used by several other large companies including Hunt’s and Heinz, and was popular on American dinner tables.

“For a long time Rutgers was known by gardeners and vegetable farmers for the Rutgers tomato,’’ Orton said. “It ushered in the world of mechanized food processing. It is a variety that is our namesake and went on to change the worlds of agriculture and food processing.’’

INITIALLY HAD BEEN DEVELOPED WITHOUT A PATENT

But like many innovations of the era the Rutgers tomato was developed without a patent, and seed companies made changes to it over time.

“The Rutgers tomato carried our name, but the university had no control over it after it was released to the industry,’’ Orton said. “It wasn’t a tribute anymore to the work that went into to it. We want to create a new variety that is named for the institution, retain control over it and maintain its quality.’’

Rutgers researchers are working to develop the tomato with the perfect balance of acid and sugar. The new variety will provide fruit earlier in the season. It also will have a higher yield, a uniform colour and be more resistant to cracking.

“We are retracing our history and hope to come up with something better,’’ said Peter Nitzsche, an associate professor and agricultural agent for Rutgers Cooperative Extension who has been working with Orton on the project.

He said many consumers believe they are buying Jersey tomatoes from the grocery store in the middle of the summer, but they are not. That is why people are often disappointed by the taste, he said.

“A lot of the fruit in the grocery store is picked green and ripened during long distance shipping,’’ Nitzsche said. “While other breeding programs put a priority on firmness and the ability to ship, we have been narrowing the field based on flavour.

’’ Food lovers will notice the difference when they get a chance to taste the new Rutgers tomato, Orton said.

“I think it will be great in everything, consumed in a salad or sandwich, or on a plate with a little mozzarella cheese and basil,’’ Orton said. “I’ve tried them all these ways and I think they are terrific.’’

Once the new Rutgers tomato is released, when someone asks whatever happened to the flavourful Jersey tomato they remember from summers past, Orton will have his answer ready. “If you grow this one in your backyard you will have it.’’