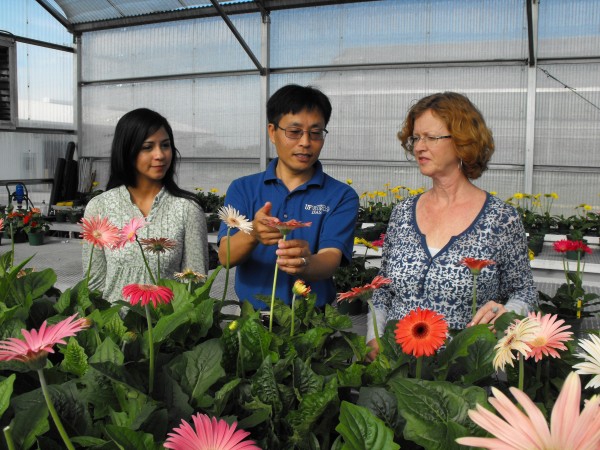 Zhanao Deng, center, a UF/IFAS professor of environmental horticulture, is busy breeding gerbera daisy cultivars that are resistant to powdery mildew, the most destructive fungal disease for this type of flower. Deng said his daisies are also becoming more attractive. The daisies are just one example of the types of plants and flowers being bred by UF/IFAS scientists that you can give your loved one this Valentine’s Day. UF/IFAS FILE PHOTO

Feb. 11, 2016, Gainesville, FL — Roses are red; violets are blue, and University of Florida Institute of Food and Agricultural Sciences researchers are developing better breeds of Valentine’s Day plants just for you.

Here are just a couple of examples.

• Zhanao Deng, a professor of environmental horticulture at the UF/IFAS Gulf Coast Research and Education Centre in Balm, Florida, is breeding gerbera daisy cultivars that are resistant to powdery mildew, the most destructive fungal disease for this type of flower. Deng said his daisies are also becoming more attractive.

“These daisy cultivars can be used for cut flowers or potted plants,” he said.

Deng and his team have released several new gerbera daisy cultivars, and some of them performed really well in industry trials in Georgia, Ohio and Texas.

The research doesn’t stop there as Deng and his lab are breeding more lines for the future. Meanwhile, they are developing DNA-based molecular markers and trying to find the gene or genes that control resistance to the powdery mildew.

“We hope these markers will help the development of new powdery mildew-resistant cut gerbera daisies, which are popular for many occasions, including Valentine’s, weddings and more,” Deng said.

• Thomas Colquhoun, a UF/IFAS assistant professor of environmental horticulture at the Gainesville campus who specializes in plant biotechnology, has been working to identify and quantify the profiles of volatiles – or chemicals that make for a more pungent fragrance – from various cultivars of oriental hybrid lilies.

Colquhoun and his team are currently running RNA-sequencing experiments to identify ways to improve lily volatiles.

They want to reduce the fragrance to make it more palatable. After all, smell can be powerful, and they’re looking for nuanced aromas, Colquhoun said.

“Some lily flowers emit enormous amounts of volatile molecules, and for some consumers, this is off-putting,” Colquhoun said.

“So our long-term goal is to give lily breeders traits to select to reduce the amount of fragrance emitted. Consumers will have more option of large beautiful flowers without the overpowering fragrance that normally comes with the oriental hybrid lily flowers.”