But the approach to integrating the solutions is more important than the individual solutions themselves. 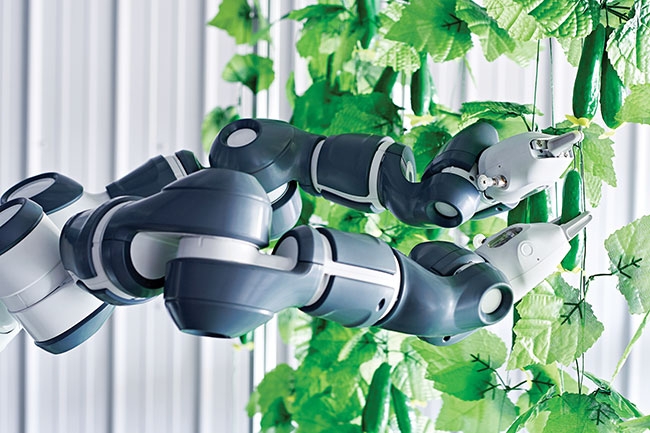 Canada’s greenhouse vegetable sector faces a great many challenges, including labour regulations and minimum wage requirements, availability of labour, and how to manage future human resource needs in conjunction with technological development.

While experts agree that automation and robotics could provide a solution to the sector’s challenges, they also recognize that simply implementing technology is not the right approach. The right approach is an integrated one that’s built from the bottom up.

Data, says Bennett, is a big one, including anything to do with analyzing data, cluster modeling and software development. Many of the tools currently available could be further integrated, and not doing so can sometimes limit the returns received from implementing them.

The sector could also use additional tools for resource optimization and integration, she adds. Many tools are needed to not only grow the crop, but to ship it as well, like pallets and packing boxes.

“We need to further our supply chain integration, making sure that we have what we need, when we need it, [and] at the right time,” she says. Additional integration will improve quality control, making sure that greenhouse vegetables exceed market standards. Growers will look to automation for help in reducing energy consumption, labour costs, and shrinkage.

A helping, robotic hand
Jos Balendonck, a researcher from Wageningen University and Research (WUR) in The Netherlands, sees the same challenges in Europe, and adds a few more to that list. Demands are high in greenhouse production, he says, and it’s difficult to find skilled labour on time. Greenhouse growers are also up against environmental and food safety legislation and are being watched closely by consumers for their use of pesticides and other resources. Plus, growers need to deliver quality product to their customers on time.

Meeting these demands is always a problem, he says. “But we think information technology and robotics will help growers to cope with these demands.” By using this new technology, they get an extra pair of eyes and hands – as well as minds – in managing their greenhouse.

WUR takes a different approach to addressing these challenges. As a public research institution, they do not have the funding to commercially develop the innovations and bring them to market. Instead, they work together with industrial partners and the greenhouse sector on R&D and innovation projects that are funded by a combination of public and private sources. They take on the task of developing new innovations, available as generic submodels used in building several types of robots like the Sweeper robot, which automatically picks sweet peppers when they are mature. The industrial partners and sector are involved early on in the process, leading to a higher chance of success of bringing it to market.

Developing a robot for use in a greenhouse can be very challenging, though.“The greenhouse environment is actually pretty hostile for robotics and automation,” Bennett points out. “It’s very dynamic, it’s very humid, [and] there is a lot of movement and variables. It’s a much more dynamic environment than humans see it.”

Speed of operation and high capital costs also impede their implementation. While the environment might be harsh on robots, Balendonck points out just how difficult it is to have humans complete the more complicated tasks in a greenhouse.

“For instance, if you want to know everything about the crop you have [in] a greenhouse of 30 hectares, it’s very tough to send in people to scout the whole greenhouse [to] see every plant and how it’s performing,” he says. “Instead, you could send in a robot and it gives you information on every square inch.”

But if one wants to take a more holistic approach, it means looking beyond the technology itself, and evaluating implementation, delivery and maintenance. It also means safeguarding the health of the plants. Greenhouse tomatoes literally hang by a thread. If the robot were to pull that thread, the whole plant could end up on the floor. These are operational details that will impact the efficiency and safety of the robot, the speed at which it works, as well as its overall cost.

University of Guelph engineering professor Dr. Medhat Moussa knows these challenges well. He’s spent the past many years working on Guelph’s Intelligent Greenhouse Automation System – or GIGAS for short. Moussa says GIGAS takes a data-driven approach, monitoring every plant in the greenhouse on a regular basis. Doing so allows the end user to build a plant profile that helps reduce uncertainty and overcome clutter. It also provides growers with an overview of their entire operation, including long-term yield prediction and ways to improve labour productivity.

GIGAS has also expanded to include other important tasks, such as scouting for diseases and monitoring plant growth. A prototype of the scouting robot has been in its testing stages at a commercial greenhouse in Leamington, Ont.

“It is very easy to say that I am going to have a robot that picks up a tomato,” he says. “I can test it in the lab and publish a paper on that.”

“[But] while something can happen in the lab and show great promise,” he adds, “when you actually … implement it in the field, it’s a totally different story and you might actually end up failing.”

This robotic cucumber harvester is one of several innovative projects being developed at Vineland Research and Innovation Centre, in collaboration with other partners in the sector.

Similar projects receive government funding
Last year, Agriculture and Agri-Food Canada announced a federal investment of up to $5 million to the Automation Cluster, led by Vineland Research and Innovation Centre (Vineland), under the Canadian Agricultural Partnership. The funding will be used to develop and test a robotic harvester for greenhouse cucumbers; to develop smart, wireless irrigation technologies for potted flowers and vegetables; and to develop an automated solution to harvest mushrooms. The cucumber-harvesting project is in its infancy and faces similar challenges to GIGAS.

“There are a lot of elements that are needed to develop that type of technology,” says Dr. Tania Humphrey, chief scientific officer at Vineland. “There are layers of complexities and different elements, including vision systems to be able to detect cucumbers and be able to figure out the green of a cucumber and the green of a leaf or stem.”

“Then there’s the whole element of designing the grippers and the arms, and then coordinating the arms,” she continues. “There’s going to be a conveyance system, a kind of platform that moves between the rows with the robotic arms attached.”

Collaborating with industry partners such as OGVG, Vineland plans on working with greenhouse growers to develop the best system possible.

“These technologies are very complex and sophisticated. There are various elements of them being done elsewhere and there’s no need to reinvent them all from scratch,” she says. “The only way these types of projects will succeed [is] if you work with multiple partners – with academic collaborators and company partners on manufacturing and engineering, as well as constant back-and-forth with growers in the commercial environment.”

“Everything we develop has to be applied in that commercial environment,” adds Humphrey. “It has to meet a realistic payback period to make these systems affordable to growers. You’ll get further quicker if you work with partners.” Earlier this year, a $40.5 million federal investment was announced for the Canadian Agri-Food Automation and Intelligence Network (CAAIN) to boost automation and digitization, building on artificial intelligence, robotics and precision agriculture.

CAAIN will be spearheaded by Alberta Innovates and Vineland, in partnership with Alberta’s Olds College and Lakeland College.