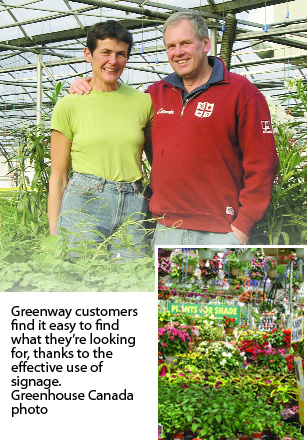 When The New York Times writes about your southwestern Ontario garden centre, and you’ve also hosted a stop on a high-profile international environmental awareness campaign, you know your expanded marketing efforts are taking flight.

Greenway Blooming Centre in Breslau, Ontario, located about an hour’s drive west of Toronto, was already a well-established and successful grower/retailer business when owners Kees and Sabina Kennema decided in 2004 to build the Naturium – an innovative and educational centre on all things to do with butterflies and hummingbirds – next to their garden centre and greenhouses.

Key among the Naturium displays are 20,000 butterfly specimens collected by John Powers, a Cambridge, Ontario, lepidopterist of international acclaim who’s known as The Butterfly Man®. Powers is also a good friend of the Kennemas, and helped them fine-tune the philosophy for the project. “He’s been dreaming butterflies for more than 45 years,” said Kees.

The Times article briefly described the Naturium’s collection, and also noted it was one of the Canadian pit stops for last fall’s Journey Of The Monarch ultralight aircraft flight, which traced the 5,500-kilometre (3,415-mile) route taken by these butterflies from eastern Canada to their winter home in Mexico.

The story also noted the Naturium was hosting Butterfly Days in September, during which time about 1,000 tagged butterflies would be released.

This was great exposure, and the Kennemas were soon fielding calls from throughout the U.S.
Kees said the Naturium, which also includes a butterfly garden – in the shape of a butterfly – was designed to help Greenway increase its appeal as a destination garden centre.

“If you want to do something to draw attention to your garden centre,” he explained during my tour earlier this year, “you have to do something spectacular. Small changes or improvements aren’t enough.”
The Naturium is quickly becoming a ‘must-see’ destination for nature-lovers. It features a variety of educational materials related to butterflies and hummingbirds, along with materials to help consumers develop gardens for these special guests.

Special events ensure a steady stream of visitors. For example, the Kennemas work with a local environmental group each spring to show youngsters how to build bluebird bird houses. Some 400 were constructed last year, and the goal was 600 this year.

Bus tour operators, including one from as far away as Michigan, are putting the Naturium on their speed dial.

Also helping raise the profile of the facility – quite literally – is noted chainsaw artist ‘Bearclaw’ Jack Eppinga of Michigan. He crafted a pair of keenly detailed eagles, right down to the massive talons, from a black walnut tree that had fallen on the property. One of them will be placed atop a Naturium totem pole.
This year, a stand-alone butterfly greenhouse is being added, giving visitors a close-up view of the winged inhabitants.

The Kennemas started small when they entered the industry. Kees had worked for many years as a plant breeder and seed researcher, mostly in grain crops, and he traveled the world extensively before they settled in Canada. Sabina had been a professional florist in Switzerland, with a strong background in European garden plants and trends.

In the mid-1980s, they bought a farm in Monkton, Ontario. It was a sheep operation for a few years before they took Sabina’s flower hobby to the commercial level with the construction of a small greenhouse and the launch of Highlight Blooming Centre. It worked well in balancing cash flows, noted Sabina, as they sold between 250 and 300 sheep each year to a local butcher. The now 20,000-square-foot greenhouse is used for annuals, perennials, winter-hardy roses, fresh herbs, and, of course, butterfly and hummingbird garden plants.

The success of that operation prompted them to expand with the purchase in 1997 of the much larger Breslau nursery, which is now 60,000 square feet. The two operations produce some 15,000 hanging baskets, well up from the original 250 in 1992.

A perennials area, with retractable shade cover, was added. They also invested in an automated watering system.

Previously a mixed wholesale/retail grower, the company has moved to mostly retail production, the exception being Christmas cactus shipped each fall to area retailers.

Sabina is well known to area gardeners, thanks to a pair of TV gardening shows broadcast each spring.

She also posts timely features to the Greenway website.

Kees and Sabina are often assisted by their three grown sons when they’re not in school. Under the mentorship of Powers, youngest son Marco has developed a butterfly farm to breed butterflies for release at special occasions, such as weddings and parties.

With any visit to a greenhouse, the talk soon turns to energy prices. The Kennemas are nearing the end of a five-year natural gas contract, and they know this means a significant price hike. “It’s a bitter reality,” said Kees.

They have done their best with crop scheduling to minimize heating, combining cold-tolerant annuals with perennials in early season production. It means longer crop times, but the plants are sturdier and fuller, with great eye appeal at retail. “We’ve always believed you have to sell only top-quality plants and at a reasonable price,” explained Kees. “You can still make a living.”

They also section off areas not yet in production with heavy curtains. Space is gradually opened up as new crops are started in preparation for spring.

With a great many butterfly and hummingbird plants, very little chemical control can be used. A commitment to IPM, including weekly crop scouting, means only hot spots are treated. “Very seldom do we have to do a blanket spray,” said Kees.

This also means they can count on considerable help from their smaller ‘neighbours.’ Natural predators are forever finding their way in through vents and helping keep pests largely under control. The diligent crop scouting, combined with the abundance of natural predators, has helped reduce chemical usage by 85 per cent over four years.

Specialty gardens are becoming increasingly popular. People can sit back and enjoy both the plants and the butterflies and hummingbirds they attract and nurture.

“Education is the link between the greenhouse and the garden,” said Sabina.

The goal is to help consumers be more successful with specialty gardens. “They can then select the right plants, the correct watering, and how to grow without sprays,” she said.

Butterfly and hummingbird gardening, she explained, can range from something “as simple as a single 16" container on the patio, or something covering an entire backyard.”

Young people are especially interested in developing host gardens for winged visitors. “It teaches more respect for nature,” said Sabina, “and how to be careful in protecting the environment.”
• www.greenwaybloom.com, or www.naturium.ca