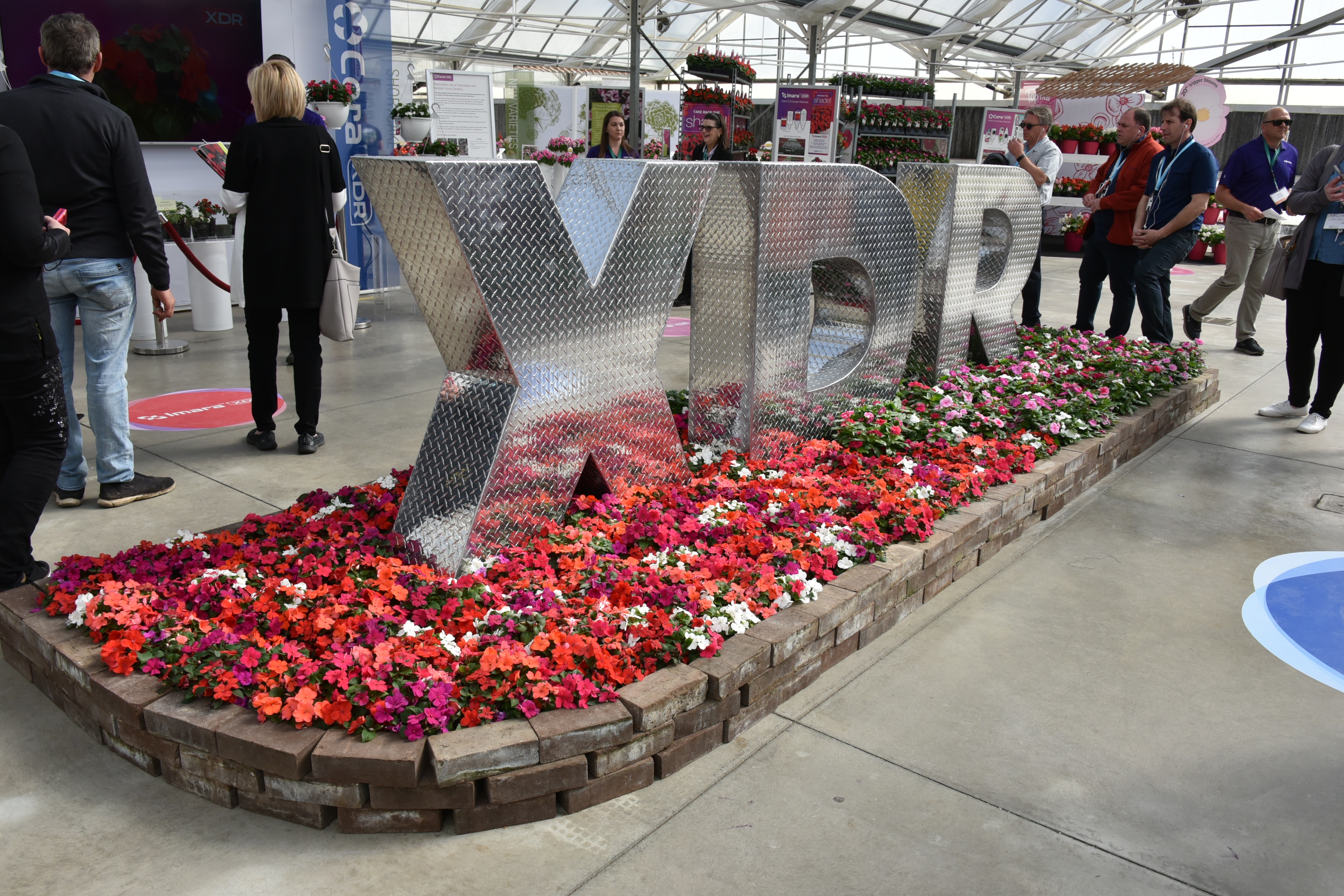 In March of this year I had the opportunity to travel from LA to San Francisco on a Ball-sponsored bus that was inhabited primarily by Canadian sales staff and buyers.

This proved to be a great opportunity for interacting with greenhouse and horticultural professionals from across Canada. We couldn’t help but talk about plants and some of the interesting and exciting discoveries we made as we travelled the coast. This was my first ever trip to the California Spring Trials (CAST) and I’ll be sharing my highlights with you in the next few issues of Greenhouse Canada magazine.

Breeding against disease and pests
I first became aware of problems with Impatiens walleriana (the traditional shade-loving garden impatiens) in the Ontario landscape during the summer of 2011 when severe defoliation would occur in mid to late summer. As it turned out, the problem was caused by Plasmopara obducens, otherwise known as Impatiens Downy Mildew (IDM), and the problem grew to essentially eliminate the widespread use of impatiens in the landscape for many parts of Canada. Since impatiens were the floral mainstay of shade gardens, their demise left a vacuum in the world of shade landscaping that never was quite filled by New Guinea impatiens, begonias or other shade-tolerant annuals. In light of this background, it is exciting to learn that downy mildew-resistant impatiens have been developed: the Imara XDR series (1) from Syngenta and the Beacon series (2) from Ball. Testing of Imara XDR occurred both at Syngenta trial sites and confirmed at New York’s Cornell University by plant pathologist Margery Daughtrey. Testing of Beacon was done by plant pathologist Colleen Warfield at Ball’s facilities. Both labs found their respective series to be highly resistant to IDM. There is a lot of pent-up demand among gardeners and landscapers alike surrounding their impending commercial release this season. This is demonstrated by the 40 million Imara XDR seeds that were sold in North America last year in a pre-commercial soft launch of the product.

At the California Spring Trials, both the Beacon and Imara XDR series were front and center at their respective stops. The Imara XDR lineup from 2018 now has improved orange, purple and red colours with larger flower forms. The series is scheduled to add a red star and true pink in the fall to give a total of nine distinct colours. This series is also said to most closely resemble the Accent Premium series in form. The Beacon series has a similar form to Super Elfin impatiens and is currently commercially available in six colours with more in the development pipeline. The Ball catalogue will continue to offer missing colours in the susceptible genetics until the resistant types become available. Although both series are available commercially, widespread University trialling will continue this season in Canada and the US. The University of Guelph’s trials will include plantings of five distinct Imara XDR colours, six Beacon colours and two IDM-sensitive Super Elfin colours in its trial beds and commercial landscape sites that were inadvertently infected during the 2011-2012 IDM outbreak.

Seed prices for both Beacon and Imara XDR series have been kept low to encourage widespread production, but we will have to wait and see if the glory days of garden impatiens are set to return.

The XDR attachment to the Imara name stands for ‘eXtra Disease Resistance.’ Also under Syngenta’s XDR banner are selections of Catharanthus roseus (vinca) that form a series elegantly named ‘Cora.’ Cora XDR (3) selections have survived the screening by 20 different strains of Phytophthora nicotianae (the cause of aerial phytophthora blight) at Clemson University in South Carolina and have been shown to be highly resistant to 10 strains that are of major concern in the southern US landscape. There are 10 Cora XDR colours available; the colour red is not yet available in the XDR line but is still available as Classic Cora. In addition to phytophthora resistance, Cora vinca is known for its round blooms that exhibit little or no gapping between petals, short internodes and a free branching habit.

Spider mites have long been a problem with dipladenia/mandevilla growers. To address this pest, the new Dipladenia Sun Parasol Mite Buster Red (4) from Suntory has velvety leaves that have shown resistance to mite infestations throughout five years of trialling. This plant also has a brilliant red flower colour and bushy growth habit.

Withstanding the environment
The breeding of plant material to withstand environmental challenges is just as important to the grower and gardener as resisting disease pressure. I often get asked to speak on climate change gardening and what it means. To me, climate change gardening requires the selection of plant material that is resilient and that can perform well under wet and cool conditions one day, while withstanding droughty and hot conditions the next.

The Diascia Trinity Sunset (5) from Danziger seems to be one of those plants. It can handle summer heat while being resistant to rain damage and flower drop. To top it off, it is attractive! Traditionally, diascia (twinspur) has grown well in the spring and fall, being tolerant of cooler conditions, but it would also display less summer bloom production and be subject to severe petal drop during heavy rainfall. The weather tolerance of Trinity Sunset was first observed in a Michigan trial field where it was the only diascia to retain its blooms following a rainfall.

The SunPatiens breeding program at Sakata has recently incorporated genetic material from a drought-tolerant Indonesian species of impatiens to create a new class of Low Water (LW) New Guinea Impatiens hybrids. Orchid Blush (6) will be the first SunPatiens LW release in 2020. It has a compact growth habit and is reported to last a couple of days longer than the standard SunPatiens line before wilting. To gain the greatest benefits from LW genetics, it is suggested that SunPatiens LW not be mixed in a container with non-LW lines. More LW colours will be added with time; it is expected that Vigorous Orange will be next, followed by another five to six colours over the next five to six years. Sakata made an important note on the tour to remind growers not to use Bonzi on SunPatiens of any vigour, since the series is very sensitive to this plant growth regulator and improper application can seriously stunt the plant for the entire growing season.

Another shade plant that does well in the sun is the hybrid BIG begonia series. There seem to be few pests that bother this plant, and it is adaptable to a wide range of growing conditions. Benary is happy to announce a new colour in this series, that of BIG Pink Bronze Leaf (7) – pink on bronze foliage. The series now has a choice of red, rose or pink flowers on green or bronze foliage.

The hybrid genus, Petchoa, is the result of crossing a petunia with a calibrachoa. The SuperCal series from Sakata is one of the better known examples. This “all-weather” petunia has waxy petals that help with rain and drought tolerance. Indeed, a live display at the Sakata stop demonstrated the SuperCals’ bloom tolerance of constant simulated rainfall. Two new colours, Lavender Star (8) and Snowberry White, have now been added to the lineup for a total of 20 colours to choose from, including the five SuperCal Premium selections that have larger flowers than the standard SuperCal type and a mounding growth habit that is suitable for quart-sized production.

In the world of true petunias, Dümmen Orange has conducted some interspecific crossing with a wild mountain type of petunia that was extremely drought-tolerant. The crossing resulted in the release of Durabloom Royal Pink (9). Two other Durabloom colours, Hot Pink and Purple will also be in the University of Guelph’s trials this year. In addition to being drought-tolerant, it has a daylength bloom response and has vigorous landscape performance.

When considering weather tolerance and landscape petunia performance, we can’t forget Proven Winners’ Supertunia Vista and Ball’s Wave series. A white colour has been added to the Supertunia Vista series in the form of Vista Snowdrift, and, in recognition of excellent landscape performance, certain colours in the small-flowered Supertunia Charm series have been renamed to form the new Mini Vista series, including this Pink Star (10). In the Wave world of petunias, there are two new colours. The newly released AAS winner, Carmine Velour Wave petunia has the low growing spreading habit of Purple Wave, while the new Easy Wave Lavender Blue (11) has a taller habit. For some of us, it is hard to believe that the Classic Purple Wave petunia will be celebrating its 25th birthday. Perhaps it set a new standard for what should be expected as acceptable garden petunia performance.

Though these were the main highlights from my trip, there were many other examples of resilient plants on display at CAST, including ones from other classes of plants such as perennials, vegetables and woody plants. They may not have fit into the scope of this article, but know that plant breeders are working to produce more tolerant genetics against disease and environmental conditions, creating a better experience for growers and consumers alike. Stay tuned for more of my highlights in upcoming editions of Greenhouse Canada.

Acknowledgements: Thank you to Greenhouse Canada magazine and Ball Horticultural company for their financial and logistical support on this trip. Travelling by bus with Ball Hort, we were hosted by a number of breeders, including PanAmerican Seed/Ball Horticultural, Westhoff, Green Fuse, Gro-Link, Dümmen Orange, Proven Winners, Takii, Sakata, Danziger, Syngenta, Floranova, Cohen, Jaldety, Hishtil, Pacific Plug and Liner, and Benary.

Rodger Tschanz is the Trial Garden Manager at the University of Guelph. He can be reached at rtschanz@uoguelph.ca.

Related
A taste of unique, new edibles
Viewing the ‘new’ and ‘improved’ at CAST’17
Getting spring crop off to a good start
Coasting through California: A look at the 2018 California Spring Trials