Work with LEDs is continuing to dominate studies in both ornamental and vegetable crops. 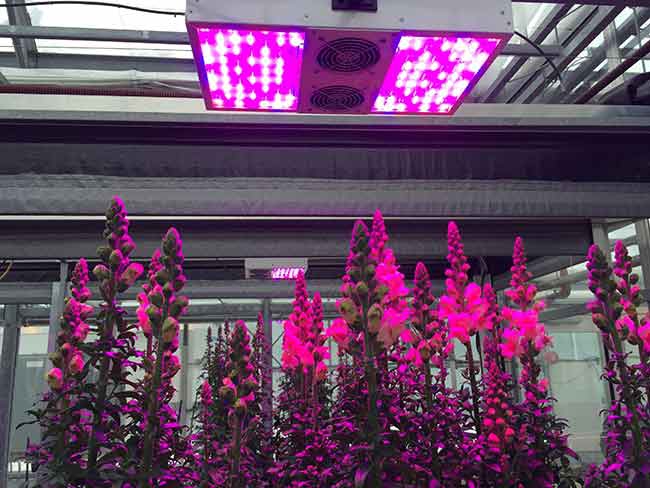 October 2015 – Greenhouse Canada magazine keeps a close eye on lighting research and developments, and in this story we present a roundup of the latest projects across Canada and beyond.

Work with LEDs, we found, is continuing to dominate studies in both ornamental and vegetable crops and in particular with supplemental lighting research.

Zheng is an associate professor and the “Environmental Horticulture Chair” in the school of environmental sciences.

The results showed that LED consistently performed as well or better than HPS for all growth, photosynthetic, harvest and postharvest metrics for cut gerbera (cultivars “Acapulco,” “Heatwave”and “Terra Saffier”).

Building on the above results and supported by the same funds, the researchers have also been working to determine the optimum crop-level intensity levels of LED assimilation lights for different ornamental crops.

The first test crop, studied last winter, was cut snapdragon. Zheng says the crops were supplied with LED lighting fixtures at various PAR levels, with a constant red:blue ratio of 4:1. The results will be presented at this year’s Canadian Greenhouse Conference, Zheng notes.

The researchers will be conducting trials this winter to determine the optimum supplemental light levels for cut gerbera.

This research group was also recently awarded support for a new project by the Ontario Ministry of Agriculture, Food and Rural Affairs (OMAFRA) – University of Guelph Research Program. The three-year project will involve partnerships with Heliospectra, Flowers Canada and some of its commercial greenhouse growers.

The goal is to develop protocols for using intelligently controlled (both in intensity and quality), multi-spectrum horticultural LED lighting systems for greenhouse ornamental crop production. Zheng says the optimization protocols will help reduce supplemental light energy consumption and also improve crop quality (for example, height control without or at reduced chemical growth regulator application rate). As of August, Zheng was recruiting graduate students to work on this project.

YEAR-ROUND PRODUCTION LIGHTING STUDIES AT HARROW: WHAT ARE THE EFFECTS OF LIGHTING ON PEST MANAGEMENT AND POLLINATION
Dr. Xiuming Hao, a scientist based at the Agriculture and Agri-food Canada (AAFC) Greenhouse and Processing Crops Research Centre in Harrow, Ont., is also involved in greenhouse lighting studies.

Among projects, Hao has been studying how supplemental LED lighting affects pest management in a variety of crops. This work has become increasingly important as more and more growers are considering year-round production.

In the past, biological control and bee pollination were often not as effective during the winter for various reasons, Hao noted last year, such as reduced light intensity, light quality and shorter day lengths.

“The use of supplemental lighting will play a major role in increasing production practices from November to March when quantity and quality of natural light are significantly reduced.”

In controlled environmental chamber trials using HPS and LED lights, preliminary test results show a beneficial impact in increasing the number of some predatory pests, depending on the source of the supplemental lighting.

Hao has also been studying how supplemental lighting affects bees and pollination. If lights come on earlier in the day, bees will come out earlier, but things have to be timed just right for the flowers to be open.

From the preliminary trials with bumblebees, Hao and his team have found the use of HPS lights seemed to increase pollination efficiency and resulting fruit yield and quality. He says additional laboratory and greenhouse trials need to be conducted to validate these early results in order to develop best management practices for biological control of greenhouse pests, and the use of bumble bees for pollination of greenhouse vegetables.

LIGHTING IN VERTICAL GROWING SYSTEMS THE FOCUS OF McGILL STUDY
Dr. Mark Lefsrud, a professor in the department of bioresource engineering at McGill University, is studying LED lighting in vertical agriculture using the Urban Barns Cubic Farm system. The multi-year project is supported by funding from the Government of Canada through NSERC (the Natural Sciences and Engineering Research Council of Canada) as well as by Urban Barns Foods.

Lefsrud has been conducting research on plant-specific light wavelengths for optimum growth for some time. He focuses on lettuce and tomato varieties as well as many other horticultural crops including strawberry, pepper, basil and microgreens.

“This project is focused on the refinement of the PAR efficiency (PAR curve) of plants using LEDs,” Lefsrud says. “This basic science research has resulted in testing on a ratio of LED lights including red, blue and amber wavelengths which have been shown to contribute to greater production in lettuce than with red and blue alone.”

He notes the LED arrays will be designed to provide control of the optimal wavelength and irradiance levels for the range of crops that can be grown in this system.

Doctoral graduate student Lucas McCartney says their research “has shown that with LED grow lights, we can have energy savings of up to 30 per cent. We continue to optimize the lighting system of the Urban Barns Cubic Farming system to maximize production and reduce energy costs.”

“We haven’t tried them in the winter yet,” says owner Eric Doef, “so we’ll learn a lot this year.”

They rely on HPS lights for the winter season with their year-round production of tomatoes, peppers and cucumbers heading into an eighth year.

Year-round production isn’t for every grower, but it makes sense for Doef’s Greenhouses because their winter season is strong in both sales and production, with good prices in the local markets.

When asked what advice he would give other growers about lighting, Doef says they should look carefully at replacement costs and the time it takes to change lights.

NEW CENTRE IN THE NETHERLANDS
In July of this year, global lighting firm Philips opened its state-of-the-art “GrowWise City Farming Research Centre” in the Netherlands. It’s situated within Eindhoven’s “High Tech Campus” technology hub, which houses more than 135 companies and some 10,000 researchers, developers and entrepreneurs.

Research at the Philips’ facility will focus on tailor-made LED lighting “growth recipes” for leafy vegetables, strawberries and herbs. Other areas of research will study ways to grow more carbohydrate-rich crops, such as wheat and potatoes, in greenhouses.

Philips has already equipped a number of “city greenhouse farms,” such as the GreenSense facility in Chicago (http://greensensefarms.com/).

MULTILAYER PRODUCTION SYSTEMS
With regards to ornamental studies, Dr. Roberto Lopez and his graduate students at Purdue University have observed that sole-source LED lighting can be quite effective. Lopez studied a system known as multilayer production, in which plants are stacked on top of each other on shelves.

The research is described as important because most ornamental seedlings are grown in greenhouses in the late winter and early spring, a time when sunlight levels are low, especially in more northern areas.

MAJOR LIGHTING CONFERENCE
Lopez and colleague Dr. Erik Runkle of Michigan State University are co-convening the “Eighth International Symposium on Light in Horticulture,” to be held May 22 – 26 next year in East Lansing, Mich.

Information on all types of electrical sole-source or supplemental lighting technologies will be presented, as well as new methods of sunlight manipulation through the use of coverings or glazing technologies. Other topics to be covered include the latest research on: