Collaborating with industry, this researcher is working to extend the lifetime of current TSSM management tools and create a brand new biopesticide for the grower’s toolbox. 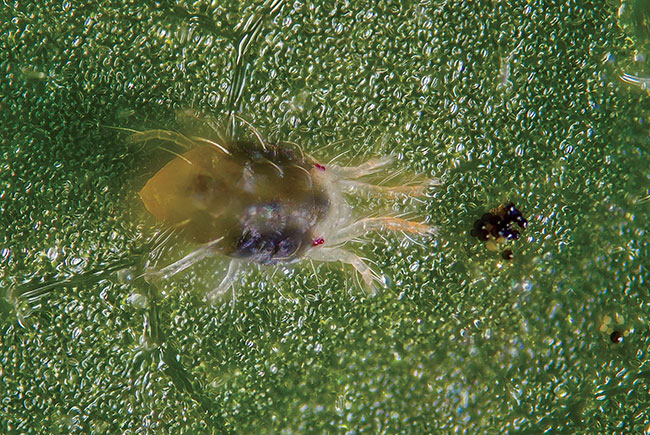 Growers who have encountered the two-spotted spider mite (TSSM) before may be all-too familiar with its uncanny ability to survive a number of different pesticides. The good news is, a new set of tools are being developed to target pesticide resistance in TSSM – one to prolong the lifespan of existing pesticides and another to bring a completely new type of pest control into play.

“It feeds on more than 1,100 plant species including more than 150 crops, which is an extraordinary ability,” explains Dr. Vojislava Grbic, associate professor and plant geneticist at Western University. Collaborating with her husband Miodrag, an entomologist who led a global sequencing project that mapped out the TSSM genome in 2011, both Western researchers have devoted the last 15 years of their work to understanding the biology of this generalist pest. With documented resistance to over 95 different active ingredients, TSSM’s ability to reprogram itself to overcome initially toxic pesticides is likely linked to its highly adaptable nature.

Adaptability key to its survival

When under attack, plants attempt to protect themselves by generating a shield of chemicals meant to deter or poison their attackers. Generalist pests can typically metabolize common defence compounds produced by most plants and survive to a large degree. In contrast, specialist pests have honed their craft to efficiently counter defences put up by their primary host, but these pests tend to be less successful when placed on an unfamiliar crop.

Albeit being a generalist, what makes TSSM so remarkable is its ability to adapt and specialize to new hosts. For example, a mite blown into a tomato greenhouse from a nearby soybean field might not be a problem at first, says Grbic. The tomato crop would be able to defend itself initially. But should the mite establish a sizeable population, particularly in a warm environment like the greenhouse, it can adapt, proliferate and cause a lot of damage in a short timeframe. Research has shown that TSSM can adapt to a new host after just 20 to 25 generations – equivalent to about six months.

“The mite has evolved the ability to detoxify a lot of plant defence compounds. As a result, what we’re seeing in agriculture is that biological property allows them to develop resistance to manmade chemicals – resistance to pesticides,” says Grbic. Populations of TSSM can also be resistant to multiple pesticides at once. In one extreme case, Grbic worked with a grower who tried five different pesticides, one after another, before succeeding with the sixth. “But by that time, the mite population had exploded, so he lost the part of the crop in that part of the greenhouse.”

Because of pesticide resistance, TSSM control can be highly inefficient for crops without effective biocontrol methods. To help reduce the current hit-and-miss method of TSSM management, Grbic’s team has been working on an IPM resistance management service (IPM-RS) that could help growers tailor TSSM control methods to specific populations in the greenhouse.

Similar to human genealogy kits, growers would collect plant samples containing different TSSM populations from the greenhouse, package them in the provided containers and send them off to Grbic’s lab. There, researchers would look for clues in the mite’s DNA, such as the frequency of resistant mutations occurring and heightened expression of suspect genes, then run models to predict the level of resistance or susceptibility of the mite population to different pesticides. After a few days, the grower would receive a report with details on which pesticides to avoid and a list of recommended pesticides that have a high probability of being effective and to what extent. “The grower or IPM specialist can then prioritize which pesticides they would use,” she says.

Having developed the system for abamectin and etoxazole, Grbic is working with Agriculture and Agri-Food Canada (AAFC), Ontario Greenhouse Vegetable Growers (OGVG), the Ontario Ministry of Agriculture, Food and Rural Affairs (OMAFRA) and Plant Products to confirm their models in commercial greenhouses before moving on to other pesticides. They hope to have a prototype ready in the next two to three years.

“We have to focus on extending the useful half-life of existing pesticides because it takes a long time to develop new technology,” says Grbic. “Because spider mites develop resistance so readily, the utility of these pesticides becomes somewhat limited once they are launched on the market.” 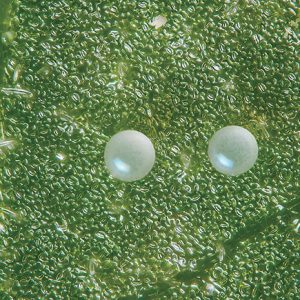 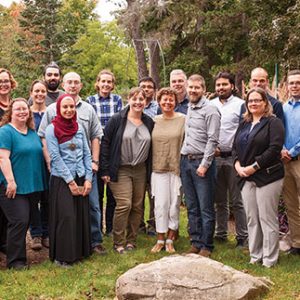 Pictured: Grbic and other experts at a precision agriculture workshop held in London, Ont. on September 24, 2018. One key topic was approaches to mite IPM. Photo credit: Mitchel Zimmer

While lengthening the use of existing pesticides, Grbic’s team has also been working on a completely different type of tool against TSSM – a biopesticide that uses a process known as ‘RNA-interference’ (RNAi) or ‘reverse genetics.’

Rather than applying a chemical that could potentially be detoxified and rendered useless by TSSM, the proposed biopesticide uses a type of genetic material known as double-stranded RNA (dsRNA). Because RNA normally exists in a single-stranded format and not double, the TSSM cell flags this dsRNA as being potentially dangerous, such as the result of a cellular error or strange viral RNA that must be eliminated. The cell then initiates a number of processes that then set out to dismantle, or ‘silence,’ any matching single-stranded RNA, including its own. By leveraging this natural form of self-policing in the cell, researchers simply have to introduce a piece of dsRNA that matches the code for critical enzymes in TSSM, and nature will take care of the rest.

Grbic’s team recently published a paper that demonstrates almost 100 per cent mortality of adult TSSM using RNAi-based biopesticides. Once applied, it can take five to six days for TSSM adults to perish, but they also cease egg-laying during that time, leading to a dramatic decline in numbers. While the technology looks promising, she says there’s still a lot of research to be done. “The goal is to not only find a target that is going to lead to fatality or at least reduce the mite population, it’s also important to find target sequences which are not variable in field populations of mites.” Because of the method’s specificity, the biopesticide may need to include multiple dsRNA fragments to account for genetic variability between different TSSM populations.

“RNAi is not a universal tool for all pests,” says Grbic, explaining how some other agricultural pests have naturally high gut pH or enzymes that degrade the RNA molecules before they can start the process. “But for mites, it works like a charm.” Because the biopesticide has to be ingested by TSSM and absorbed by the cells to work, her team is now collaborating with industry to develop a stable formulation that can sustain UV exposure and other environmental factors, ensure that RNA molecules reach their target, and degrade over time without harmful residues.

From lab to greenhouse

While their research has been successful in a controlled, laboratory environment, Grbic wonders if they might find something different in a real-world setting. “There are other factors that may influence mite responses that we’re not aware of, and we’re not including [them] in our experiments.”

Grbic’s team is looking to put their technology to the test and inviting interested growers to take part. With limited biological control options in greenhouse tomatoes and a shrinking array of TSSM pesticides available, she hopes to finetune both IPM-RS and RNAi-based biopesticides in this crop before moving onto others.

“It’s had a very long evolutionary time to evolve these unique features that we are just starting to understand,” Grbic says of TSSM. “It’s amazing how much we don’t know.”