Controlling an unexpected thrips influx from outside – a case study from Niagara, Ontario, 2016. How an innovative grower and his IPM advisors beat back a potentially devastating infestation. 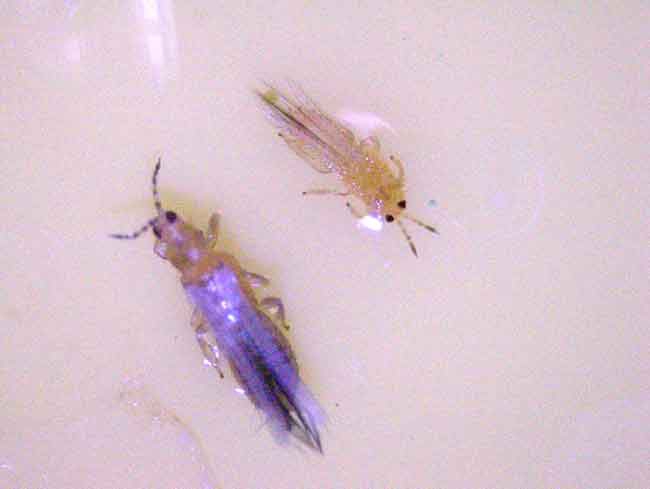 October 2016 – In early July 2016, after a very hot and dry start to the summer, reports emerged from a number of greenhouse flower growers of a sudden increase in western flower thrips being caught on sticky traps. This subsequently led to pest establishment and the sudden appearance of (sometimes) severe damage in a number of ornamental crops.

For the majority of these crops, biocontrol had been providing excellent thrips control throughout the spring. However, sudden increases in thrips pressure can make it difficult for predatory mite-based programs to cope. Predatory mites feed only on the first instar larvae of thrips, and a significant fly-in of thrips adults (and subsequent egg-laying) can overwhelm the mite population.

Chosen approaches to deal with this issue varied by different growers, with some abandoning their biocontrol programs and turning to biweekly pesticide applications. This article highlights a strategy employed in fall chrysanthemums (grown inside), where biocontrol was successful in overcoming a thrips outbreak.

The issue: The grower started to see an increase in thrips on sticky cards at the end of June and noticed severe damage showing up in the last week of June-first week of July (see Figure 1). The plants became heavily stunted and distorted.

Plant tapping at this point showed that all thrips being dislodged were adults. This, plus conversations with other growers who also had sudden thrips increase, strongly suggested a fly-in as the cause of the population increase.

Because there are few curative options for thrips outbreaks, discussions originally centred around the possibility of dumping damaged plants. Previous experience had convinced the grower that pesticides were not the answer. But clearly, their normal biocontrol program of predatory mites could not keep up.

The solution: The grower realized there was probably only one natural enemy with the potential to rapidly control such a large thrips population: the predatory bug Orius. It is able to eat all stages of thrips, including adults (consuming up to 35 adult thrips per day)1, and they kill more thrips than they eat.

SITUATION POSED SEVERAL MAJOR CHALLENGES FOR SUCCESSFUL CONTROL
Still, it was a lot to expect Orius to come to the rescue here, given the level of damage, the size of the thrips population, and that these plants were scheduled for shipping in four to five weeks.

It was also a concern that the crop was being grown under short days, and how this might affect Orius establishment and reproduction.

Given the lack of alternatives, the grower decided to go ahead and replace introductions of predatory mites with releases of Orius. Smaller introductions were made at first, but were increased in July to approximately 2.5 Orius per square metre for three successive weeks. This is close to the curative rate for heavy thrips infestations, recommended by the biocontrol producers.

In terms of chrysanthemum growing conditions affecting Orius, we often hear about how <12 hours of light can induce “reproductive diapause.”

People sometimes mistake this to mean that predators coming directly out of the bottle will eat prey, but not lay any eggs. Actually, since the adult Orius in the bottle were reared under proper light conditions at their source, they will, in fact, lay eggs. These eggs will develop through to adults and help contribute to thrips control. However, a third generation will not be produced, which is one reason why weekly Orius introductions were made.

The grower thought about dumping the most heavily infested mum varieties, but decided to keep them in the end, as they appeared to draw thrips away from other colours. The assumption was that these plants may end up acting as trap plants, reducing thrips pressure on the rest of the crop. With a localized concentration of thrips, these plants might also have served a dual purpose as make-shift banker plants, helping with establishment and breeding of the predator.

As a final line of defence, the grower also put up large quantities of blue sticky tape throughout the crop to reduce numbers of thrips adults. Remember, for every adult thrips you’re able to trap, you potentially prevent 300 new baby thrips from emerging in your greenhouse2. (For more information on mass trapping, check out “Sticking” it to high populations of thrips, posted to the ONfloriculture website at https://onfloriculture.wordpress.com.)

The results: The grower assessed thrips pressure and Orius populations by shaking out entire plants and counting the ratio of Orius to adult thrips and immature thrips nymphs. Sticky cards were placed in one of the most severely affected varieties and changed daily to have additional numerical data on the progress of the program.

The charts above on this page (Figs. 3 and 4) show the thrips population trend over July and August. The arrows in Fig. 4 indicate introductions of Orius. Smaller introductions were made at the beginning, with the bulk of Orius introduced between July 5 and 26.

As you can see from both thrips counts on the whole farm, and from the most severely affected area, thrips numbers dropped by the end of July. High numbers of Orius (and mites) were also found in the crop at this time; thus, no further releases were made.

By early August, it was difficult to find thrips anywhere in the crop. All plants, including the plants sacrificed as trap/banker plants (initially showing heavy damage), finished and shipped successfully (Figure 2).

What We Learned: This “rescue operation” proved successful beyond our expectations. Admittedly, the cost of the program was significant, but the alternative (dumping the crop) would have been even more so.

The experience was a valuable learning experience in biocontrol and in dealing with the unexpected in pest management.

A TIMELY RESPONSE BY GROWER WHO QUICKLY RECOGNIZED THE SERIOUSNESS OF THE PEST LEVELS
One factor in the success of this program was likely the grower’s ability to quickly recognize something seriously abnormal about the pest levels in his crop. This allowed him to switch tactics relatively early, avoiding further damage and giving plants time to grow out of their damage enough to be saleable (even though the severity of the initial pest damage made this seem like an unlikely prospect).

This highlights the importance of regular pest monitoring, record keeping, and regularly walking the crop to look for damage, or just something “unusual”.

The program likely would not have been as successful without the combination of different IPM tactics, including mechanical controls (mass trapping), cultural controls (trap cropping) and biocontrol.

Not every grower in a tough situation is going to be willing to experiment with biocontrol, but in this case, the decision paid off. With continued innovation on the part of growers in the Niagara region – leaders in the global greenhouse industry –  successful case studies like this will be the norm.