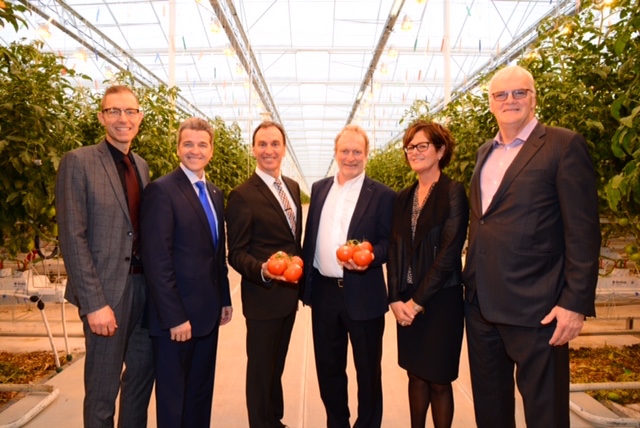 On hand for the inauguration were representatives from various food chains and wholesale distributors. The $25 million expansion of the facility was made possible by financial support from the Fonds de solidarité FTQ, Desjardins Capital and Capital Financière agricole, as well as by a strategic partnership with Waste Management (WM).

The new greenhouse triples the size of Demers’ facilities in Centre-du-Québec, going from 3.2 to 10 hectares, and marks the completion of phase two of a $40-million project that has created upwards of 90 jobs in Drummondville.

Its production capacity of over 100,000 kg per week (6,000 tonnes annually) will ensure a steady, ample supply for local food chains and wholesale distributors.

As winter approaches, consumers who seek fresh local produce will be delighted to learn that thanks to this new greenhouse, tomatoes will be readily available in all of Québec’s large supermarket chains.

In 2012, Waste Management (WM) commissioned a power plant in Drummondville that uses biogas to power its engines, connected to generators. WM developed an ingenious process whereby the heat generated by the engines is recovered and used as a source of energy by Demers.

Based on heat recovery and the use of biogas, the company’s one-of-a-kind production model avoids the need for traditional fossil fuel to heat the greenhouse, thereby cutting GHG emissions by over 26,000 tonnes annually. As well, local production means less time to reach the grocer’s shelves, thus responding to a growing consumer preoccupation with freshness.

Greenhouse tomato production is in line with the food industry’s futuristic new vision. To meet consumer needs and expectations and remain competitive, the industry must innovate to raise its productivity.

Local production meets the consumer’s desire for freshly harvested produce year round that is nutritionally superior to imports and available at Québec’s large food retailers.

The Québec government and Hydro-Québec also played a role in the greenhouse project. Utilizing the province’s surplus power as an economic lever is a winning strategy for everyone since not only does it generate significant economic activity, it makes it possible for Quebecers to consume more local fruits and vegetables.

“Going forward, our customers can count on us to provide greenhouse tomatoes even in winter since we can now meet the needs of the various supplier networks,” said Demers.

“Through our marketing efforts, we will decrease the need to import produce, especially from Mexico.”

“We are proud to be a partner in this model sustainable development project by providing affordable renewable energy from biogas recovered from our landfill,” said Simon Mercier, general manager of WM’s Québec landfill. This project contributes to Drummondville’s circular green economy by reusing energy waste and in so doing, initiating a new cycle of green production.”

By prioritizing agri-food in its strategic planning, the Fonds de solidarité FTQ is looking to give Quebecers greater access to fresh local produce. “The 100,000 kilograms of tomatoes that will be coming out weekly from the new Demers greenhouse will not only be eco-friendly but available year round,” said Normand Chouinard, executive vice-president of investments at the Fonds de solidarité FTQ.

“By tripling the size of its tomato greenhouse in Centre-du-Québec, Productions Horticoles Demers cements its leadership in the market,” said Luc Ménard, chief operating officer at Desjardins Capital. “We’ve been supporting this SME since 2011 and are proud to continue to do so. As a patient investor, we commend the vision and innovation of the management team behind this Québec agri-food jewel.”

“Demers’ ability to build lasting business ties and focus on growth is inspirational. A partner since 2003, Capital Financière agricole is proud to once again back this key project in Québec’s agri-food industry.”