André Mousseau, the province’s leading cactus producer, was awarded the 2005 Prix Croissance during last fall’s Ornamental Horticulture Trade Show in Saint-Hyacinthe. He is a visionary and developer who has contributed significantly to the expansion and recognition of the industry in Québec. 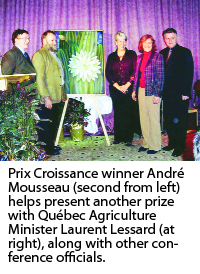 In addition to the recurring themes of energy costs, taxes and marketing, growers adopted strong resolutions on several other emerging issues.

Ancillary products: Retail sales on farms have become a sore spot between producers and Québec’s Agriculture Commission, which prohibits retail sales – other than plants – by many producers who currently sell all or most of their production on-site. The SPSQ wants the government to allow the sale of products produced elsewhere, including pots, manure and compost, and recognize that selling these items is an integral part of plant sales.

Skilled labour: The SPSQ will also begin working with educational institutions in the province to increase the number of graduates entering the sector. According to StatsCanada, some 7,400 workers are employed in Québec greenhouses, and growers report increasing difficulty finding skilled employees.

Job forum: Jobs were a hot issue at the trade show, with Québec’s Institute of Human Resources in Horticulture (IQRHH) organizing an employment forum. Included were job postings for visitors, which caused bottlenecks, particularly among younger visitors.

Annick Hamelin said she was “thrilled to peruse job postings while at an industry expo.” Armed with a résumé and a cheery smile, the 20-year-old Québec City student was using the three-day event “as a launch pad” for her career search. “I’m learning new procedures and technologies in greenhouse production,” said Hamelin, “and while I’d like to work in a modern setting that employs new technology, I’d be happy to be part of a team that can bring those changes to an older operation.”

INNOVATION AWARDS
Laurent Lessard, Québec’s Minister of Agriculture, Fisheries and Food, presented awards to companies whose horticultural innovations are distinguished by originality and quality, as well as innovative service to both industry and the greater public.

Recipients included: Arrosage St-Elie of Sherbrooke for lawn maintenance services using a team of cyclists; Bertrand Dumont of Boucherville for three books on plants and pesticide-free gardens; and Soleno Textiles of Laval for its Aquamat water conservation system.

Also awarded was the Prix Croissance, FIHOQ’s highest honour. SPSQ president André Mousseau is this year’s recipient, who as a visionary and developer has contributed significantly to the expansion and recognition of the industry. “Mr. Mousseau is in good part responsible for the range of professional services and organizations available today for our industry,” said expo manager Aline Munger.

NEW MANDATE
For its part, IQRHH is now recognized as a Québec workforce sectorial committee, says spokesperson Josée Mireault.
“This means that we are officially mandated to see to the development of the workforce and best practices in human resources management for businesses working in ornamental.” The strategy calls for the mobilization of businesses, workers, and experts in the labour market, she says, “who are in the best possible position to acquire expertise on the problems of the workforce and gain the right ingredients to find solutions to those problems.”

Along with a new mandate comes a new title. IQRHH is now HortiCompétences‚ and president Daniel Cléroux says despite employing some 30,000 people, “ornamental horticulture is a relatively young sector, not well known, (that’s) in constant growth and creating jobs.”

The human resources program is critical to the success and growth of the sector, he said, citing numerous challenges. For example, “a great number of jobs are seasonal, and so this necessitates a constant search for solutions for employment stabilization.”

Training and recruitment, recognition of worker skills, improvement of HR practices, and health and occupational safety are all front-burner issues. Some projects have already begun addressing these issues, such as the Réseau Stabili-Travail employment stabilization project in Monteregie region, promotion of best practices in health and occupational safety, and projects for integrating handicapped and older workers.

LES FLEURONS DU QUÉBEC
In addition to staging the show, FIHOQ – in which greenhouse operators play a vital and central role – is a founding partner in an initiative that will boost the industry. Les Fleurons du Québec is a province-wide project that will recognize Québec municipalities and gardeners for beautification efforts through horticulture.

Much more than a gardening contest, Les Fleurons du Québec will motivate cities to improve their horticultural and landscape environment each year, while respecting the principles of sustainable development. Classification consists of allotting participating towns from 0 to 5 fleurons, or florets, to be posted in official tourist guides, on road signage, and in other places. Recognition will have an unquestionable impact on horticultural tourism, the strongest growing tourism niche in Canada. Following a test project in 18 cities last year, organizers are ready to go ahead with what they say is the greatest boost to Québec’s ornamental horticulture industry in a long time.

Ornamental horticulture is responsible for tens of thousands of Québec jobs. Gardening is the second most popular hobby, and for more than two decades, the “Fleurir le Québec” contest helped boost sales and interest in decorative plants. “It was the most successful project in recent years in terms of supporting the industry,” said FIHOQ director Luce Daigneault.

Last year, Québec’s agriculture ministry began looking to modernize the contest, says Daigneault, and struck a cross-sector committee, which found that Fleurons du Québec will better respond to the interests of towns and their citizens. More specifically, says Daigneault, “the new project will have towns competing against themselves and not against each other.”

Simply put, it’s a win-win situation. The awarding of florets will be a mark of prestige, instilling local pride. Indeed, the word “fleurons” can loosely be translated as “we flourish.”

Starting this summer, “up to 150 municipalities will be evaluated on a first-come, first-served basis, with the aim of classifying 600 towns by 2009,” said Michel Belzil, of Québec’s Federation of Municipalities. A “Fleurons Québec route” is planned to attract gardening enthusiasts to tour the province.

Other founding partners include the Union of Québec Municipalities, Québec’s Federation of Ecologic and Horticulture Associations, and the Québec Association of Greenspace Managers.