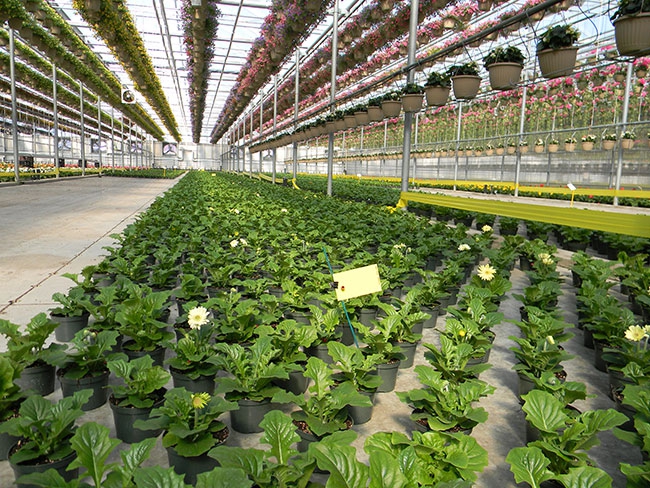 Food carbon calculators and apps are now available to help consumers make lower carbon choices, and some of these consider how food is grown.

February 2015 – An increasing number of greenhouse growers are using biocontrol as a primary component of their pest management strategy. However, as the number of simultaneous biocontrol agent (bca) releases grows, so does the complexity of insect population dynamics, and related management decisions.

It is perhaps easiest to understand pest-predator interactions when only two predators and one prey species are involved, but this becomes complicated as the number of natural enemies increases. One team of researchers in the Netherlands, led by Dr. Gerben Messelink, is working to solve some of the underlying questions related to the effects on pest populations when generalist predators are used simultaneously with specialized natural enemies in greenhouse crops.

Dr. Messelink’s team tested a predator/parasitoid food web that included the hyperpredator Neoseiulus cucumeris that feeds on one pest (thrips) and affects the reproduction of one biocontrol agent (Aphidoletes) versus a food web representing intraguild predation that included the predatory bug Orius majusculus that feeds on two pests (thrips and aphids) and affects the reproduction of two biocontrol agents (Aphidoletes and Aphidius colemani).

At the outset of the experiment, the researchers expected aphid populations to increase in all trials as both predators prey on some of the other participating natural enemies in the environment, potentially disrupting existing control.

Aphid populations increased rapidly in the treatment that included N. cucumeris, as expected. Contrary to hypothesis however, aphid populations were effectively controlled in the treatment that involved O. majusculus. This may be due to the ability of the predatory bug to effectively consume enough aphids to aid in overall control, thus counteracting the detrimental effect of intraguild predation. In contrast, because N. cucumeris does not interact directly with aphids, the impact of feeding on A. aphidimiza could not be minimized and control suffered.

During this experiment, Orius populations continued to increase for the duration of the trial, thereby asserting control on both aphids and thrips. In fact, the presence of thrips may have contributed to the control of aphids by providing an additional food source to sustain a robust Orius population. In contrast, hyperpredatory mite densities suddenly decreased in the middle of the ten-week trial, allowing aphids to increase.

At first glance, releasing generalist predators into a multi-faceted biocontrol program may potentially put a successful outcome at risk. However, as illustrated by the work of Messelink’s team, the outcome may depend on the choice of the appropriate biocontrol agents to determine control of the target pest.

Related
Inside View: February 2008
New age biologicals
Pirate Bug tag-team is double-trouble for thrips
Why bees are such super pollinators