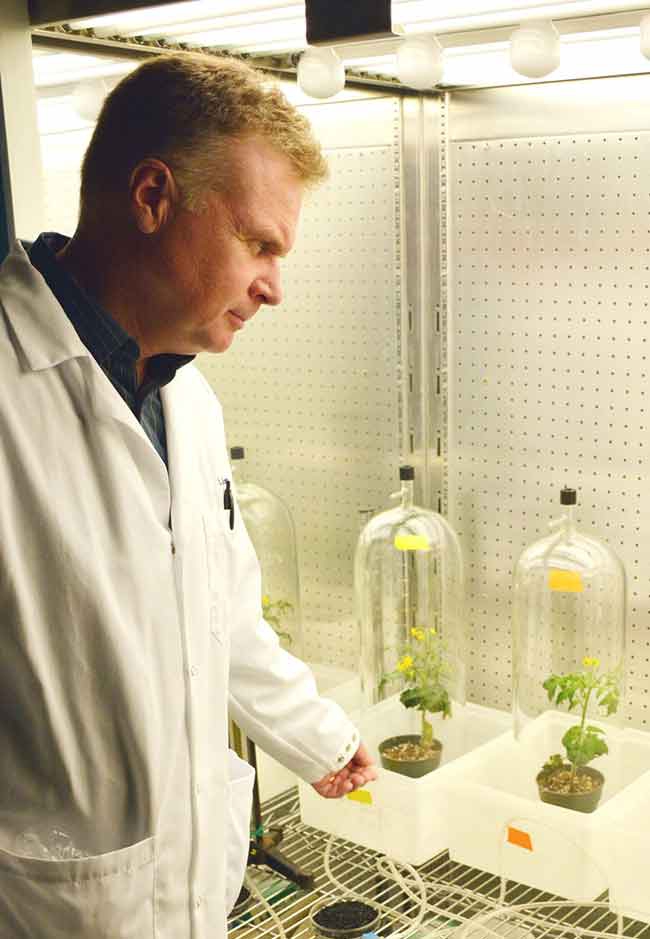 September 2016 – Greenhouse tomato growers may soon have another tool in their IPM toolkit, thanks to research at the London Research and Development Centre of Agriculture and Agri-Food Canada.

Entomologist Dr. Ian Scott is leading a team studying how plants attract and repel insects based on volatile chemicals released from their leaves and flowers.

This information can then be used to see which plants would be best at either attracting or repelling pests. These plants could then be applied within a “push/pull” strategy to help reduce insect damage in part by minimizing egg-laying on commercial greenhouse crops.

In “push/pull” the repellant plants are used to drive pests away from nearby crop plants, while the attractant plants would lure the pests towards them. The net result, then, would be much less pressure on the commercial crop.

The work is now looking at greenhouse tomatoes, and the pests being targeted are two major threats – cabbage looper and whitefly.

He joined the London AAFC research group nine years ago.

Transgenic breeding work by AAFC colleagues in Saskatoon and London demonstrated that volatile compounds released by flowers and leaves could be increased. These volatiles have an effect on insects in terms of their interest in feeding on those plants.

Scott studied the insect response to these new transgenic tomato research plants and found that some genotypes were much more attractive to certain pests, specifically cabbage looper and whitefly.

This gave him the idea to do further studies with these plants to see if they could be used in a push/pull strategy. “The idea is to reduce the insect pressure on the main crop by providing other plants as the trap crop that are more attractive to the pest.”

The team is now developing other transgenic plants that will improve the “push” qualities, and to identify the volatile chemicals being released. “We want to know which are the more important compounds that are attractive and repellent to insect species,” says Scott.

This work is currently at the lab stage. Eventually they will move into small-scale experiments in a greenhouse using a main tomato crop and the trap plants.

Scott will also determine the optimal number of trap plants required in a commercial setting to affect the push/pull strategy. “They can’t take up too much space from the commercial crop. It has to be cost-effective for growers.”

Hopefully the use of trap plants won’t affect predators and bees used by the greenhouse industry. “Bumblebees are used for pollination services and for vectoring other biopesticides. We would hope this interaction wouldn’t interfere with what they normally do.”

Push/pull would be a part of an overall IPM program. “It will just be another tool growers could use to reduce pest pressures on their tomato crops.”

If it works with tomatoes, other greenhouse crops could also be studied. “If this is successful and looks promising with tomatoes, we would definitely be interested in looking at other vegetable crops.”

It could also be applied to ornamental crops, he adds.

“And it could very well branch off into other horticulture crops.”

This is the first year of a three-year study that concludes in March 2018. It addresses greenhouse pest control measures, pesticide resistance and environmental sustainability.

Related
An e-GRO Alert:Time for thrips already?
On Call in the Bug War
Silicon effective against powdery mildew in verbena
Keeping mildew off your basil