With the cold season reluctant to leave, mice continue to seek bed and board which is not good for your plants. You may already have seen evidence of their gnawing at the base of some small trees. 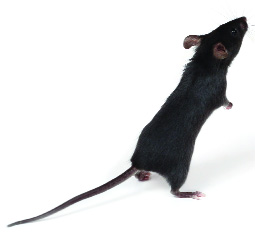 With the cold season reluctant to leave, mice continue to seek bed and board which is not good for your plants. You may already have seen evidence of their gnawing at the base of some small trees.

Mostly, it is meadow mice, also known as meadow voles or field mice, which do the damage. They are most at home in tall grass where they can feed, nest and scamper about shielded from the eyes of hungry hawks, owls and other predators. Unfortunately, from fall to spring, meadow mice like to supplement their diet of grasses and herbs with the bark of trees.

The first line of defence is to make your yard inhospitable to meadow mice by mowing your lawn as late and as closely as possible. A few mice will still be brave enough to scoot across your mowed de-militarized zone, so further protection is needed, at least for the young trees that mice find most appealing.

Thwarting bark-eating mice does not stop there. Straw, leaves and  other organic mulches are beneficial for the soil and for plants but also provide cozy lodging for mice. So hold off spreading these mulches until mice have found other places in which to settle for the winter. And never pile any mulch right up against a tree’s trunk, or you will give mice easy food and lodging.

Meadow mice are probably the worst mouse culprits in the garden this time of year. House mice might also do some damage, but prefer to feed and live in our houses. Deer mice, the cutest of the lot, with their white bellies and oversize eyes and ears, feed mostly on seeds, berries, nuts and insects, so are off the hook for now.

You might point an accusing finger at moles, but don’t. Moles are mostly carnivores. If you are going to fault them for anything, fault them for feasting on earthworms and for lending mice the occasional use of their tunnels. ‘Mouse runs’ are established at the ground level, while moles tunnel below ground.

Mice can bear up to five litters per year of five babies each. When mouse populations soar, more heroic control measures are needed, including trapping, even poisons. The real-life creatures may look as endearing as Mickey Mouse, but do not be fooled. Besides damaging plants, mice also spread such ills as Lyme disease.

Ancient genes dictate flowering, fall bud set
It often requires many years of growth before a tree is ready to flower. Now, scientists at universities in Sweden and the U.S. have discovered the genes responsible for initiation of flowering.

In the annual plant Arabidopsis, the first plant to have its genome sequenced, the genes Constans (CO) and Flowering Locus T (FT) induce flowering in response to day length. It turns out that Populus trees (aspens, cottonwoods, poplars), the first tree to have been sequenced, also have CO and FT genes and can be forced to flower in months, rather than years.

Scientists found the FT gene controls not only the multi-year delay in flowering in trees, but also controls seasonal growth cessation and bud set.

Scientists also looked at the genetics that signal fall growth cessation and bud set. They discovered that CO accumulates in response to long days, initiates the formation of FT, and in the short days of fall, the pattern of CO changes so that FT is not activated.

The same species of tree at different latitudes responds to local conditions in order to become dormant before the risk of frost damage. Because the short day-lengths occurring in fall induce bud set, the   scientists wondered if FT and CO also controlled this process. When they grew trees originating from different latitudes in Europe in a growth, the team observed that the response is under strong genetic control and is maintained when trees are moved.

The CO and FT genetic pathway appear to be the key to understanding adaptation to climate change, as well as to speeding tree breeding.