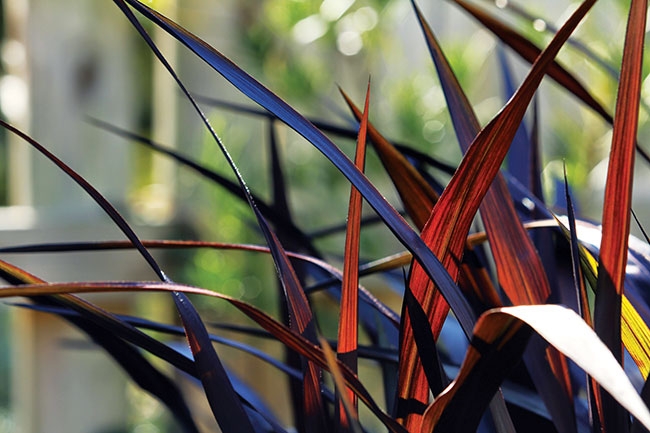 Choosing the Right Cultivars
When considering which grasses to produce for cut flower use, the first decision is whether you’re looking for foliage or plumes. Many varieties offer striking colouring or variegation but not much in the way of a flower. In contrast, others produce striking plumes with unremarkable foliage. Here are a few of our picks in each category:

Cultural Considerations
In outdoor production, grasses are a natural – they’re tough and grow even in soils that have little fertility. For all grasses, choose a well-draining commercial media if you’re producing indoors. Apply a preventive fungicide drench at transplant, then follow with a monthly broad-spectrum fungicide control program – especially important for keeping foliage clean for cuts. Space plants to ensure good airflow and further reduce fungal pressures. Grasses in general prefer full sun or at least 5,000 foot candles of light.

In most grasses, diseases and pests won’t be an issue, as long as your production plan includes regular sanitation protocol. A proper preventive program should also include diligent, scheduled scouting and monitoring. If you’re producing indoors, be sure to provide as much light as possible, maintain plenty of airflow and manage humidity well.

Be careful not to over-fertilize. A fertility rate that’s too high can lead to weak, leggy growth that can be more susceptible to various leaf spots. Aim for medium fertility levels of 150 to 200 ppm nitrogen for most grasses. You’ll want to back off a bit for some, such as the Pennisetums and Arundo Peppermint Stick, with about 100 to 150 ppm nitrogen. And Panicums like Bad Hair Day prefer even less (just 50 to 75 ppm nitrogen).

For flowers, providing some sort of windbreak in windy areas can help protect blooms.

Most grasses finish in approximately eight to 10 weeks, with a few exceptions such as Arundo Peppermint Stick (6-8 weeks), Juncus Big Twister (7-8 weeks) and Pennisetum setaceum (10-12 weeks).

Josiah Raymer is head grower and general manager for Emerald Coast Growers. He can be reached at 877-804-7277, sales@ecgrowers.com or
www.ecgrowers.com.