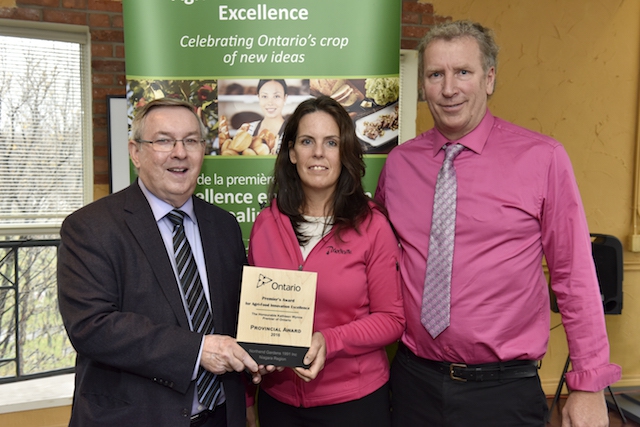 Dec. 21, 2016, Jordan Station, Ont. – The Niagara greenhouse operation behind the North America introduction of one of the most talked about plants in the potted plant market has received a 2016 Premier’s Award for Agri-Food Innovation.

Northend Gardens, owned by Ted and Carrie Oorsprong, has been growing and promoting the popular Medinilla Magnifica for the past several years.

“While visiting family in the Netherlands, the owner of Northend Gardens discovered Medinilla Magnifica, a pink cascading flower unknown in Canada and the United States,” notes the award backgrounder.

“After acquiring the exclusive rights for North American distribution in 2010, Northend Gardens set out to adapt these tropical blooms to Ontario’s growing conditions. They soon found out that the flowers required a very specific light, water and temperature regime as well as a precise growing schedule. With the help of a team of researchers and consultants, 60,000 plants were successfully produced in 2011 and by 2016, annual production hit nearly 100,000.

“With no shortage of customers, Northend Gardens has staked out a high-end niche, selling their medinillas wholesale for $10 to $17 per plant.”

Award recipients are recognized for their contributions to boosting economic growth in Ontario by creating new products that help to support job creation, add value to existing products and support a sustainable environment.

They are also helping Ontario meet the Premier’s Agri-Food Growth Challenge by supporting the province’s efforts to double the growth rate of the agri-food sector and create 120,000 jobs by 2020.

• This year marks the 10th anniversary of the Premier’s Awards for Agri-Food Innovation Excellence, established to recognize and foster agri-food innovation across the province.

• Fifty award recipients will be recognized this year, including the top Premier’s Award, Minister’s Award, and three Leaders in Innovation award winners.

• Since 2007, a total of 475 producers, processors and agri-food organizations have received a Premier’s Award for Agri-Food Innovation Excellence.

• Ontario’s agri-food sector supports more than 790,000 jobs and contributes more than $36.4 billion towards the province’s GDP.

• Ontario’s food and beverage processing sector remains strong with the presence of more than 3,800 companies, 96,600 jobs across the province.